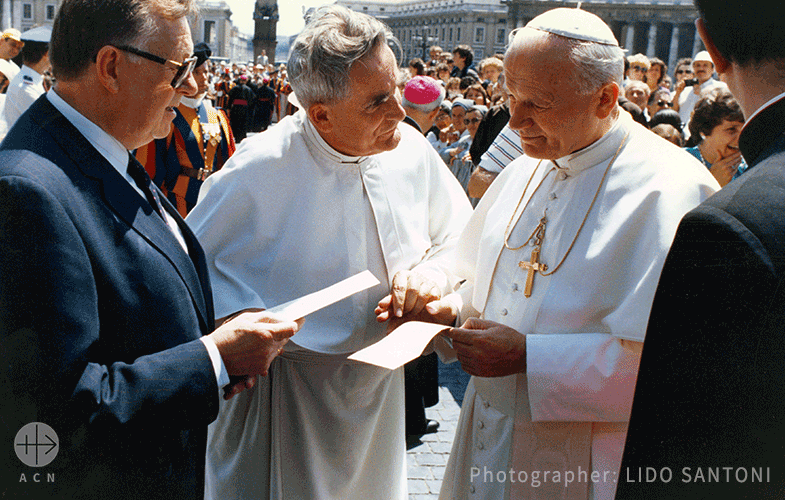 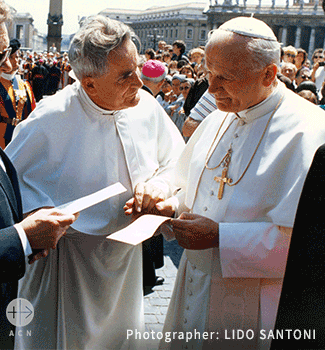 100th anniversary of the birth of Pope Saint John Paul II – ACN remains faithful to his legacy to this day.

John Paul II made history during his lifetime and became one of the giants of the 20th century – both in the history of the Church and of the wider world.

by Maria Lozano.
In his early years he was a media star, and in the subsequent and final years a veritable martyr, when it became clear that he would defend the truth without compromise, yet with love. Likewise unwavering, profoundly committed and historic in their dimensions were the projects he promoted and which on so many occasions the international Catholic pastoral charity and pontifical foundation Aid to the Church in Need (ACN International) has made its own. 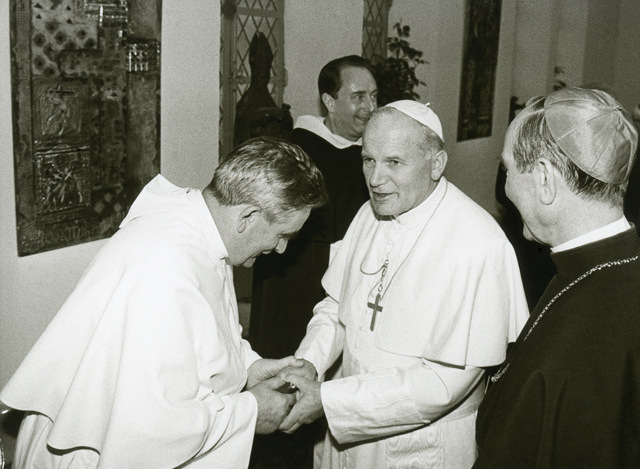 “Pope John Paul II is a friend of our charity”, wrote Father Werenfried van Straaten, the founder of ACN. “We know him as a man of great courage, unwavering in his faith and with a filial love for the Virgin Mary. God willing, under his guidance may the resurrection of the Lord become a resurrection of the Church.” The 18th of May this year will mark the 100th anniversary of his birth. Today ACN continues to commend its activities to the intercession of Saint John Paul II.

ACN’s earliest contacts with Karol Wojtyla go back to even before he was appointed Archbishop of Cracow in 1964. For many years, as the representative of the Polish bishops’ conference, the man who would later be elected as Pope in 1978 had been in contact with the charity to discuss projects for the support of the Church in Poland, which was then under Communist rule. 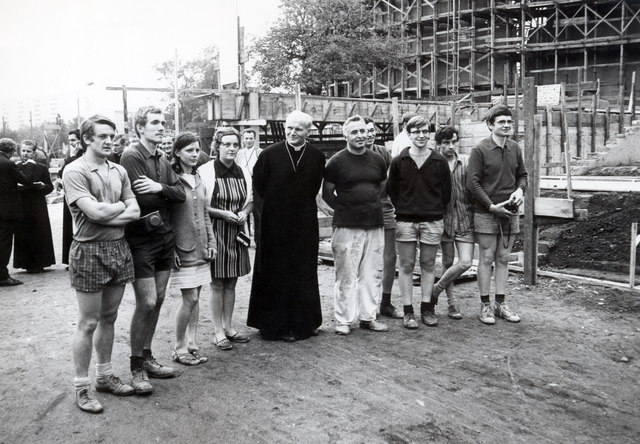 Poland, 1977 Construction of the church in Nowa Huta. Visit of Cardinal Karol Wojtyla. Copyright: Aid to the Church in Need.

The first time ACN “joined battle” on his side was in 1967 when the Communists built a satellite city on the outskirts of Cracow for steelworkers at a large smelting plant. Their plan was to build a “city without God” for up to 200,000 people and, in line with their imposition of an atheist ideology, they included no plans for a church of any description. But in spite of this, in the new town of Nowa Huta, on Sunday after Sunday, thousands of Polish Catholics gathered around a large cross, in all weathers, to join in the celebration of the Catholic Mass. And despite all the tricks and stratagems of the Communists to try and deter them, they finally managed, with the financial support of ACN, to build a vast church there, big enough to accommodate 5,000 worshippers. In 1977 Archbishop Wojtyla was finally able to consecrate this church. This shared victory against the Communist government also sent a profoundly encouraging signal to the neighbouring countries, similarly oppressed by Soviet Communist rule.

When Karol Wojtyla was finally elected Pope in 1978, ACN sensed that a new era was opening up, filled with new challenges for the foundation. This Pope from the East, from the martyred Polish nation, was a sign from God for ACN, which had long been a courageous defender of the persecuted Church behind the Iron Curtain.

ACN immediately placed itself unconditionally at the service of the pontificate of the future Saint John Paul II, as witnessed by the numerous pastoral projects sponsored by the charity. One of his profound desires was for reconciliation, and thus it was that, following the collapse of Communism, he entrusted to ACN the work of reconciliation with the Russian Orthodox Church. To this end, and despite his advanced age, Father Werenfried travelled twice to Russia to meet with the Orthodox Patriarch Alexei II and many of the other Orthodox bishops, to whom he promised his prayers and support. At the time both the Orthodox and the Catholic Church in Russia had to start again from scratch, after 70 years of persecution. 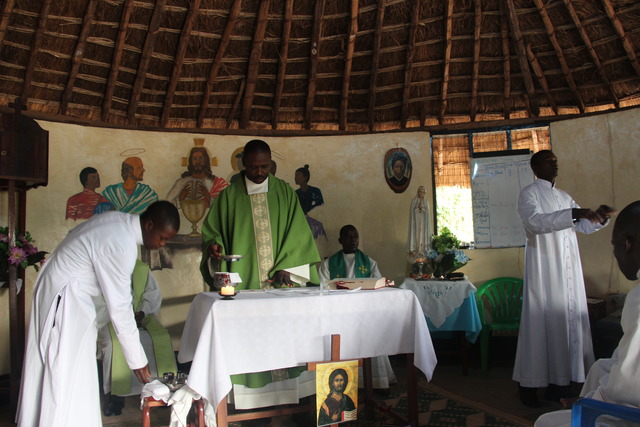 Pope John Paul II lived with God, worked with God, broke new ground with Christ. For 27 years he was Christ’s representative on earth, writing 14 encyclicals and around a hundred apostolic exhortations, as well as innumerable letters and homilies. In over a hundred different apostolic journeys, he visited more than 130 countries and was seen in person by around 400 million people. He brought together and inspired millions of young people. In Manila, in the Philippines, he celebrated Holy Mass in front of 4 million people – the largest human gathering of all time. 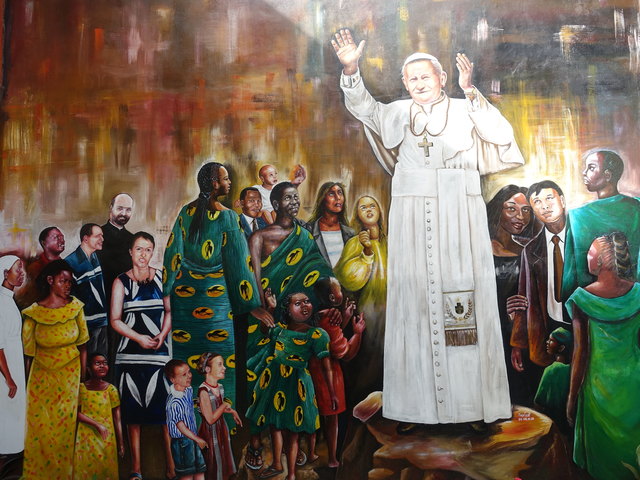 Saint John Paul II was able to personally witness the fruits of ACN’s work. During his first visit to Kazakhstan in 2001 a little boy proudly presented him with a copy of the ACN Child’s Bible, printed in his own Kazakh language. The Pope was delighted to see this little book, because it was he who had first inspired its publication, in January 1979 in the city of Puebla, Mexico, when during his first foreign visit as the newly elected Pope he presided at the Plenary Assembly of the Latin American bishops. It was at this assembly that Father Werenfried suggested to him that children needed something like a little Bible “so that the image of Jesus could become a living one in their hearts”. From this encounter was born the famous ACN Child’s Bible “God speaks to His Children”, one of the largest projects ever supported by ACN. Years later, in Kazakhstan on the other side of the world, Saint John Paul II was able to accept the gift of this little book and put it in his suitcase.

“The last time the Holy Father and Father Werenfried concelebrated the Eucharist together was in springtime. It was in April 2002; John Paul II’s breathing was already becoming very laboured. At the end of the Mass he was barely able to speak. They smiled at each other; they embraced. In a gesture that said everything, the Holy Father gave Werenfried his own Paschal Candle, together with an icon of the Black Madonna of Czestochowa. It was their last earthly farewell.” That was how their last meeting was described by the Italian journalist Orazio Petrosillo, who himself died in 2007 and who personally witnessed their encounter. 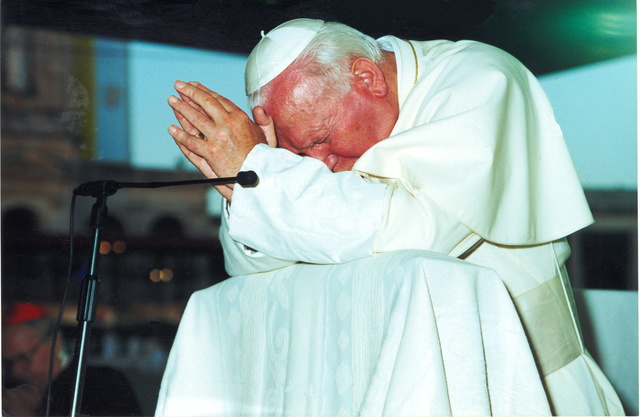 100 years after his birth, he has left behind an immense legacy, and one to which ACN has striven to remain faithful up to the present day. So many of the projects supported by the foundation now bear the name of this holy Pope, who was canonised in 2014. For example, the diocesan seminary in Tombura Yambio in South Sudan, the catechists’ centre in Itigi in Tanzania, the pastoral centre for young people in Sarajevo, in Bosnia, and the Pope John Paul II Institute for the Family in Cotonou, Benin.

And numerous other projects today reflect the devotion of the countless Catholic faithful who wish to place their churches and chapels under the protection of Saint John Paul II, in every corner of the world – in a suburban satellite town of Havana, the Cuban capital, in a suburb of the Nicaraguan city of Boaco, in Belarus in the university city of Baranovichi, and in the small town of Mutoko in Zimbabwe, home to simple peasant farmers and local manual workers.

On 16 November 1981 the Pope welcomed in audience the participants of the General Assembly of ACN, who were meeting in Rome, and said to them: “In the two millennia of the history of Christian love for neighbour, you have made an efficient and moving contribution, as expressed in the name of your association, “Aid to the Church in Need”. I address myself to our beloved Father Werenfried van Straaten to express my gratitude, together with that of so many bishops, thousands of priests, religious brothers and sisters, novices, seminarians and millions of the Catholic faithful. To all of you diligent collaborators in this beautiful work of ecclesial solidarity I renew my words of encouragement and impart to you my particular apostolic blessing.”

It is a blessing that the foundation still draws on today, almost 40 years later.

If you would like to make a donation in honour of Saint John Paul ll to continue his legacy of evangelisation click the button below: