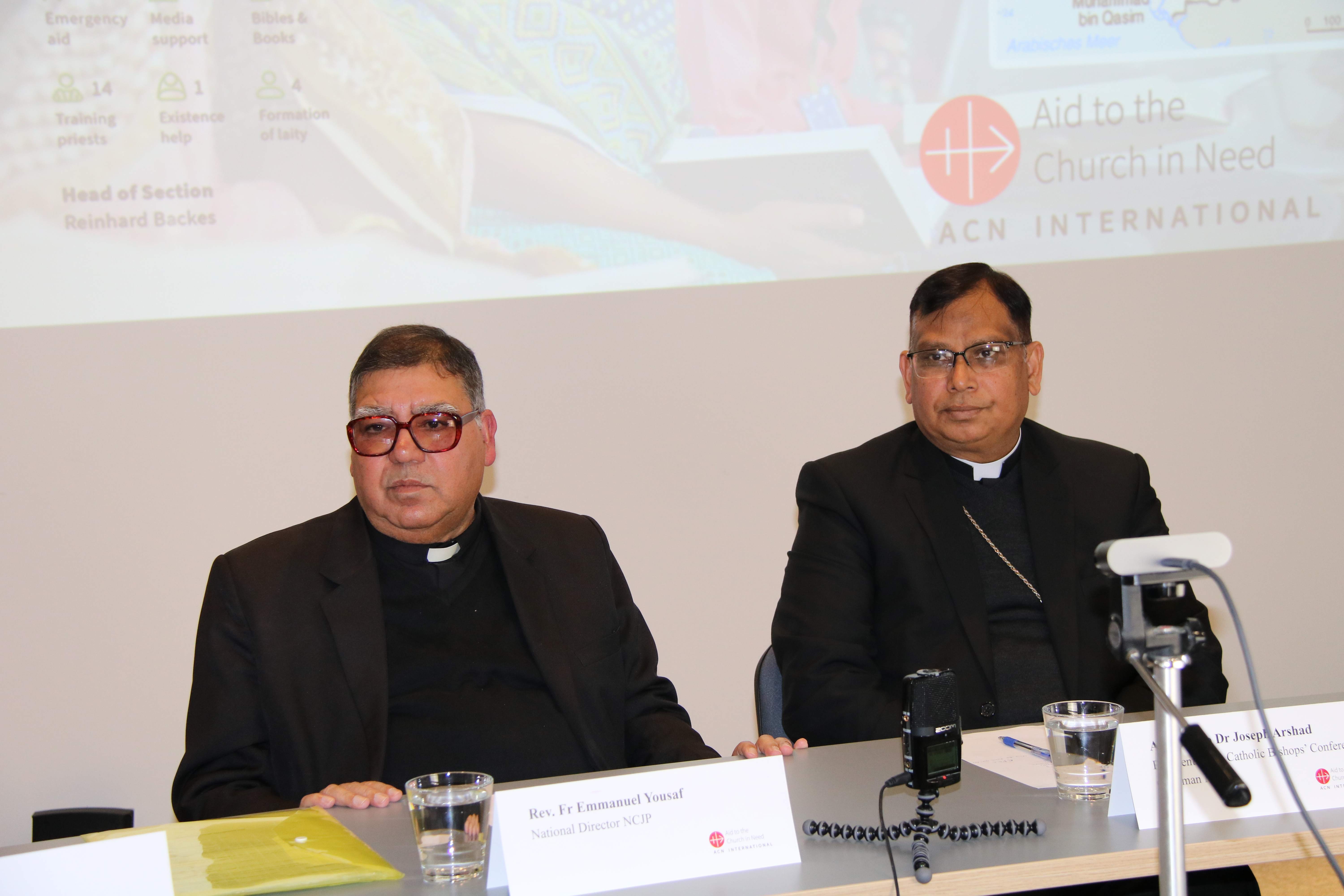 22 August: International Day Commemorating the Victims of Acts of Violence Based on Religion or Belief

Pakistan: "The lives of victims accused of blasphemy are forever threatened and many have been killed."

In 2019 the UN General Assembly proclaimed August 22 as the International Day Commemorating the Victims of Acts of Violence Based on Religion or Belief.  According to the report "Religious Freedom in the World" by the international foundation Aid to the Church in Need (ACN), published in April 2021, the situation has worsened in the last two years. The charity is greatly concerned about continuing violations, acts of violence and harassment on religious grounds in at least 26 countries around the world.

This August 22, a day to remember the victims of religiously motivated violence, the foundation wants to give a voice to the victims of blasphemy in Pakistan. In this Asian country, religious minorities suffer under three-fold pressure: the State, Islamist extremist groups, and a popular feeling of ethno-religious supremacy.  Father Emmanuel Yousaf, project partner of Aid to the Church in Need and director of the Catholic Commission for Justice and Peace (CCJP), explains the situation of the victims and the importance of international measures, such as the resolution on blasphemy laws in Pakistan by the European Union at the end of April 2021. Interview by Maria Lozano, head of the press department of ACN International.

ACN: How many cases of blasphemy accusations do you have as open cases to defend by the CCJP?

Fr. Emmanuel Yousaf: The CCJP is currently handling twelve cases of blasphemy defendants: nine in Punjab and three in Sindh.  From the total of 12 cases, 11 victims are Christian and 1 is Hindu.

These cases are not only a terrible drama for the victims but for their families. Could you explain the consequences of these false accusations? I think, in the West, we cannot imagine it...

When a person is accused falsely, it is not only limited to the victim itself, or the family but the whole locality and neighborhood gets affected. Even their houses and churches are attacked and burnt. For example, in the incident in Shanti Nagar, a Christian village in Khanewal city, the whole village was attacked as a result of one falsely accused person, Baba Raji. Similarly, seven people were burnt alive in Gojra, a town close to Faisalabad, and Joseph Colony, a village on the outskirts of Lahore city, was attacked by a large mob, setting fire to over 150 houses, including that of Sawan Masih, a falsely accused sanitation worker. There are many more cases like those mentioned above. We have witnessed them. In such cases, it is observed that a falsely accused victim even after being acquitted would not be able to return to her or his neighborhood or even her or his hometown. The lives of these victims are threatened forever, and many have been killed.

At the end of April, the European Parliament adopted a resolution on blasphemy laws in Pakistan. How important is this resolution for religious minorities in the country? Is it important as well for Christians?

This resolution holds significance in itself and is of great importance for the rights of religious minorities in Pakistan, especially the Christian community. As the data shows, blasphemy is the charge in 52% of the cases affecting religious minorities and in 14.5% of cases of Christians specifically. However, the Christian community represents only 1.27% of the population. Therefore, proportionally this number is very high.

The resolution has relevance also by virtue of other clauses [5, 6, 7, 14, 16 and 18] mentioned in the declaration, as these are directly related to religious freedom and the judicial and legislative system of Pakistani states.

The resolution noted an alarming increase in blasphemy accusations over the last year in Pakistan, online and offline. Does this fit with your experience as director of the Catholic Commission for Justice and Peace (CCJP)?

Yes, based on our experience of documented data on blasphemy cases since 1987, we have witnessed an alarming increase in blasphemy accusations in the past few years, especially following the growth in the use of social media forums such as Facebook, Twitter and WhatsApp.

What do you think are the causes of this increase?

During the pandemic we have seen an increase in these cases, taking advantage of the fact that the pandemic has caused hurdles in fact-findings and judicial investigations and the court proceedings were delayed. Another worrying concern is that while in the past most of the cases used to be in rural areas, where someone would accuse another person of blasphemy in order to settle a personal score or obtain land or property, we are now witnessing an increase in urban areas, where cases are being registered against educated sectors of society such as students, nurses, doctors and many other professional fields. This is a cause for concern as it indicates that religious radicalization is on the rise and, therefore, there is a greater determination on the part of the majority to force others to convert or subscribe to their ideology, and when they refuse to do so, they are falsely accused of blasphemy.

Pakistan's Foreign Office spokesperson Zahid Chaudhri stated in reaction to the EU resolution for Pakistan's minorities: "The discourse in the European Parliament reflects a lack of understanding in the context of blasphemy laws and associated religious sensitivities in Pakistan – and in the wider Muslim world." Which is your opinion? To what does the phrase “in the context of blasphemy laws” refer?

Pakistan, being a Muslim majority country with 96.47 % of Muslims, holds a perception amongst this mindset that these laws are not man-made but divine and so cannot be changed and even repealing them cannot be considered.

Mr. Zahid Chaudhri, Pakistan’s Foreign Office Spokesperson, is correct to some extent in that in the last decade or so society at large has become religiously radicalized and because of that, it has become nearly impossible to demand the repeal of the law. This has solidified thinking and ideology. Therefore, as an organization, CCJP has always been working on and asking the government to stop people from misusing this law and has also provided recommendations. Furthermore, CCJP does not demand repeal of the law but procedural amendments to the law. In his statement, Mr Chaudhri speaks from the context of the belief of the majority community about the Holy Book, the oneness of Allah, the finality of Prophet Muhammad (PBUH) and Islam being the superior religion above all. Over the years, due to a biased education system and curriculum, the services and social structure have strengthened the thought and ideology that there is only room for Islam in this country.

You are very engaged in the defense of the rights of minorities. According to the constitution, they enjoy the same protection as Muslims, but what is your experience in practice? Do the judicial and administrative mechanisms offer minorities the same opportunities and possibilities?

Yes, the CCJP commission has been committed to the defense of the rights of minorities since 1987. Raising our voice for the state of Pakistan to be compliant with Articles 9, 20, 25 and 36 of the Constitution of Pakistan, Article 18 (I & II) of UDHR talks about ensuring protection, religious freedom and giving equal rights to religious minorities. Although the state says that we comply with international laws, my own personal experience suggests the minorities are deprived of the rights ensured in law.

In Pakistan, the rights of religious minorities are not protected and the contradiction remains. For example, Article 41 of the constitution states that the president has to be a Muslim citizen of Pakistan. Although this concerns only one of the highest positions in the country, its influence is seen in every prestigious and strategic position in every department. As a result of which rarely would a minority member be appointed to such positions of power, be it in the judiciary, the armed forces and even, to some extent, in Pakistan's administration.

The resolution is important, but it is only a first step as it is just a recommendation to the EU member countries. What are you expecting from the international community and the EU?

Yes, the resolution is important, and we would ask the international community to engage with the government and put pressure on it to safeguard and ensure the protection of religious minorities. Furthermore, we would urge the international community to help Pakistan in promoting tolerance through education, building capacity through judicial and police training and reforms for stable economic conditions, as an economically empowered society where everyone is treated equally will have a lesser degree of such problems existing.