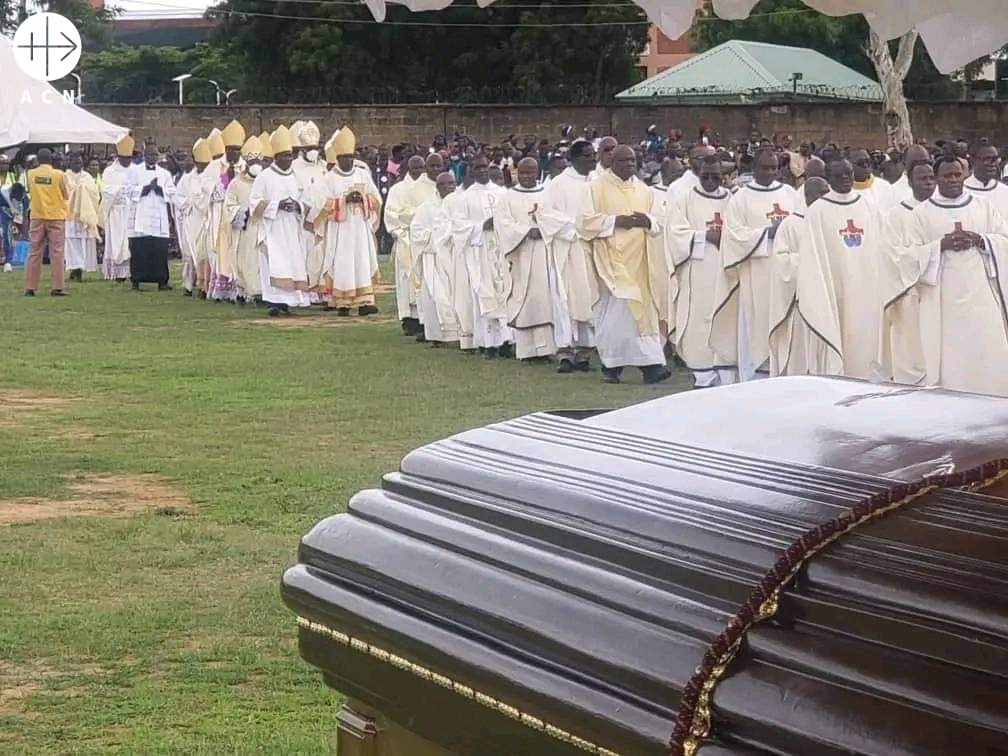 Bishop George died aged 66, of illness, on 8 July, and was buried on 4 August.

Mons. George Jonathan Dodo was the first bishop of the Diocese of Zaria, established in 2001, and he led it under very difficult circumstances for almost 20 years.

The Catholic Diocese of Zaria is situated between the dioceses of Sokoto and Kaduna, in the north of Nigeria. Christians are in a minority in this part of the country and suffered terrible violence at the hands of Boko Haram and other extremists for many years.

ACN remembers Bishop George as a modest and courageous leader. The international charity supported a total of 51 projects in his diocese and worked with Mons. Dodo since 2001 in his commitment to raise his Diocese to what it is today. Several of these projects involved building new structures, and later evolved to providing security and protection, due to the increasing threats, and to rebuild Church structures after violent outbreaks. The projects reveal the difficulties and struggles of Christians in the diocese of Zaria.

George Jonathan Dodo was a humble man. When he became bishop, he decided to live in a modest parish house on the outskirts of the city and was in no hurry to build a bishop's residence. He was also very brave. On 17 June 2012, a bomb intended for the nearby Sacred Heart Catholic Church went off near his house, killing two people and injuring 50. When the suicide bombers were prevented from entering the compound of the Catholic Church by determined young Catholics on guard duty, they reversed back down the road and detonated the explosives. The remains of the car ended up in the compound of the bishop’s house, which was damaged. Thanks to ACN benefactors, construction began on a new house in the compound of the Sacred Heart Parish, but Bishop George was unfazed and continued to work for the benefit of his flock.

Mons. Dodo suffered from ill health and had experienced much pain, but his sudden death was a surprise for all.

At the funeral Mass, held on 4 August, Bishop Julius Yakubu Kundi, the Catholic Bishop of Kafanchan diocese, said: “We were not prepared for his death. He passed on when we least expected and needed him most in the diocese. His demise created a big vacuum not only for the Church in Zaria, but also in Kaduna State where he has served as a member of the State Peace commission for so many years”.

Speaking about the terrible situation Nigeria is currently experiencing he stressed: “There has never been a period in our history as a country that we feel the total absence of leadership than now. The near-total breakdown of law and order has left everyone in this country to feel more or less like an endangered species. Church leaders are getting daily frustrated and overwhelmed with the issue of lack of security in their respective jurisdictions”.

The situation especially affects the minorities in the country. “Worse still are those of us here in the North that apart from presiding over mass funerals of our parishioners, we struggle daily to survive the hostile environment we found ourselves to evangelize," said Bishop Julius Yakubu Kundi, the Catholic Bishop of Kafanchan diocese.

Mons. George Dodo was born in Zuturung Mago, diocese of Kafanchan, on April 17, 1956. After attending the minor seminary of St. Joseph, Zaria (1973-1977), he studied philosophy and theology at the major seminary of St. Augustine, Jos. He was ordained a priest for the archdiocese of Kaduna on June 18, 1983.