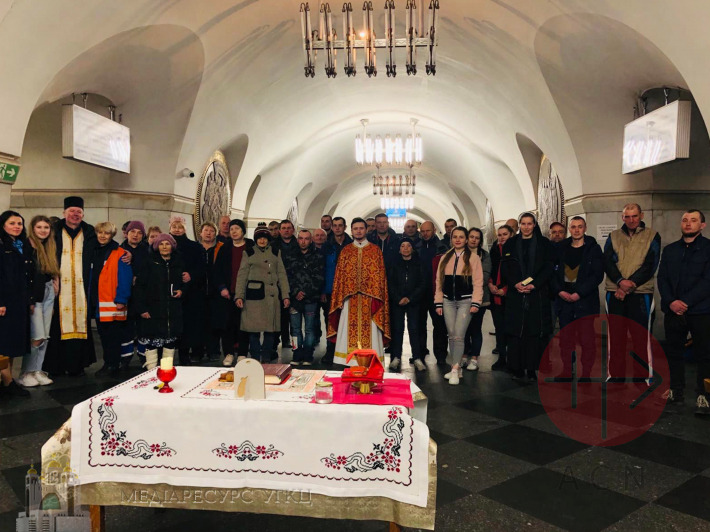 A priest in Kyiv: Mission in times of war

ACN has been sending almost a million AUD in Mass stipends to support priests in Ukraine who continue to serve a war-weary and frightened people. Almost 1,900 Catholic priests are receiving these stipends, all over the country.

One such priest is Father Andriy Bodnaruk, who ministers both to families in the capital and to soldiers at the checkpoints. He also celebrates liturgies in the shelters and organises activities to help distract the children during this war. Wearing a bulletproof vest over his cassock, he pays pastoral visits to those who have chosen to stay, either in the homes for the displaced or in their own residences, such as a 90-year-old blind lady who lives alone with her daughter. Fr. Andriy takes Communion to those who want it and, besides this spiritual nourishment, distributes aid packages to the needy, which he purchases with funds he receives from Aid to the Church in Need (ACN), as well as other organisations that are helping on the ground.

“I am doing what I did before: I serve God, the Church and our people. I remain close to the ailments that afflict people. I especially try to be close to those who are fighting the enemy, and to those who are dealing with stress and anxiety. We also coordinate the aid we receive from our project partners”, says the young Greek Catholic priest.

In his conversations with the people, Fr Andriy tries to speak of love. He says he sees this love in the residents of Kyiv. “Our people are not panicking, but they have a greater need to serve and support each other. I can see their dedication. Many of them, the ones who had better means, a nicer house, and who lived in more comfort, now often wear worn-out trousers and jackets and come out in the cold, day and night, to protect their city and their neighbours. They are selfless and committed. They know what they represent. People are united, especially around the Church. Because when the community gathers to pray in the homes for the displaced it becomes more united and people take responsibility for each other.”

Father Andriy Bodnaruk admits that he is also afraid that his emotions may have been affected by the war, but he gives thanks to God, because silence and prayer have helped him find answers to the more difficult questions.

He tries to convey to the faithful – and to the soldiers – that there is nothing sacred about anger, nothing good, and reminds them that Christ forgave those who killed him “for they know not what they do”, while Our Lady prayed in silence. The priest insists on not cursing the enemy, so as not to be drawn down to his level. The strength to fight, he says, comes from faith and trust in God.

Father Andriy is not alone in his service. Hundreds of priests in Kyiv are carrying out this social and pastoral work. In one of the underground stations in the capital, which currently doubles as an air-raid shelter, priests from the Ukrainian Greek Catholic Church regularly celebrate Mass, or, to use the appropriate term for their rite, the Divine Liturgy. One priest celebrates, while another hears confessions. During these difficult times, the pastoral work of the priests is aided by nuns, who often chant the hymns which accompany the liturgy.

The world is uniting around Ukraine, says Fr Andriy. And this unity has resulted in the aid that volunteers and the global community are sending to the occupied cities: “I sincerely thank Aid to the Church in Need for their financial support during these difficult times. I want to assure you that every cent spent in these times of war is a great contribution to world peace. The funds we receive are mainly used to pay for operational expenses, buy necessary products and medication and pay for transport. These funds are also necessary to support my family”.

As with many Eastern Rite churches, the Greek Catholics allow for the ordination of married men, and Fr Andriy has a wife and children. He explains that his family was forced to abandon Kyiv and move to western Ukraine. “Since they had to leave everything behind in Kyiv, we had to buy what they needed to start over”. Unfortunately, in these difficult conditions, money runs out fast. His savings only lasted until the end of the first month of the war, he explains. “We don’t know how long this is going to go on, and it is very unnerving, but sometimes we begin to have doubts, and panic sets in. Despite the great support we have been getting from ACN, we continue to face new challenges. I don’t have a car, for instance, and I often depend on the help of others to deliver food packages and carry out my priestly ministry”, Fr Andriy explains.

Transport is increasingly expensive because fuel prices have risen considerably and there are shortages since it is mostly reserved for the military and other urgent services. “We have to form long queues in petrol stations to get fuel to be able to visit our community, to provide them with the sacraments, and fulfill other needs.”

Fr Andriy is convinced that it is God who is saving people from evil and despair. “We used to complain a lot about being poor. Now we understand that if we wake up in the morning with two eyes, arms and legs, that is already a blessing!”, he exclaims.

This is a special time to appreciate the value of simple things. According to him, war is also a time of reconciliation. “When Christ was crucified, and in the tomb, nobody noticed anything different. But after that storm, after death, came the resurrection. That time, and that resurrection, will come”.

Featured Image: People praying in the subway and in air raid shelters. Copyright: Aid to the Church in Need.