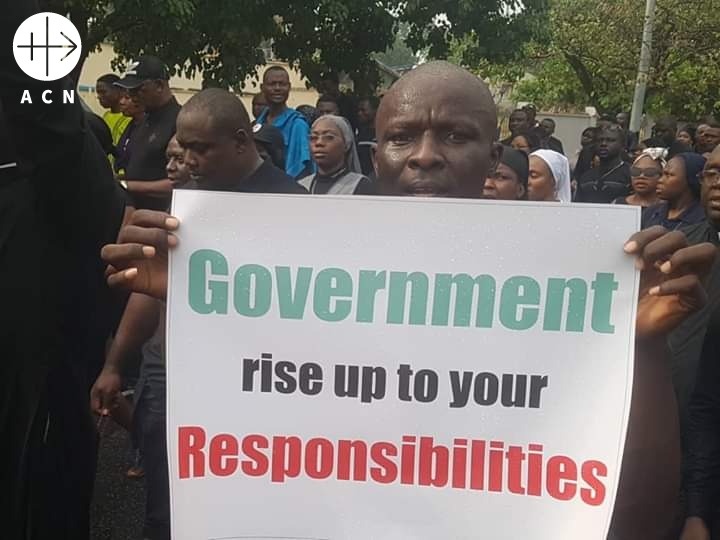 With violent actions now taking place in and around Abuja, Archbishop Ignatius Kaigama assesses the situation as very serious and accuses politicians of being distant from the people.

A string of terrorist attacks in the capital city of Nigeria has set the population on edge, and brought the country to the brink of disaster, according to the Archbishop of Abuja, Mgr Ignatius Kaigama, who spoke to the international charity Aid to the Church in Need (ACN).

Recently terrorists attacked a prison located near the international airport – freeing leading Boko Haram members – and a military checkpoint just outside the city, killing an unknown number of soldiers. “More worrying was the attack on the troops of the 7 Guards Brigade which provides security for the Presidential Villa and the Federal Capital Territory, ambushed while on patrol”, says Archbishop Kaigama.

“Abuja is the capital city, and it should be the safest place to be. This is where the President lives, we didn't think things could happen in Abuja in this manner. We are not sure what could happen next, when or from where the attackers can come, because they can do anything. The situation is very serious.”

“This is very organised; it is not something that happens by chance. Some years ago, there were bomb attacks. But there has never been a really serious threat, as we are witnessing now”, the archbishop warns.

“Next year there are elections, and people want power, they are doing everything they can”, he stresses. Popular fear and frustration are simmering, says the Catholic leader, and are compounded by the fact that politicians seem unwilling to do anything to remedy the situation. “One would have thought that as a result of the worsening security situation, senators, and representatives at the National Assembly would be feverishly seeking solutions to the problems, but instead they gave themselves six weeks break. After the attacks they left, just last week!” Archbishop Kaigama explains.

Even when they are present, though, the archbishop complains that politicians are hardly accessible. “They receive their salaries, their privileges, but they are less concerned about the overall welfare of the people. Since I arrived in Abuja as archbishop, I have been to nearly every village, but when I mention the names, the politicians or political leaders don't seem to know them. And you would imagine that they would come and ask you what you found out, where did you go, what did you see? But no. They are not available. They say they are busy. People are suffering, but the leaders simply care more about their personal welfare and official privileges. I am hoping this next election will be free, fair and transparent, and will produce leaders who are selfless, people-oriented and capable of genuine dialogue”, the archbishop tells ACN.

Asked by ACN about the situation of Christians in the country and the allegations that persecution is increasing, Archbishop Kaigama answers with caution.  “We cannot generalise by simply saying that Christians are persecuted because in the governing party there are Christians. But persecution is not just about killing people with knives, it is about manipulating things in favour of one group”.

“There is subtle persecution, which is even more dangerous. It is done in such a way that you cannot say they are really killing Christians, they have not pushed the Christians away, but the way the Government carries on you can be sure the Christians are not favoured. There is no equity. We are a country that is more or less 50-50, so there should be equal distribution of resources, of opportunities, and people should feel included in sensitive political, economic or security positions.”

One clear example is the recent decision of the ruling party to defy convention and choose a Muslim-Muslim ticket for the Presidential elections next year.  Archbishop Kaigama reacts in disbelief: “In the whole of the north, they could not find a Christian who is qualified to be Vice-President?”

Although the archbishop is sceptical that the ruling party will allow the 2023 vote to be fair, the Church has been encouraging everyone to register and to try and change the country through the ballot box. The worst that can happen, he adds, is for the ruling party to use the violence and instability as an excuse to postpone the elections indefinitely.

“It is important that the elections take place. We are waiting for the elections, and we hope they will be credible, because in the past they have manipulated them, but they have assured us that the votes will count, and that is why even in churches we are telling people to register to vote. I have done so and I have asked everyone to do so, and I think the young people are eager. They are so angry with what is going on, and they really want a change.”

In such a situation the optimism that characterises Nigerians is tested but does not die. “Nigerians are very optimistic, we always believe that tomorrow will be better and that whatever happens, nothing will scatter the nation. We suffer, but we smile at the same time. We are suffering and smiling, otherwise, life is terrible.”