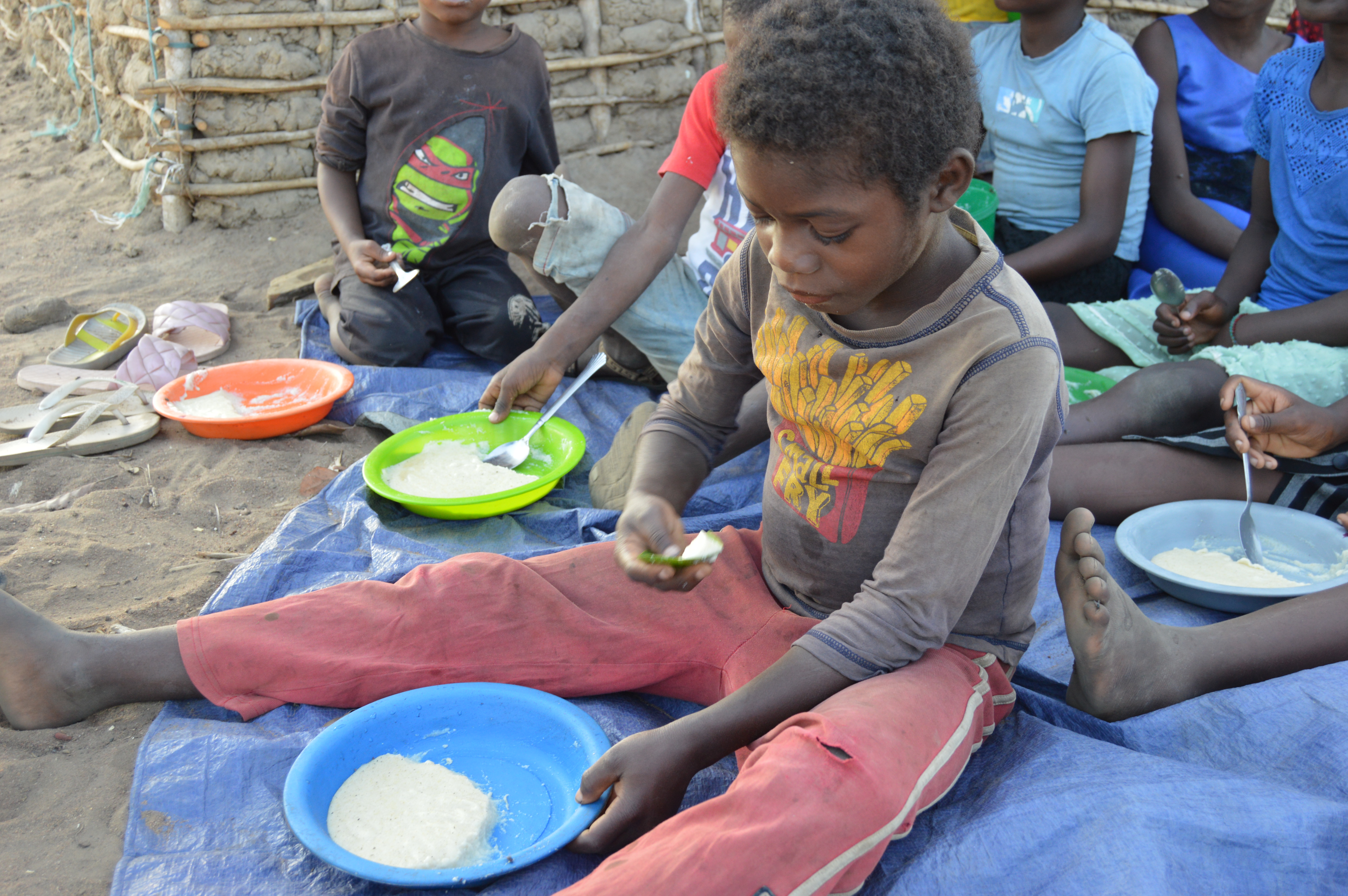 In the parish of Itoculo, in the diocese of Nacala, a reception process is in place for displaced people from Cabo Delgado, victims of the terrorism that has plagued this northern region of Mozambique since October 2017, bringing horror with more than 3,000 dead and 850,000 people displaced across the country.

Nearly 22,000 of these IDPs, mainly women and children, have sought refuge in Nacala, even though the diocese is more than 400 kilometres away. The parish of Itoculo welcomed more than a hundred people, 117 to be precise, almost half of them children. They are at the centre of an initiative backed by the pontifical foundation Aid to the Church in Need (ACN) to provide psychosocial support to enable them to face with greater resilience the challenges they face as victims of war.

In the middle of the ground, sheltered from the relentless African sun by the shade of some trees, a group of children probably have their only meal of the day: gruel.

Zeca Virgilio and Amon Ali are two Caritas monitors who coordinate the ACN project. They wear a blue T-shirt with the symbols of both organisations. Virgilio says that he helps children “pray, take care of their hygiene, wash their hands...”. He adds that he really likes his job "because he's helping people.” Amon is also happy to help displaced people get their life back even if it is on the roadside, which is where they work.

Every day, next to the houses, they “invent” a classroom and a cafeteria with heaven as their roof and the ground and grass as their floor. For food, the children have gruel, a real "shot" of vitamins mixed with corn, milk, eggshell, and anything else they can put together. Hunger is a cruel reality.

In a message dated March 2021, the Bishop of Nacala, Monsignor Alberto Vera, underlined the need to help IDPs. “Unfortunately, this is a time of widespread famine due to low farm output in 2020 and the lack of rainfall in 2021," the bishop explained. The reality is such, he added, that 85% of the population has been left “in a situation of extreme vulnerability,” which has increased “social pressure even more.”

Times are hard, but the response of the local Church is a sign of hope. Providing psychosocial support to displaced families in the parish of Itoculo is a good example. In addition to Caritas and the ACN, Father Mário João, a Portuguese priest on mission in Mozambique, is also involved in the project.

Given his height and long blond hair, Father Mario isn’t inconspicuous. He met with ACN in Mweravale, one of the communities which welcomed displaced people from Cabo Delgado. “They arrived here in March 2020. In September, we started this project focusing on three aspects: for the little ones we have “children’s friends” and games, aimed at helping them overcome a little bit of what they experienced in Cabo Delgado. For seniors, we have vocational training in the Macua language and mathematics, plus what we call ‘active listening’, which is a space to share the stories, good and less good, they lived through. The goal is to help them overcome the difficulties caused by the war in Cabo Delgado.”

Father Mário knows very well the story of these displaced people. “They left before things got really messy. When they realised that the terrorists were approaching the villages, they fled and came here because they had relatives who had been in this area for a while. Thus, relatives, neighbours, and friends came and settled here.”

This project by Caritas Nacala, funded by ACN donors, helps 117 displaced people from Cabo Delgado with seven local partners supported by three missionaries. In Itoculo, you can now hear the cheerful voices of children, especially at lunchtime. For these displaced people, the present is a time of great uncertainty. Many want to go back to their villages of origin and instead are left waiting. We just have to keep up with the news of what is happening up north. If the attacks end, it will be time to go home, but everything suggests that peace is still far away.

In the meantime, in the Diocese of Nacala, near the roadside, you can see a group of people, IPDs, who need help. “It's a challenge, but it’s good to see the change in the children who are now playing more, running more, jumping more, and even learning Portuguese,” Fr Mário said.