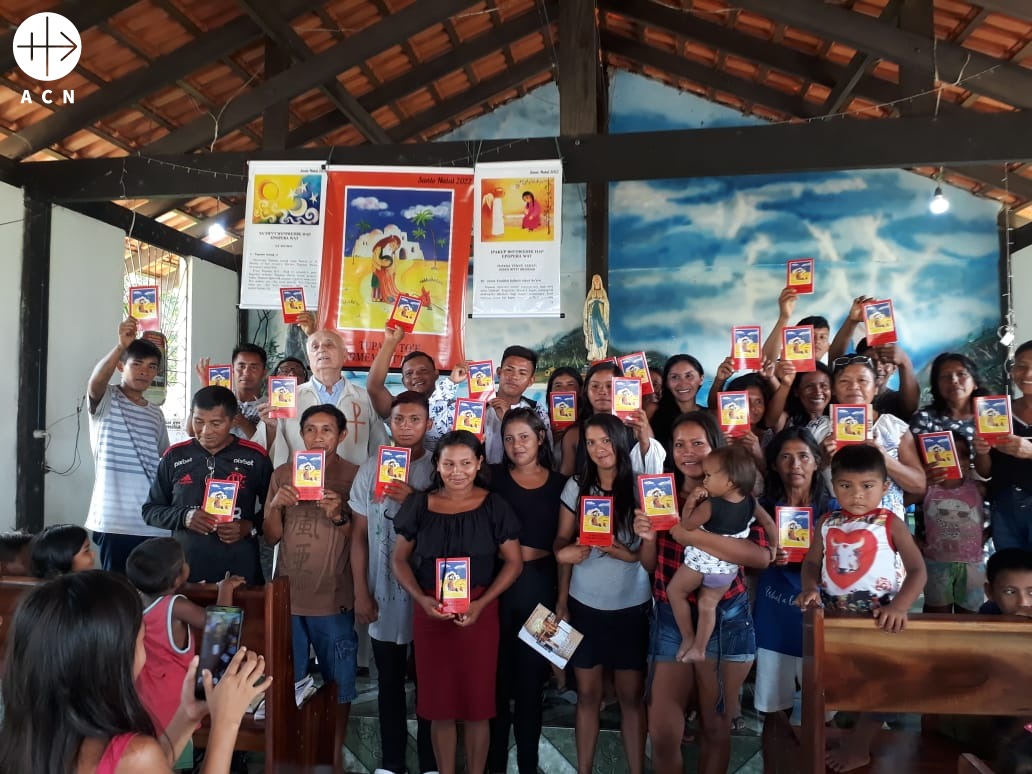 The new Sateré language edition of ACN’s Child Bible is more than an instrument for deepening the faith, it also helps preserve the indigenous people’s language and culture.

Members of the Amazonian Sateré-Mawé community can now read the Bible in their own language, after pontifical charity Aid to the Church in Need (ACN) completed a new edition of the “Child’s Bible – God Speaks to his children” and distributed it to several communities.

The Sateré-Mawé people live in the Andirá and Marau regions of the Amazon. In mid-December, thanks to ACN, over 1,000 copies of the Child’s Bible were distributed to representatives of close to 30 communities.

Father Henrique Uggé, an Italian missionary with the Pontifical Institute for Foreign Missions (PIME), has spent decades working with the native people of the Amazon and explains that “we all like to hear, read, and meditate on the Word of God in our own language, in our own cultural and historical context”, adding that the Sateré-Mawé will now be able to hear the readings at Mass in their indigenous tongue as well. “This will be most useful for them”.

Father Henrique recalls that when he arrived in the region, in 1972, the indigenous community was reduced to about 1,200 people, and in danger of extinction due to disease and total neglect by the civil authorities. Now they number more than 12,000 and children benefit from a network of bilingual schools.

The new edition of the Child’s Bible, which includes key stories from the Old and New Testaments, was funded and distributed by ACN, and is based on the efforts of seven local catechists who translated it, such as Dercival Santos Batista, himself a member of the Sateré-Mawé. “Through this book our children, and our youth, will be able to walk along the right path. It is also very important for our own understanding of the Word of God”.

Another translator, Honorato Lopes Trindade, explains that publications such as these have the added benefit of helping to preserve the local culture. “We are losing our language, and we should fight to maintain it. Many of the words in this Bible have fallen out of use and will require research by readers.”

Father Henrique Uggé highlights the importance of this contribution to the preservation of the indigenous culture and explains that editions of other spiritual and liturgical books, including audiobooks, are being prepared.

The Child’s Bible was first published by ACN in 1979. Since then, it has been translated into 190 languages. Over 50 million copies of the book have been printed, including over 10 million in Brazil alone. Besides the Sateré-mawé and the standard Portuguese versions, the Child Bible has been translated into other indigenous Brazilian languages such as Guarani, Tukano, Ticuna and Macuxi. In some cases, the Child’s Bible was even the first book ever to be published in that specific language.