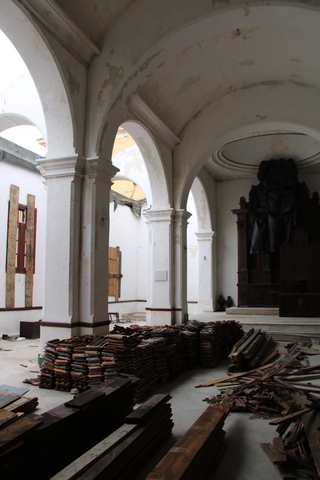 Barring a miracle, we’re going to have to abandon Cuba

The Friars of the Order of Our Lady of Mercy (mercedarios /Mercedarians) in the parish of Jesús del Monte, in Havana, are struggling with poverty and the aftermath of last year’s hurricane. The night of 27 January 2019 is one that Fray Gabriel Avila Luna will not easily forget; for there were times when he thought it might have been his last. Winds of over 300 km an hour tore through parts of the Cuban capital, Havana. For around 16 minutes, the friars living in the parish of Jesús del Monte hovered between life and death, it seemed. The hurricane tore through a swathe of territory some 20 km long and half a kilometre wide, and took with it the lives of four people that night.

Even for the people of Havana, who are accustomed to the threat of hurricanes, that night was a traumatic one, given the suddenness of its arrival and its sheer violence, worse than anything seen before in the 500 years the city has just recently celebrated. “At present we are five brothers, but at the time there were just three of us, since the others had not yet arrived in the mission. That night it was just me and Brother Rodolfo, since the other friar was not at home. I think it was providential that he wasn’t there, especially since his room was the most extensively damaged,” explains Brother Gabriel. “It sounded like a military bombardment, there were sounds like gunshots going off and we really thought we were going to die,” recalls Brother Rodolfo Rojas, as he shows some of the destruction to visiting representatives from the international Catholic pastoral charity and pontifical foundation ACN International. “There are still bits of roof tile from the neighbouring houses, embedded in the walls of our church and monastery. The fear that something like this might happen again is now something that has entered the very bones of many of our neighbours.” And indeed the friars themselves, who have been living on the heights of Jesús del Monte since 2014, continue to fear the danger, especially now that the new hurricane season is beginning again in the Caribbean.

As the name suggests, the ancient and historic parish of Jesús del Monte is built on a hill of the same name – a symbolic place in the history of Havana, since it has witnessed popular uprisings and the heroic defence of the city in the face of foreign invasions. “Under the care of the Mercedarians, it was the first church to be built outside the walls of the Old City of Havana and among its archives it has baptismal registers dating back to 1689. For the people of this quarter, known as the ‘Consejo popular of the 10th of October,’ it is a symbolic place where people meet for various cultural activities and where children come to play, and everything here revolves around the church,” explains Fray Rodolfo to ACN International.

But for some time to come this will no longer be possible, since the hurricane vented its fury on the church especially. “The wooden roof, dating from colonial times, and the rubble stone walls were irreparably damaged and almost all the benches, statues and other furnishings inside the church were either destroyed or swept away by the force of the wind, which tore open the large door of the main front entrance. The iron cross that surmounted the belltower was simply ripped from its moorings and fell down like a projectile on the roof above the choir, leaving a huge gaping hole,” explains Eduardo Andrés, the man charged with the reconstruction plans, for which ACN is providing assistance in the coming months. This repair work is extremely urgent because, as Fray Gabriel explains, “Up till now the church and the parish house have been left in a dreadful state and are deteriorating still further by the day – and in addition we have to gather the people together outside the church on Sundays – and when the rainy season comes this won’t be possible.” They are extremely grateful to ACN for having promised, along with other organisations, to help restore this historic church and national treasure. 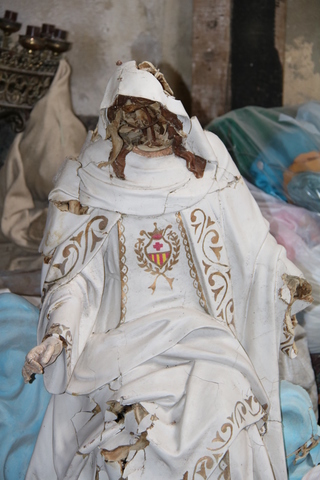 But this young 29-year-old Mexican friar still has sleepless nights – not for fear of a new hurricane, but because as superior of his community in Cuba he cannot see how to resolve the other problems facing them. The house the brothers live in had its doors and windows smashed, and in places the floor still gets flooded during the rainy season, when the water comes seeping in everywhere. “It’s not so much for our sakes, but for the three seminarians whom we have, young men who would like to join our community but who are forced to remain at home because of the dilapidated state of our monastery,” says Brother Gabriel sadly. “We arrived back on the island in 2012, after 125 years away from Cuba. Fray Rodolfo was one of the first to make his profession since we arrived here. We live by God’s providence – for our food, medication, personal expenses… In everything we rely on the generosity of our people. ACN has helped us with Mass intentions; we were desperate and it was like a precious drop of water, for which we are most grateful; but things are very bad right now in Cuba…” His voice reveals a sense of helplessness and sadness. Which is quite understandable, since Brother Gabriel is fearful of the consequences should the situation not improve: “Our presence on the island is at stake, for if we can’t make ends meet we will have to emigrate to Mexico, since we cannot maintain the mission here. Barring a miracle, we are going to have to abandon Cuba. It would be a great tragedy, because I believe that our charism of redemption, our presence here, is vital to the people of the area. It would be so sad to have to leave again, but I really don’t know how to avoid having to close down this great mission.”