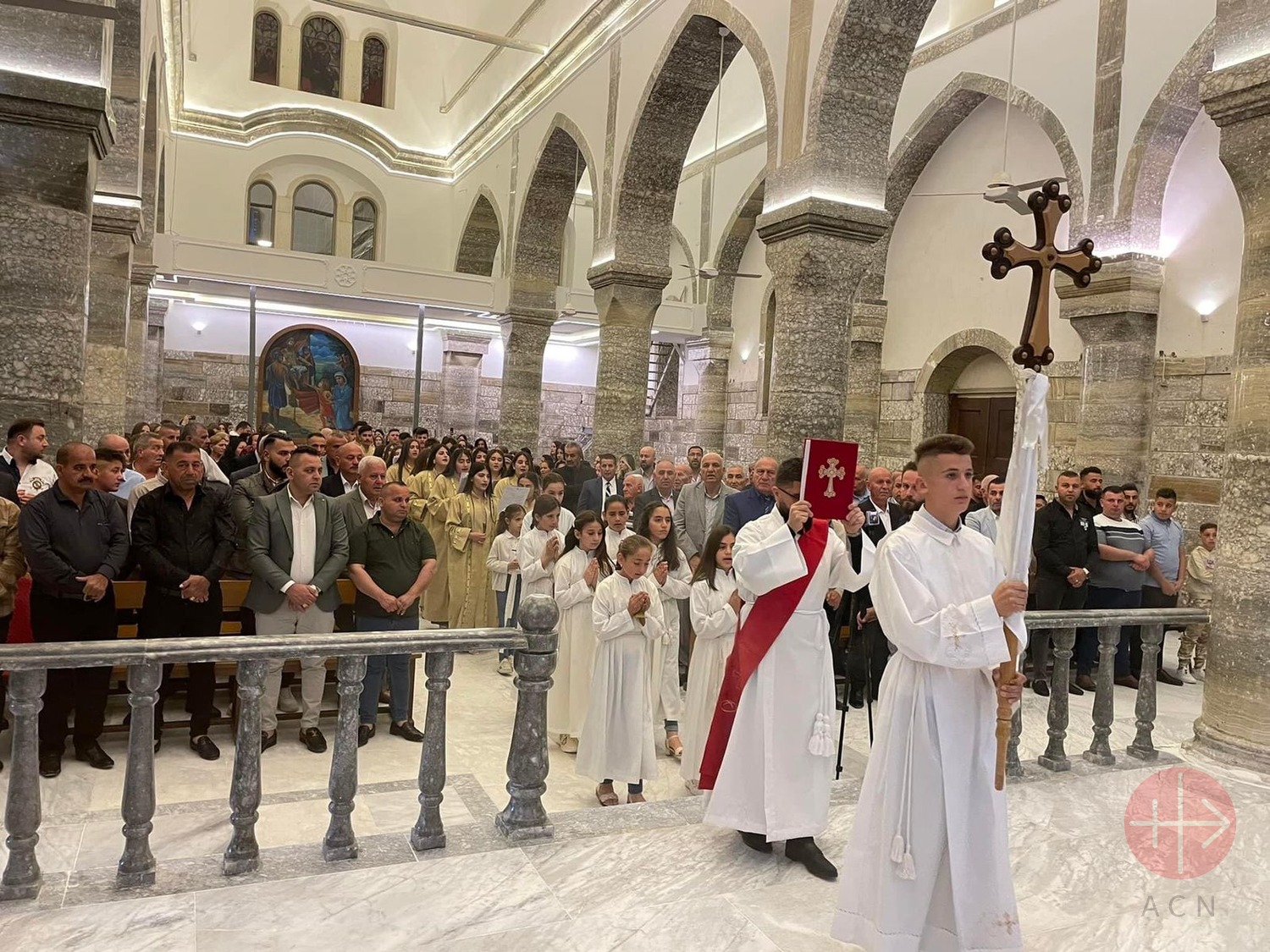 One Christian community in Iraq had added cause for rejoicing this Easter when their church opened for services for the first time since the building was desecrated by Daesh (ISIS) militants nearly eight years ago.

Gunmen used the sacred images above the altar for target practice and the extremists wrote anti-Christian graffiti on the walls of the nearby Chapel of the Immaculate Conception.

The slogans, some in German, read: “O, you [expletive] slaves of the Cross, we will kill you all… You dirty people, you do not belong here.”

Even the gravestones of the nearby cemetery were broken into pieces.

By the time Daesh had been defeated and the town was declared free from violence, Batnaya had been almost razed to the ground, becoming the worst damaged of the dozen or more Christian towns and villages in the historic Nineveh Plains.

The Catholic charity Aid to the Church in Need (ACN) undertook a massive restoration and rebuilding programme as part of an initiative to help the people of Batnaya to return en masse.

ACN, which supports persecuted and other suffering Christians, has helped towards repairs to two kindergartens in Batnaya, as well as St Clara’s Dominican convent, parish hall, library and priest’s house (presbytery).

Receiving funding of $360,000 AUD, St Kyriakos’s Church and the nearby chapel formed the centerpiece of the ACN restoration scheme and, when an ACN project assessment team visited Batnaya last month, they saw the work was nearing completion.

The work was put on pause for Holy Week to allow the services to take place, the first since August 2014, and Mass attendance peaked at more than 500 for Saturday’s Easter Vigil, celebrating Jesus Christ’s resurrection from the dead.

Reporting to ACN from Batnaya, parish deacon Basim told ACN: “We were all so happy to come to the church for the Easter services.”

Rev Basim, who has two daughters, Therese, 11, and eight-year-old Veronica, and who teaches English at a local secondary school, added: “We had worked so hard to get to this stage and the place was so full there were people in the aisles.”

Noting that St Kyriakos’s Church is one of the largest churches in the diocese, Coadjutor Bishop Thabet Al Mekko of Alqosh told ACN: “We are all so grateful to Aid to the Church in Need for all the support you have provided.”

Rev Basim said he hoped the work on St Kyriakos would be complete in July, the anniversary of the church, which dates back many centuries but was renewed in 1944.

Iraq remains a priority country for ACN. The charity’s projects are geared towards safeguarding the presence of the country’s Christians – numbers have been decimated, down from more than one million 20 years ago to barely 150,000 today.