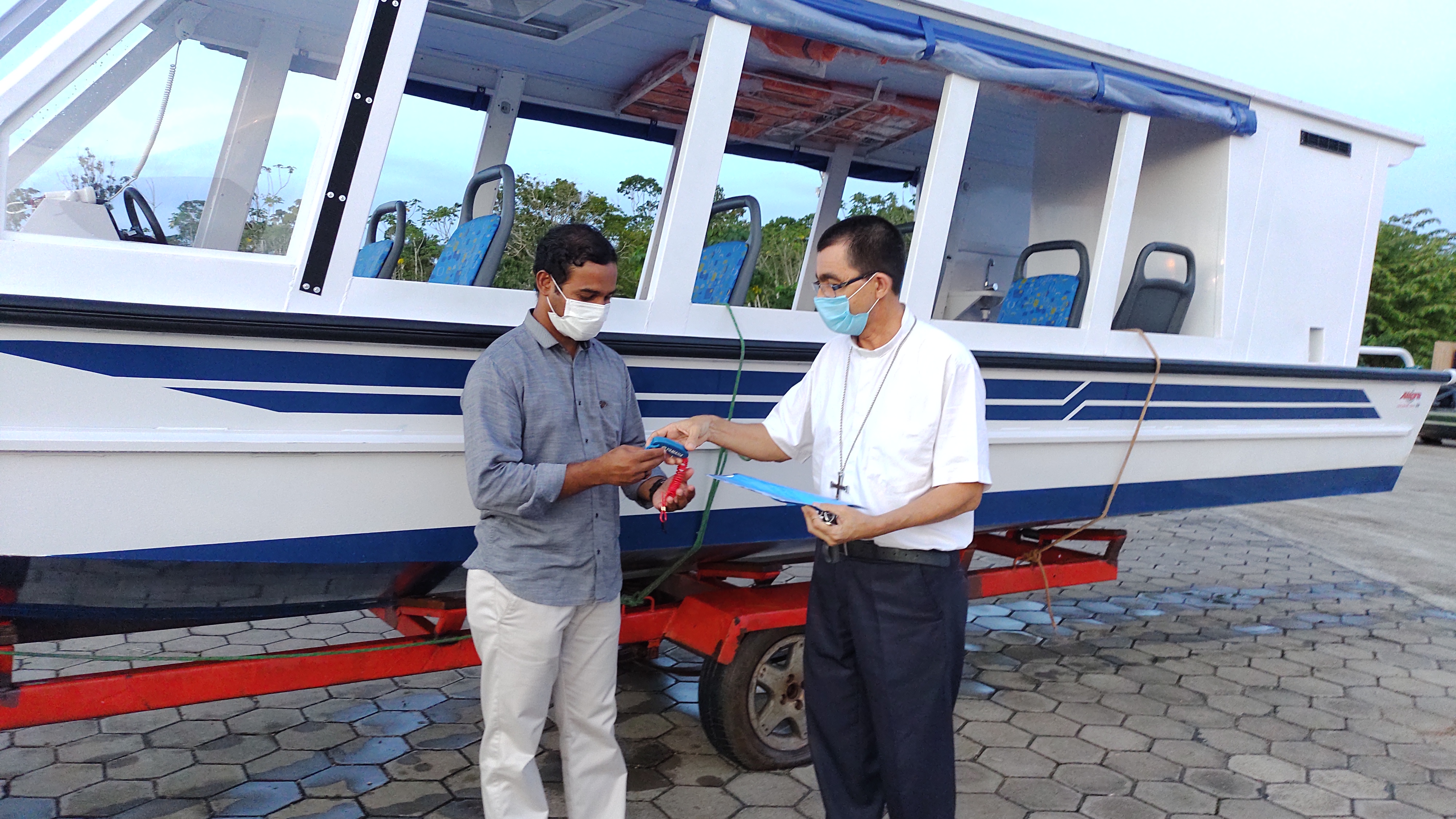 Brazil – a boat to bring Christ to the local people

From 5 to 12 September this year the International Eucharistic Congress in Budapest, Hungary will bring together Catholics from all over the world to deepen their faith in the importance of the Eucharist and reflect on the mission of the Church to make God’s love present in the world of today.

In Brazil, a community of indigenous people living on the banks of the River Amazon is also well aware of the importance of the Eucharist, for in their isolation they suffer from thirst, thirst for the Eucharist and thirst for the presence of a priest among them.

Situated in Brazil, on the shores of the Amazon River, some 270 km from the city of Manaus, the prelature of Itacoatiara covers an area of some 59,000 km² – almost twice the size of Belgium – but has a population of just 200,000 souls.

Earlier in this year of 2021 – as if the pandemic were not enough – the region suffered massive flooding of a kind never recorded before in the Amazon region, plunging the six municipalities within the prelature into a state of emergency and forcing a large proportion of the urban population to abandon their homes. In the city of Itacoatiara alone, the seat of the prelature, no fewer than 1400 families were directly affected by the flooding, which damaged homes and businesses and produced many other unforeseen consequences – for example a massive increase of harmful pests such as snakes and scorpions – leading to over 100 cases of attacks in the city of Itacoatiara itself in the first six months alone.

However, almost half the population of the area today still live in more than 200 different riverside settlements, and for the sixteen priests of the prelature, it is a massive struggle to be able to reach them all. This was certainly the situation for Father Bruno Nirmal, whose mission outreach was further hampered by the fact that his parish of Christ the King did not even have a riverboat of its own. So his visits, which can take up to 10 hours, “were restricted to the times when we had sufficient funds to hire a boat so as to be able to make the visits,” he writes.

Fortunately, and thanks to the generosity of our kind benefactors, Aid to the Church in Need (ACN International) has been able to help, in response to the appeal from Bishop José Ionilton of Itacoatiara, and has provided the funds to enable them to purchase an aluminium boat for the parish of Christ the King.

Father Bruno’s first trip in the boat, at the end of July “was marvellous,” he tells us. “This boat helps us to get to the riverside communities much more quickly, thereby enabling us to make more visits. We have already been to three separate communities, visiting people in their homes, training local lay leaders, celebrating Holy Mass and administering Baptisms,” he adds.

“The people’s faith is very strong; they thirst for the Mass, for the Eucharist, for God. When the priest arrives, they drop everything and dedicate the whole day to participating in the Mass, praying the Rosary and following the catechetical formation sessions, joining in with all their hearts.”

Father Bruno does not hide his gratitude. “On behalf of the whole parish, I want to express my thanks to the benefactors of ACN for their generosity. Only together can we build the Kingdom of God. I am quite sure that God’s reward will be very great. And I assure you of my prayers.”

Bishop Ionilton is also most grateful. “I pray to Christ, the King of the Universe, that he may pour many blessings upon the benefactors of ACN and that they may continue helping the Church in Amazonia, which is in such great need.”

ACN receives many appeals for help from the Church in the Amazon region. This is mission territory, which depends on the dedication of the missionaries on the ground – but at the same time on the generosity of all those who help them from afar, including the benefactors of ACN.

Featured Image: Bishop Jose Ionilton Lisboa de Oliveira handing over the keys to the new boat. Copyright: Aid to the Church in Need.