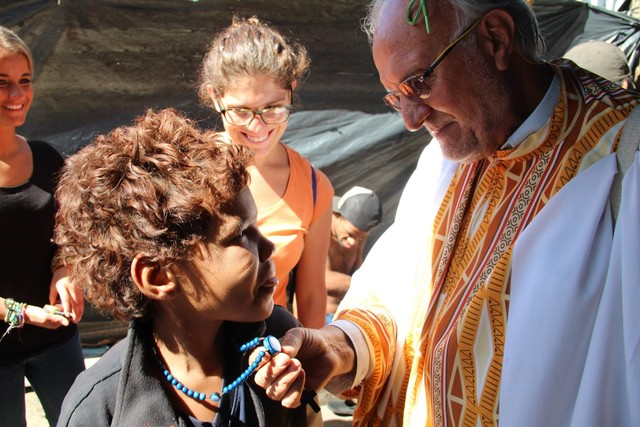 BRAZIL: “Your donations are saving lives”

"Without you, we could do nothing. You are the arms of God’s providence, who loves them through us. You make a material donation, and God gives you the joy of knowing that you are useful, today and in the future. And He will grant you Paradise.”

These words, addressed to ACN’s benefactors, come from Father Renato Chiera, an Italian priest who has spent 42 years in Brazil, dedicating his life to rescuing children and young people from the streets. Thanks to the benefactors of our international Catholic pastoral charity and pontifical foundation, the Saint Michael the Archangel’s Children’s Home (Casa do Menor São Miguel Arcanjo), in Nova Iguaçu, Río de Janeiro, finally has a chapel of its own for the young people there, who will now for the first time be able to encounter God in this place of prayer. ACN is already supporting the Casa do Menor with spiritual and religious literature, such as the ACN Child’s Bible, for example, and with improvements in its basic infrastructure.

The work being done by Father Renato and his team is quite simply transformational. Thanks to this work, children who until now had known nothing but violence and hatred are beginning to discover the seed of love within their hearts. “Only in God do they find the bosom of maternal love, which loves them in the way that they need to be loved," Father Renato explains.

The story of the Casa do Menor goes back to 1978, when Father Renato first arrived in Brazil and began to explore some of the poorest and most deprived areas of the capital Rio de Janeiro. There he found himself confronted by an atmosphere of latent violence, even among the children, sucking them into the world of drugs and drug dealing. In one single month, in fact, 36 young people were murdered within his parish. Father Renato realised that this was due to the fact that the children had never known “the most important experience a human being can know, that of being a child of God. Where there is no positive experience of this love, a child simply cannot grow up in a harmonious manner and instead suffers profound forms of deprivation which he tries unsuccessfully to compensate through drugs and other distractions. These children, who have never been allowed to be loved as “sons or daughters,” need first of all to be able to live the experience of being loved before they themselves can begin to love.”

Father Renato was already profoundly troubled by everything he saw there when, in 1982, a cry for help reached his presbytery. “The first cry for help that reached us was from young Pirata, a young orphaned boy who was living on the streets almost like a dog, taking drugs in an effort to kill the hunger in his heart,” he recalls. The boy told Father Renato, “Father, I don’t want to die. They’ve shot me; they’re going to kill me.” The blood was gushing from his neck. I took him in, and as soon as he began to feel loved, he no longer wanted to take drugs or rob people. He started to learn about the faith and began to work.” Tragically, this boy was murdered one day by a death squad. It was then that Father Renato began to think that he must create something new for these youngsters. That’s when the idea came to him of the Saint Michael the Archangel boys’ home.

“I began to take in these boys, first of all in my own presbytery, then on the verandah and then in the garage. It was okay for my little car to spend the night on the road and “sleep” outside, but not for Jesus, who was living in those boys. So that’s how my story began.”

As of today, over 100,000 children and young people have passed through the doors of the Casa del Menor, which welcomes them as members of the family, helps them to continue their studies and enables them to spend some time with God, thereby helping towards their reintegration into society. “We are not simply a refuge, we are a home, a family! Today these youngsters have ‘fathers’ and ‘mothers’, thanks to whom they can live the experience of being beloved sons and daughters.”

Father Renato believes that violence is the fruit of a lack of love. “The greatest violence is not a matter of being poor but of not being a son or daughter. The violence is a cry for help. These youngsters are frequently both the fruit of and a mirror to our loveless, cruel and exclusive society. The Casa do Menor is pointing towards a path that costs less than killing. Loving them and training them to love in their turn is our way of evangelising. It is evangelization that heals.”

Father Renato is most grateful to the benefactors of ACN for enabling him to continue offering a decent home to these youngsters and now also build a chapel for the Casa do Menor. “We thank ACN for the important help they’ve given us, both for the infrastructure and for their spiritual formation and growth. I would like the benefactors to be able to rejoice with us at the miracles of transformation and the rescuing of these lives, which were once under a death sentence. Dear benefactors, your donations are saving the lives of babies, children, adolescents and now also young people and adults, who were living in a state of abandonment, without hope and without the basic means of living. The thousands of children and young people whom we have rescued in the course of 34 years are the fruit of the little and large gestures of love by unknown and generous individuals such as yourselves. Without you, we could do nothing. You are the arms of God’s providence, who loves them through us. You make a material donation, and God gives you the joy of knowing that you are useful, today and in the future. And He will grant you Paradise.”

Featured Image: Fr Renato Chiera dedicating his life to the recovery of children living on the street. Copyright: Aid to the Church in Need.