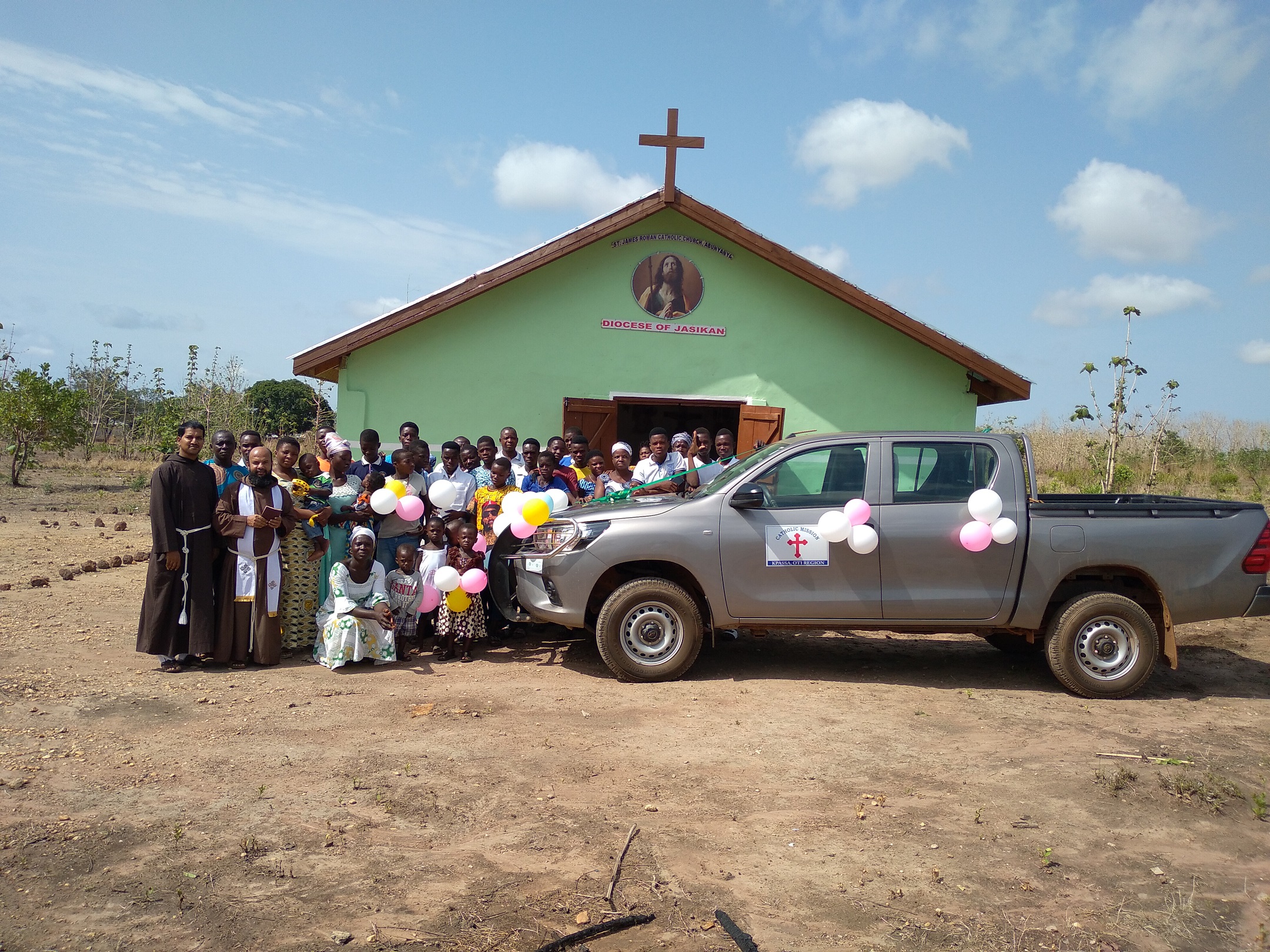 Mission accomplished – a pickup truck for the Capuchin missionaries in Kpassa.

Since 2005 a group of Franciscan Capuchin friars from Kerala in India have been working as missionaries in Ghana in West Africa. At present they have four communities here, with their main centre in Kpassa, in the diocese of Jasikan. There are three friars living in this community, ministering to the pastoral needs of the people of Kpassa and its surrounding area. The Capuchins have been working here since 2008. In 2010, however, the church of Saint Michael was raised to the status of a parish church and entrusted to their care, along with the surrounding parish. Kpassa is around 250 miles (400 km) from Ghana’s capital city, Accra. At present the parish of Saint Michael includes 17 outlying communities, or outstations, as they are called. Father Robinson Melkis, OFM Cap, is the parish priest of Saint Michael’s where he lives and serves the local community along with his two brother Capuchin priests. But for a long time their work had been hampered by the lack of a suitable vehicle. What they needed was a sturdy four-wheel-drive vehicle, something like a pickup truck, if possible with a double cabin, so that they could serve the many outstations, celebrating Holy Mass and encouraging other spiritual activities.

Many of these outstations are remote from the parish centre with difficult access. Each outstation has one or two catechists to help them in their work, but the priests still need to visit in order to celebrate Holy Mass and administer the sacraments and perform other spiritual tasks, which are “necessary in order to keep alive the flame of the Christian faith in the hearts of the faithful”, says Father Robinson.

Some of the outstations are as much as 45 km from the parish centre and “all the roads leading to them are simply dirt tracks, so that access is extremely difficult in the rainy season, especially on the motorcycle,” he explains.

They had one old vehicle, over 11 years old, and one motorcycle between the three of them, so it was impossible to travel to all the various outstations at the same time. And besides, as Father Robinson wrote to ACN, “there are still many villages in the Kpassa district where Christianity has not yet arrived. So we are asking your help for a vehicle that will enable us to reach more people with the message of Christ.”

In addition to visiting the 17 outstations the Capuchins have another clear objective: “In our evangelising work we are attempting to reach at least one new village each year. In fact there are already four more villages that we have now evangelised, although we have not yet formally established an outstation in them.”

And besides, for Father Robinson it is also important for the Capuchins to be present in other areas of society. “Although our principal objective is to provide spiritual care for the community where we serve, our friars are also involved in social and development work. Our goal is to create an awareness among the people of the social problems and encourage them to become involved in seeking their own solutions. The village people are extremely poor. There are two main areas of focus: the provision of a decent education for the children and at the same time the provision of clean drinking water by drilling boreholes in the various villages.”

So now the shiny new pick up has arrived… Car dealers around the world would be delighted to see their vehicles given such an ecstatic welcome. Brightly coloured balloons and a youthful and joyful community crowding round to welcome it. “We travelled to a remote outstation by the name of Abunyanya to celebrate Sunday Mass, and we blessed the new vehicle in the presence of the whole community. We told them about the aid we had received from ACN and other organisations. So now the people of Abunyanya, and all the other outstations, join together with the Capuchin brothers to thank you with all our hearts for your generous contribution. And thank you to all your kind benefactors, who have each contributed their individual ‘widow’s mite’ in order to help us!”

Featured Image: Vehicle for the out reach Ministry of the Franciscan Capuchins in St. Michael's Parish, Kpassa in Ghana. Copyright: Aid to the Church in Need.