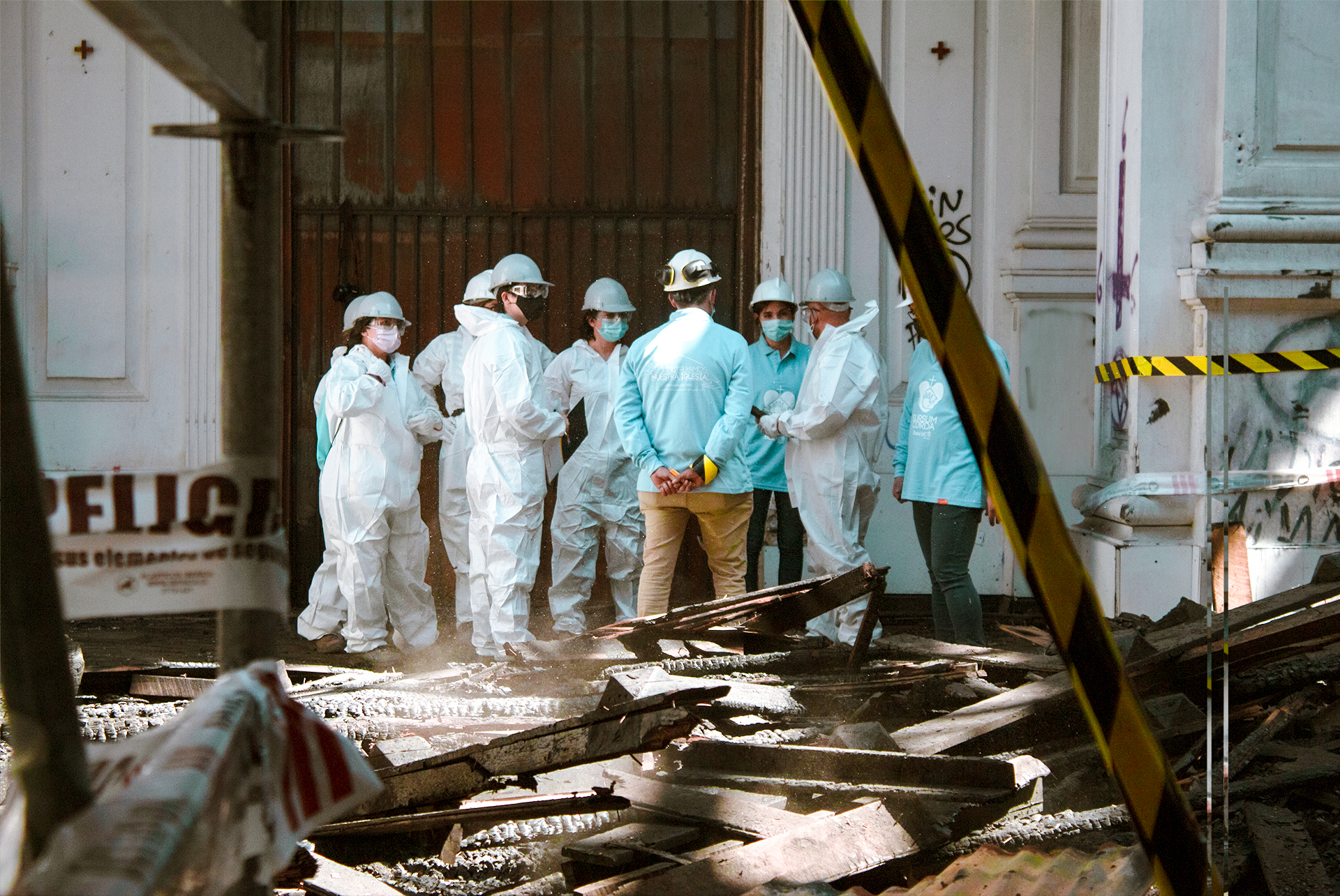 Chile: How young people are helping to rebuild a vandalised church

The Church of the Assumption in the Chilean capital Santiago was one of the churches that was vandalised and burned during the protests of 18 October 2020.

According to the report on Religious Freedom Worldwide, published in April 2021 by the international Catholic pastoral charity and pontifical foundation Aid to the Church in Need (ACN International), no fewer than sixty Christian churches and chapels have been the targets of vandalism in Chile since October 2019.

Little is left of the Church of the Assumption but the external shell of the building, while the complete reconstruction of the interior is yet to begin. However, this is likely to take years, since under Chilean law the building is designated as part of the national patrimony. Nonetheless, the parish community has been grateful to accept the financial help of ACN International, which has made it possible for them to reconfigure a parish room so that the Catholic faithful can continue to gather to celebrate the Eucharist. At the same time, ACN is currently working on a project to refurbish and restore some of the parish offices for the use of the faithful, including rooms for catechesis and a place for funerals to be held.

The images of the church tower collapsing in a sea of flames shocked not only the local people and the Catholic faithful but the whole country. And a group of young students from one of the university departments in the city, the Workers and Farmers University Department (Departamento Universitario Obrero y Campesino DUOC), a professional and vocational centre teaching technical skills such as construction, electrical installation, restoration of historic buildings and risk prevention, were affected by the sight and contacted the parish priest to offer their help.

As a result, these students, academics and volunteers launched the project “Sursum Corde” (Lift up your hearts) with the aim of assessing the damage, cleaning and rescuing items of sculpture and paintings with a view to their future restoration.

Those involved in the project recalled how difficult and painful it had been to enter the church after its destruction and how raw their emotions had been. But despite everything, they immediately set about the task of cleaning up the interior. From the midst of all the ashes, they managed to rescue pieces of charred timber, pages of the Gospel and fragments of the paintings that had adorned the walls of the church, in the hope of being able to restore them. This was also the moment when the idea came to them of creating something symbolic, something that would show that love could still triumph over such destructive violence.

And so they commissioned a goldsmith to fashion a number of pectoral crosses from the remnants of the burnt wood from the Church of the Assumption. One of these was given to Salesian Bishop Alberto Lorenzelli, the auxiliary bishop of Santiago, who later sent it as a gift to Pope Francis in Rome, just a few hours before he went into hospital for surgery at the beginning of July 2021.

Speaking to ACN, Bishop Lorenzelli described how Pope Francis had been deeply moved by the gesture, given that this cross “has a deep significance, recalling a church that was burnt out at a particular moment in time, a deep wound experienced by the Church in the face of such acts, but also by the people of Chile.”

During the interview, Bishop Lorenzelli recalled similar incidents that had occurred, including the attack on the national shrine of Our Lady (María Auxiliadora) in Santiago in June 2016 while he was the rector there. In the midst of the protests, a group of young demonstrators had entered the church and removed a statue of Christ, which they then smashed up in the street. “It was an action that shocked Chile and the whole world” Bishop Lorenzelli explained, at the same time emphasising once again the many messages of solidarity that he had received from different people, including from the Jewish and Muslim communities, who were likewise shocked by these events.

“What hurts most, as on this occasion, is that these were young people. We have so many young people who have lost their sense of values and forgotten their history. They are aged around 16 to 20 and they are rebelling against every institution, against every form of authority. They are an uncontrollable movement without a leader, anyone at the head, with whom one can engage in dialogue,” the bishop added sadly. That is why it is so important that these young people have become involved in the reconstruction of the church and the symbolic gesture of the wooden pectoral cross – a proof that, while there are undoubtedly many young people who destroy things, there are many other young people willing to put themselves at the service of their brothers and sisters and convey a message of love and forgiveness.