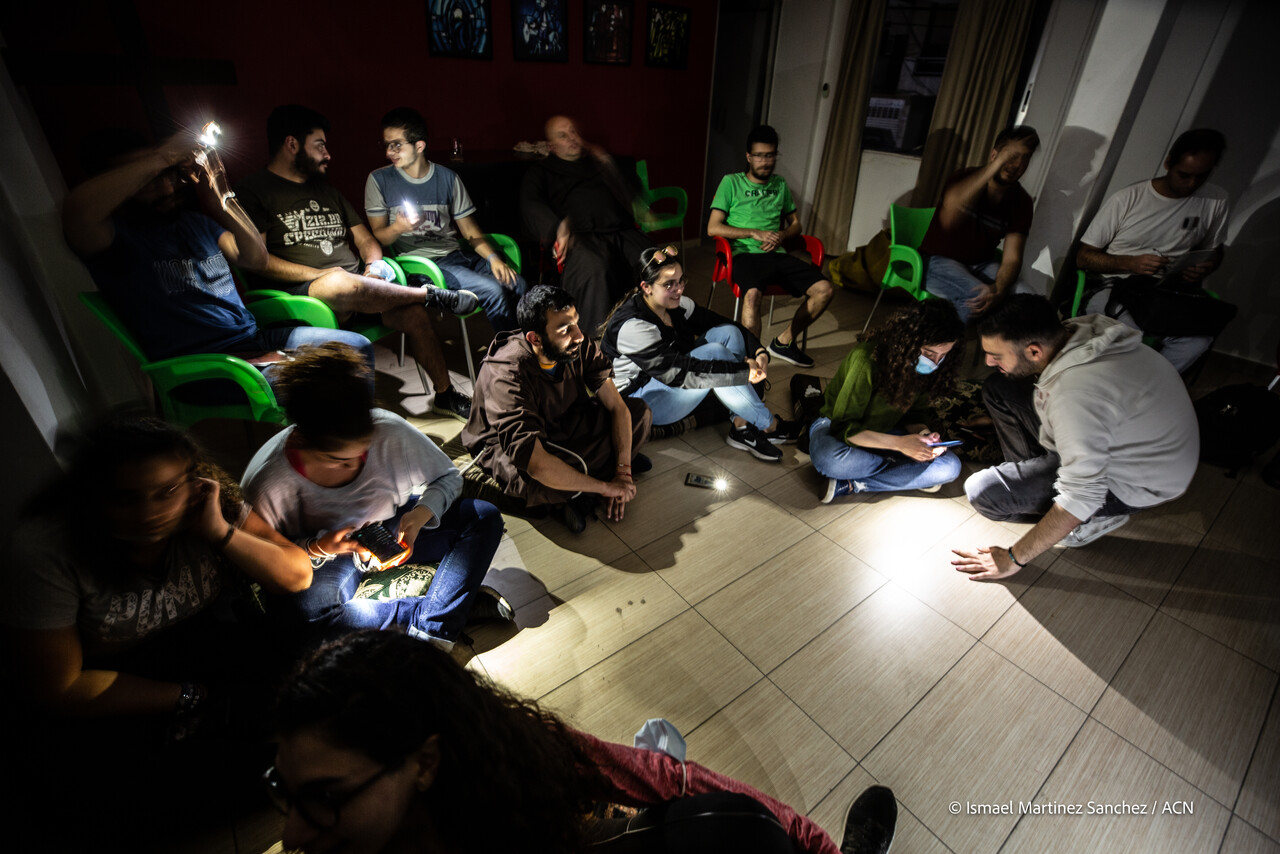 Christian students in Lebanon under pressure to leave: “We feel our country doesn’t want us”

For many Lebanese Christian students, the University Pastoral service is a lifeline that keeps them in the country, when everything around them seems to give them reasons to give up.

Imagine a country where overnight your savings vanished and your salary was worth 20 times less than the day before. Imagine your parents worked hard to get you through university, but now can’t afford the tuition. Not that it really matters, because the teachers have been on strike for three years and even though some give their lectures online you don’t have electricity, or the money to afford a generator, so you can’t attend. In despair you start looking for a chance to emigrate, but the government is so broke, it can’t afford the paper to print passports on, so you’re stuck.

Hell? Not quite. We call it Lebanon. To these university students it is called home.

Around 20 young men and women are gathered at the Beirut headquarters of the University Pastoral – a church service that provides support and activities for Christian students in Lebanon – meeting a group of representatives from pontifical charity Aid to the Church in Need (ACN) and trying to describe what life is like in a country gripped by one of the worst financial crises in history, aggravated by political infighting, a massive explosion that levelled the Port district, and a pandemic.

Maria, an architecture student says that she has to use the torch on her cell phone to do assignments for her degree and sums up the general mood. “We feel that our country doesn’t want us here.”

“We want to live, but we can’t. For a long time, we were unable to meet friends because of Covid and we can’t go out and have fun because of the economic crisis”, adds Rebecca, sitting on the floor in the overcrowded room.

Deprived of a social life, many would be happy enough to just get on with their studies, but since the state universities can’t pay their staff, the teachers have been on strike for almost three years, with no prospects of going back. In some cases, students are being illegally charged 20 dollars to sit exams. Considering a month’s wages are usually no more than 50 dollars since the economy crashed, many simply can’t afford it.

There are Christian universities – six Catholic and one Greek Orthodox – where things are better. Here the teachers are not on strike, but since many can no longer afford to drive to work, they deliver their lectures online, which presents a whole range of challenges in a country where electricity is scarce and not everyone can pay for generators.

Faced with this scenario, it is surprising that only half those present raise their hands when asked if, given the chance, they would leave Lebanon. “Until three years ago I never thought of leaving, but these two last years were miserable. My father is a carpenter, he has had no work in the past five years. We have no more savings. We don’t have a choice; we have to leave. My parents don’t encourage me, but they wouldn’t mind my going”, says Stephen, who is studying computer engineering and, like most of his peers, works up to 13-hour shifts to be able to cover the expenses of the private university he attends.

Sitting among the students, Archbishop Georges Bakouny, who oversees the University Pastoral and was present in the event, says he understands their despair. “Fifteen years of my life were during the civil war, but the economic situation was never this bad. What can we do?”, he asks.

It turns out, however, that they do quite a bit. Every student present raises a hand when asked if the University Pastoral service makes their life more bearable, and examples come gushing forth. “Everyone here helped me at some point in my life. If I arrive sad, they understand even before I say anything”, says Anthony, who studies engineering. Asked to describe the atmosphere he simply opens his arms and says: “Too much love”.

Jennie admits that the group saved her from a difficult situation. “At the beginning of University, I was in a really dark spot, and this place took me out of it. I am staying in Lebanon because of this group. I’m scared I wouldn’t find this experience abroad. They are like a family to me.”

Besides a place to socialise and be with friends, the University Pastoral provides students with many opportunities to learn practical skills, such as working in media, logistics, playing in the band, performing with the theatre team, or preparing spiritual activities.

To some, like Jennie, it teaches the difficult art of forgiveness, which in Lebanon is a survival skill. “Living with different communities is very difficult. It is easy to stir up memories of violence. Radicalisation is on the rise, even among people who didn’t live through the war. Even Christians are clashing. Every one of us is in survival mode. Even if reforms made the economic situation better, in 10 or 15 years it will happen again. There has been no reconciliation, no recovery from trauma. This place helped me understand and forgive the murder of my grandfather during the civil war.”

Clearly, the work of the University Pastoral is more important now than ever. Unfortunately, however, the crisis in Lebanon has also threatened the survival of this service, and it is only able to continue to distribute hope to the students – in the form of socialisation, activities, and spiritual and practical formation – because of the help it receives from ACN to cover its annual budget.

As for the gathering, in a room that has become too small for such a crowd, it soon erupts into music, while Sister Raymonda cooks up a humble but delicious meal for all. Students take the hands of their visitors to teach them the traditional dance steps they are performing, and all the pain so recently expressed is cast out by laughter and singing, showing all that this definitely isn’t hell, it is Lebanon after all.

Featured Image: A power outage during the regular meeting of the pastoral university group for young people of all Catholic rites. © Ismael Martínez Sánchez / ACN.