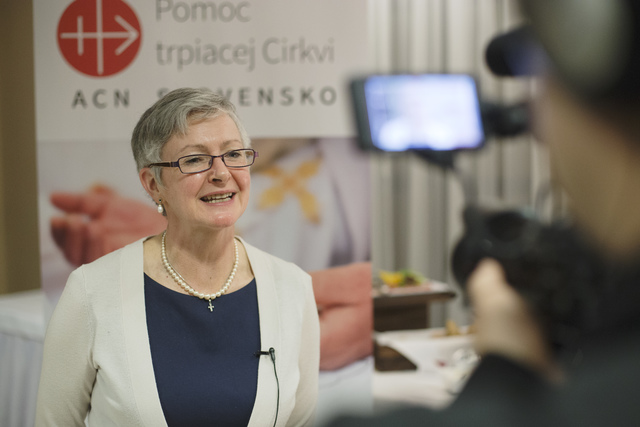 A native of Northern Ireland, Regina Lynch has been working for the past 40 years in support of Christians suffering persecution, discrimination or other forms of extreme need. She has been head of the Projects Department of ACN International since 2008.

“Including a representative of ROACO in the papal entourage of the upcoming papal visit is a tangible sign of how much the Holy See values the work of the agencies in the Middle East, East and Central Europe, India, Eritrea and Ethiopia,” she explains.

Regina Lynch first visited Iraq in 2008, where ACN has been helping since 1972. But she especially recalls her visit to Iraq at another historic moment for the Christians of the country, in the fateful August 2014, just four days after the forces of the so-called Islamic State had invaded the Christian towns and villages of the Nineveh Plains.

During her time with ACN, Regina has travelled to almost 30 different countries in order to witness at first hand the difficulties faced by the Church and to see how best to alleviate the suffering. However, this will be the first time that she has travelled together with the papal entourage.

She considers the visit of the Holy Father to Iraq a historic journey: “The Holy Father’s trip to Iraq is such a sign of encouragement, a message of hope to the Iraqi Christians who have been tested in their faith all down the centuries. And you know, when you are a minority, you can feel very alone sometimes. You can feel abandoned, and the fact that Pope Francis is coming now in such a difficult time is going to give the Iraqi Christians hope.”

For Regina Lynch it is a great honour to be the representative of ROACO during this historic visit: “We are very grateful for the existence of the ROACO,” she explains. “It is not only a source of information and an advocate of projects from the Eastern Catholic Churches, but it also provides a platform for important exchanges among those agencies such as ACN, which commits itself to supporting both spiritually and financially these ancient Churches with their unique heritage. And in so doing we help the Church to breathe with both lungs – from the East and the West.”

Featured Image: Regina Lynch, Director of the Projects Department of ACN International. Copyright: Aid to the Church in Need.