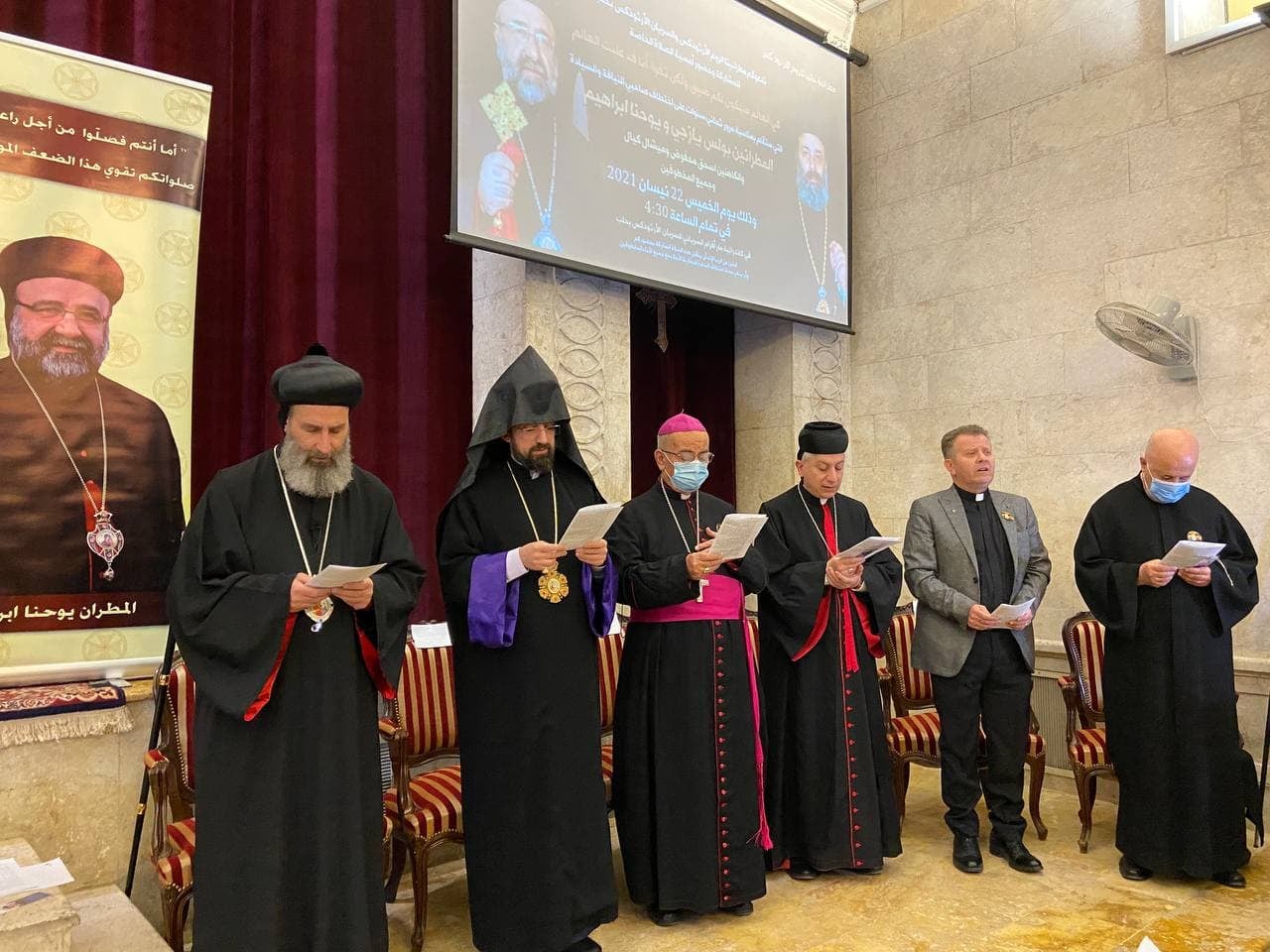 Eight years after the abduction of two Syrian Bishops

8 years on since the abduction and we still have no news of these two missing Bishops.

With a prayer and commemoration ceremony in St. Ephrem's Syrian Orthodox Cathedral in Aleppo, all the Syrian Christian Churches marked the 8th anniversary of the abduction on 22 April 2013 of the Syrian Orthodox Bishop Youhanna Ibrahim and the Greek Orthodox Bishop Boulos (Paul) Yazji. Also, two priests Father Michel Kayyal (Armenian Catholic) and Father Maher Mahfouz (Greek Orthodox) were remembered during the memorial.

Representatives of all Orthodox, Catholic and Protestant rites and denominations from Aleppo took part in the gathering. Speaking to the pontifical foundation ACN after the ceremony, Archimandrite Mousa Al-Khasi, the Greek Orthodox Vicar in Aleppo, explained: “We gathered here to pray for the safe return of Bishop Boulos Yazji and Bishop Youhanna Ibrahim to their archdioceses. This event is sad for all of us. But with the Grace of God and the solidarity of our brothers and sisters, we have hope.  God is the almighty and everything is possible by His Grace.”

On 22 April 2013 Bishop Yohanna Ibrahim, of the Syrian Orthodox diocese of Aleppo, and Archbishop Boulos Yaziji, of the Greek Orthodox diocese in the same city, were abducted in the town of Kafr Dael, around 12 km (7.5 miles) west from the Aleppo city centre.

At the time the two bishops were negotiating the release of two priests, Father Michel Kayyal (Armenian Catholic) and Father Maher Isshak Mahfouz (Greek Orthodox), who had been abducted in February of the same year. On arriving at a checkpoint, their car was surrounded by a group of armed jihadists, killing the driver, who was a deacon. From the moment of the kidnapping to this day, thousands of attempts and tons of efforts to obtain any information about the fate of the two bishops have remained fruitless.

In a statement by the executive president of ACN, Thomas Heine-Geldern, read during the celebration, the charity expressed its solidarity with the Syrian community:  “During these eight long years the pontifical foundation Aid to the Church in Need has prayed and encouraged its benefactors around the world to come together and to implore in faith for their prompt liberation. We cannot forget them, as St. Paul tell us in his letter to the people of Corinth: “If (one) part suffers, all the parts suffer with it; if one part is honoured, all the parts share its joy” (1 Corinthians 12:26)

The executive president of ACN promised that the foundation would continue praying for the two bishops: “Eight years after their abduction ACN never tires of asking for their life, liberation and peace. These two shepherds accompanied their flock in times of difficulty and set an example of faithful dedication. May the God of Life, the Lord of the History be with them.”

Quoting Pope Francis’ apostolic letter Maiorem Hac Dilectionem he stated: “Worthy of special consideration and honour are those Christians who, following more than closely the footsteps and teachings of the Lord Jesus, have voluntarily and freely offered their life for others and persevered with this determination”.

Archimandrite Mousa Al-Khasi sent a message of gratitude for the benefactors of ACN: “Thank you, all the members of ACN, for your solidarity and for your help to our people.  It gives us hope, that the feast of the resurrection of Jesus Christ is above all this and it will help us, in these difficult times, to be by Him forever.”

Featured Image: Prayer and commemoration ceremony on 22.04.2021 for the two Orthodox Bishops abducted 8 years ago. Photographer: Riyadh Jerjo. Copyright: Aid to the Church in Need.