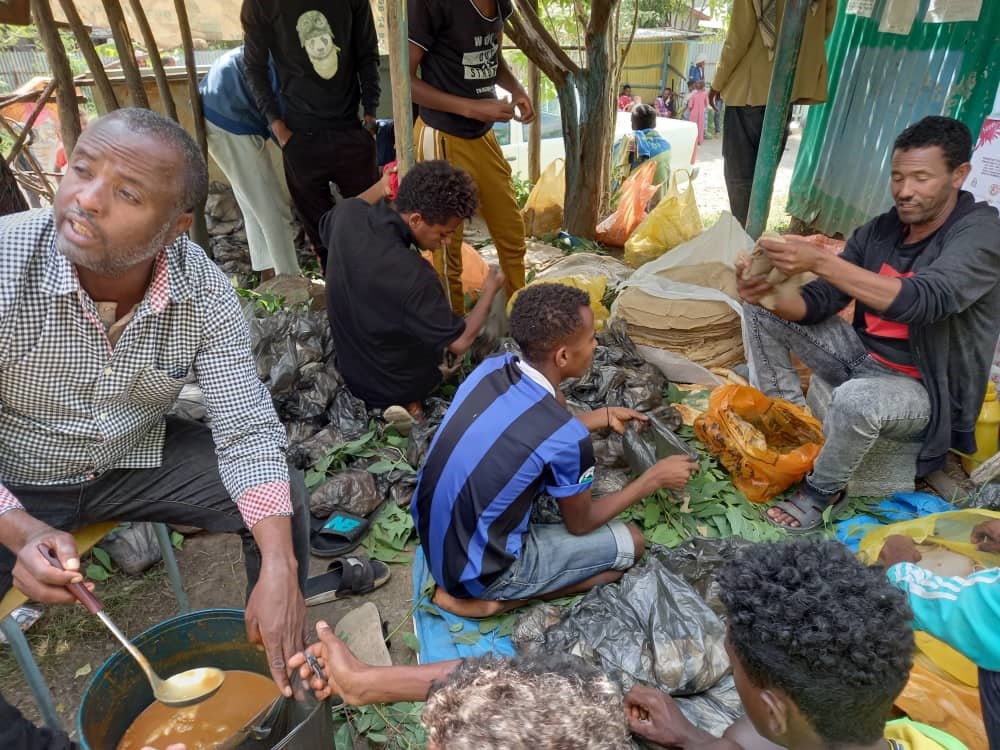 The missionary, who cannot be named for security reasons, spoke to pontifical charity Aid to the Church in Need – International (ACN) about the situation in Northern Ethiopia, where the conflict between Government forces and those loyal to the Tigrayan People’s Liberation Front has become more serious.

Until the end of October the priest was based in Kombolcha, a town located on the outskirts of the Amhara region, close to Tigray, and about 380 km north of the capital Addis Abeba, which was flooded by thousands of people fleeing the conflict zone, with even more in neighbouring towns such as Dessie. As the days went by, initial worries of how to provide food and humanitarian aid to the internally displaced people (IDPs) turned to concern over fighting, which kept growing closer.

“Those who had relatives in the capital sent their children and wives away. We also sent some of our seminarians to Addis Abeba, but we, the priests, stayed to be with the people who fled, to see how things developed.”

“We saw much suffering. Many people were killed and others had to flee and required food, water, medicine, and places to stay. Our small town of Kombolcha had over 4,000 IDPs. We did what we could to gather food, blankets, and water but it was just a drop in the ocean of necessity. But as they say, it is better to light a candle than to curse the darkness.”

In the final days of the month, however, the situation became worse as fighting drew closer, with Tigrayan forces pushing back a Government offensive and taking Dessie and Kombolcha. It was at this point that the missionaries were forced to leave. “Things have become bad. Now we are forced to flee,” wrote the priest from Kombolcha the evening before the town was overrun. “I have already sent other fathers, now I am remaining alone with the watchmen. I will see if I can also run away tomorrow.”

The remaining refugees managed to escape Kombolcha before the arrival of the Tigrayan forces and made it 50 km south, towards Addis Abeba, before having to stop because the road was blocked. But the missionary priest was able to inform ACN that they are in safety. “I am out of danger. The roads are full of people,” he explains in a message dated 1 November.

Fighting between the majority Amhara Government soldiers and Tigrayan forces began one year ago, on 4 November 2020 and soon saw the involvement of Eritrean military as well. The reasons for the war are complex, but the results, as always, have been especially tragic for the civilian population.

Ethiopia’s rich Christian heritage is also under threat, with the cities of Lalibela – known for its rock-hewn churches – and Axum – the former capital of the Ethiopian empire and, according to local tradition, the current resting place of the Ark of the Covenant – having been affected by the fighting.

The recent swearing-in of Prime-minister Abyi Ahmed for a second five-year term carried some hope of peace, but this was short-lived. “Signs bearing a flower and the words ‘New Beginnings’ were seen across the capital Addis Abeba ahead of the swearing-in ceremony. After the ceremony, we hoped that the war would end but we were surprised that it was still going on and getting closer to us in Kombolcha.”

The conflict in Ethiopia means that many of the more difficult regions have become inaccessible for journalists and humanitarian agencies. Faced with the growing tension, the Catholic missionaries know that material aid is hard to come by and ask especially for prayers. “We are humbly asking for your prayers for peace and security in our region, as well as other types of support,” says the priest.

Ethiopia is divided roughly in half between Christians and Muslims, although the country’s glorious past is inextricably linked to the Christian faith, making it the oldest independent Christian country in the world. Most Christians belong to the pre-Chalcedon Ethiopian Tewahedo Orthodox Church, which is in communion with other Oriental churches such as the Coptic and Armenian churches. There is a small but vibrant Catholic community, divided into Latin rite and Ethiopian Ge’ez rite.

Featured Image: Refugees in Kombolcha - Ethiopia. Copyright: Aid to the Church in Need.