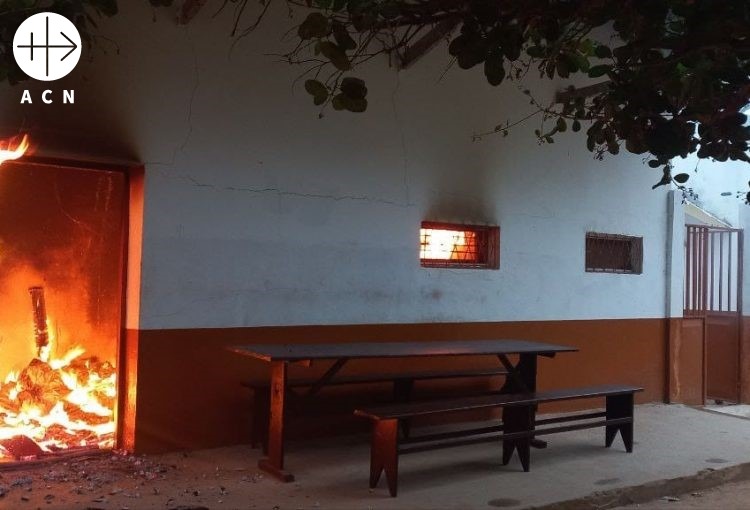 On the night of Tuesday 6 September an Italian religious sister, aged 83, was brutally murdered in an armed attack on the Chipene mission in the diocese of Nacala.

Sister María de Coppi, a Comboni religious sister who had been working for 59 years in Mozambique, was shot and died instantly in the attack, which began at 9.00 p.m. and continued until 2.00 a.m. The attackers ransacked and burned not only the mission church but also the school, the health centre, the dwellings of the priests and of the nuns, the library, the boys’ and girls’ boarding houses and the vehicles belonging to the mission. “They destroyed everything”, reported Bishop Alberto Vera of Nacala, speaking on the telephone to the Portuguese national office of the international Catholic pastoral charity and pontifical foundation Aid to the Church in Need (ACN).

“The attackers broke open the tabernacle and vandalised part of the sacristy, looking for whatever they could find – probably money”, the bishop continued. Speaking to ACN, Bishop Vera said he did not think this was in fact an attack against the Church, but rather a way of seeking international attention. “This is a major coup for them because there were foreign religious here… They are seeking some kind of international publicity. I don’t think it was directed against the Church. What they did was an act of terror.”

At the time of the attack there were at least three foreign religious sisters at the Chipene mission, two Italians and one Spanish nun, and also two Italian priests. Prior to the attack, owing to the dangerous situation in the area they had evacuated all 35 boys and most of the 45 girls who were living in the boarding houses and most of them had already returned to their families. Nevertheless, there were still 12 girls staying at the mission.

According to eyewitness reports ACN International was able to glean from local missionaries, the terrorists had arrived at the sisters’ convent and forced them to leave. The other religious sisters had fled together with the girls, but Sister Maria, who was about to leave the house, suddenly thought of the little ones who might still be in the house and came back. It was then that they shot her. The telephone lines were also cut, making it impossible to communicate with the mission for several hours, the bishop explained.

Mozambique has been suffering from an Islamist insurgency since 2017 that has already claimed around 4,000 lives and left hundreds of thousands of refugees. Although this insurgency is centred principally in the north of Mozambique’s northernmost province of Cabo Delgado, these more recent attacks are confirmation that the terrorists have extended their operations further south of the region, into the neighbouring province of Nampula.

The attack on the Catholic mission happened just a few hours after various other locations in the province of Nampula had similarly been the target of the terrorist violence, leaving a number of people dead and dozens of houses burned down.

“Since July this year, it appears that the ‘Islamic State' has taken control of the group. There were some indications of this before, but it was not altogether clear. For us, the situation is more sensitive than it was last year because now the Christians are beginning to be targeted and the war is taking on a more religious dimension. But although we don’t know to what extent they are linked to the Islamic state, it looks as though there are going to be fewer options for resolving the problem… There will be no chance of dialogue with them, especially if they are assimilated by the Islamic State”. This was the view expressed to ACN International by one missionary in Pemba, whom we prefer not to name, given the difficult circumstances they are facing in the region.

Similarly, Ulrich Kny, who heads ACN’s project desk for Mozambique and who visited the dioceses of Pemba and Nacala at the end of last year, when the southern part of Pemba diocese and the province of Nampula were still considered to be relatively safe and were welcoming thousands of internally displaced people from the northern part of Cabo Delgado, confirms that the situation has worsened since then. “The propagation of the terror within the province of Nampula in the last few weeks and the fact that for the first time since the outbreak of this so-called `insurgency’ a Catholic nun has been murdered by the terrorists only increases our concern that this terrorism is extending throughout the whole north of the country. At the same time, we are seeing that the religious dimension is steadily becoming more prominent for the terrorists.”

According to Mr Kny, one of the underlying problems is the economic and social inequality throughout the region. “The whole region, with its rich resources and the hitherto peaceful coexistence between Muslims and Christians, should in fact offer a great potential for development, but the neglect and the poverty of whole sections of the population make it instead a dangerous breeding ground for the radicalisation of the young.”

Speaking on behalf of ACN International, Ulrich Kny appeals for prayers. “May the sacrifice of the life of Sister Maria De Coppi, who shed her blood trying to save the young girls in the boarding house from the terrorists, help us to find solutions for a regional development that will benefit all the population and provide new opportunities for the young, so that peace may return to the region.”

Featured Image: Building at Chipene mission in flames.Copyright: Aid to the Church in Need.