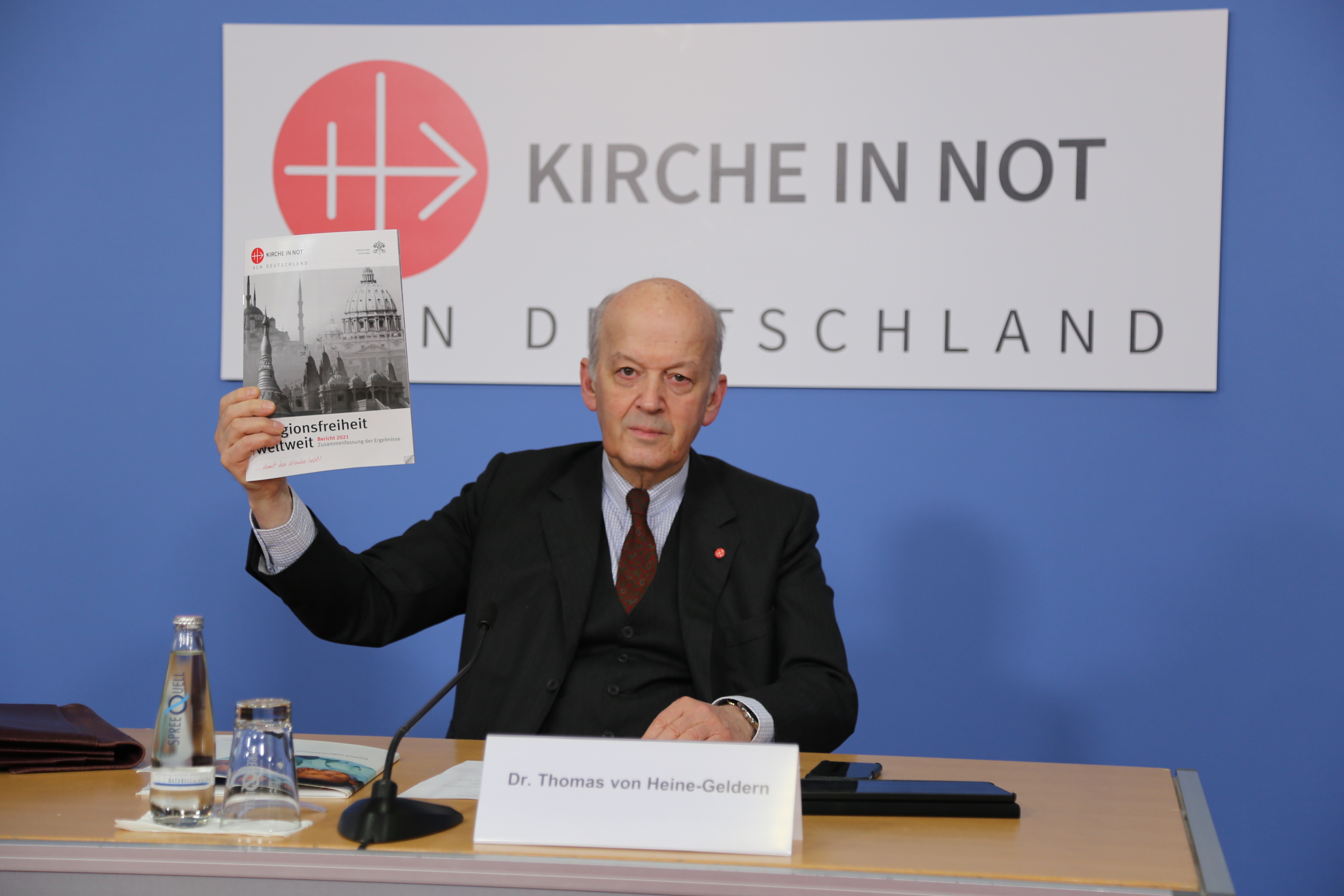 Gratitude and concern in the service of persecuted Christians

As the year comes to an end and a new one begins, the executive president of the pontifical foundation Aid to the Church in Need (ACN), Dr Thomas Heine-Geldern, called attention to the rise in religious persecution worldwide. Dr Heine-Geldern also deplored the growing intolerance for Christian beliefs in the Western world. At the same time, the president of ACN pointed out that more attention is being paid to the victims of religious persecution. He released the following statement:

“In 2021, the work of ACN was marked by gratitude and concern: we are deeply grateful for the fact that our work was again visibly blessed this year by God Our Father, and we were able to continue to fulfil our mission.

We are also grateful to our many benefactors, friends and allies worldwide: without them, it would not be possible for us to relieve the hardship of beleaguered Christians in need and to draw attention to the victims of religious persecution.

Our special thanks go to Our Holy Father Pope Francis. His visit to Iraq last Spring gave solace and hope to the local Christian minority. For years, the Christians in Iraq have trodden an arduous Via Dolorosa and have yet to reach its end. Most importantly, the Holy Father brought to the attention of the international community the situation of the Christians in Iraq and in the entire Near East. Although the Christians are a constituent part of their native countries, far too often they are treated as second-class citizens. In Iraq, Syria and Lebanon, they are also suffering from the after-effects of the war and desperate economic situations. The exodus of the Christians continues unchecked. ACN is working together with benefactors and project partners to offer the Christians in the Near East prospects for a future in their homelands, to make it possible for them to live a life of dignity and, most importantly, to relieve their plight.

In early December, the world learned of a ray of hope for the coexistence of Christians and Muslims in the Arab world, in the form of the consecration of the Cathedral Our Lady of Arabia in Bahrain, the construction of which was co-sponsored by ACN.

Particularly gratifying for the fulfilment of our mission is the overwhelming response to our report Religious Freedom in the World Report 2021, which we released in April in collaboration with international journalists and experts. The report not only covers religious persecution in many countries of the world but is also a sign and proof that all of us – Churches and religious communities, NGOs, politicians and public figures – have to stand up together for the human right to religious freedom, which is deeply rooted in human dignity. The freedom of religious denomination is a gauge of our humanity.

The initiative “Red Wednesday/Red Week” has developed into a highly visible, worldwide symbol for the plight of Christians. Launched by ACN in 2015, a growing number of churches and institutions all over the world – currently tens of thousands of them – are participating in the initiative that is held in late November. Churches and other landmarks are illuminated in blood-red light and prayer sessions and divine services are held for persecuted Christians. In the name of our beleaguered brothers and sisters, I would like to thank all participants for their solidarity and prayers.

We are saddened by the reports of religious persecution and violence that reach us almost on a weekly basis. Priests, religious and laypeople are being killed, kidnapped or abused as they carry out their service. In particular, the current situation in India and Nigeria fills us with deep concern and we are standing by should our assistance be needed.

The situation continues to be quite dramatic in the countries of the African Sahel region and in Mozambique where terrorism is spreading. Although the violence affects all, Christians are the hardest hit. It is deeply regrettable that in many areas terrorism and violence are preventing the Church from carrying out its pastoral and social work. Not only the Churches and monastic communities but also hospitals, schools and many other facilities that are run by the Church and are of vital importance to the people have been forced to close. The local Church is now facing another Herculean task: providing care and assistance to the hundreds of thousands of refugees and displaced persons.

In Western countries, ACN has likewise taken note of a rise in the number of acts of violence against religious organisations as well as a development, something which Pope Francis calls “polite persecution”. This involves the gradual eradication of religious beliefs from public life under the cloak of supposed “tolerance”. The most recent example was the release of an internal document of the European Commission on integrative language, which recommended avoiding the use of Christian terminology and names, for example by replacing the word “Christmas” with “holidays”. The document was subsequently withdrawn, a decision we support because, although inclusion is indisputably a justified concern, in this case, it would have meant the exclusion of the largest faith group of the European Union. After all, almost two-thirds of the citizens of the EU are Christians.

As the year draws to a close, we particularly would like to commemorate the victims of the COVID-19 pandemic: many religious sisters, bishops, priests and catechists have died from the disease while carrying out their service. They sacrificed their lives to be close to the people who had been entrusted to their care – in spite of the dangers to their own health. A remarkable witness of their devotion.

The year 2021 has been marked by gratitude and concern! We are now preparing to face the emerging challenges of 2022 armed with our faith in God and confidence, whereby we understand confidence as a virtue that does not disclaim these fears and worries, but constantly seeks to find new areas to serve our mission.”