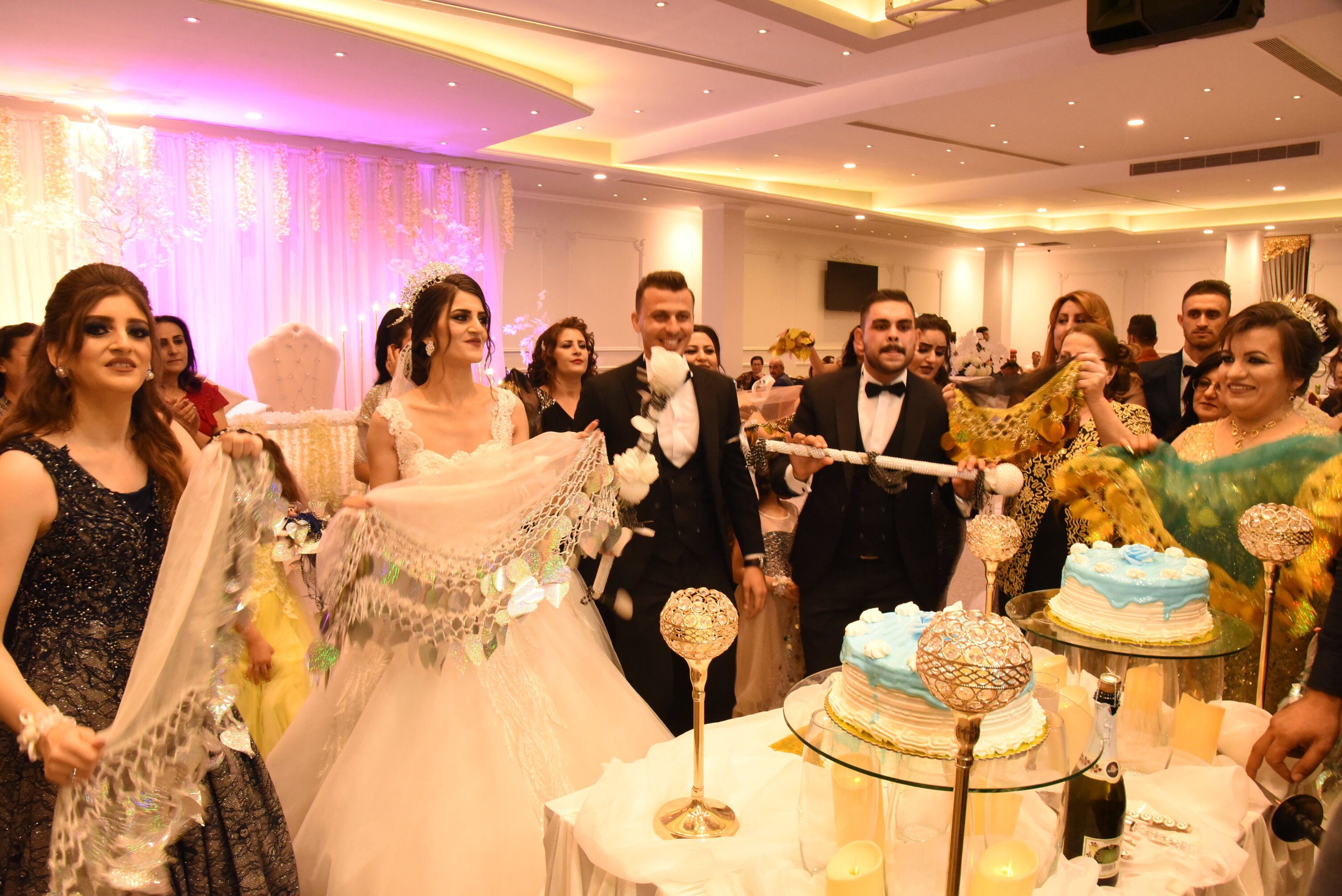 Seven years after the invasion by the Islamic State (IS) group, young Iraqis are taking their chances and are moving back to their homeland.

6 August 2014, is a day that Iraqi Christians will not be able to erase from their memory. On one fateful night, the Islamic State swept across the Nineveh Plain and thousands of families were forced to flee to save their lives. With little more than the clothes on their back, they reached Erbil, the capital of Kurdistan, leaving everything behind. The lives of many young Christian Iraqis changed that day, including that of Rita and Rami.

Everything in this Iraqi region, located north and east of Mosul, falls into either “Before IS” or “After IS”." This is the case for Karamlesh, a Christian village important to Chaldean Catholics because it was home to three previous Chaldean patriarchs. “Before IS” it had about four thousand residents. Almost all fled before the jihadis arrived. The parish priest was one of the last to leave. Only a few elderly people stayed behind. 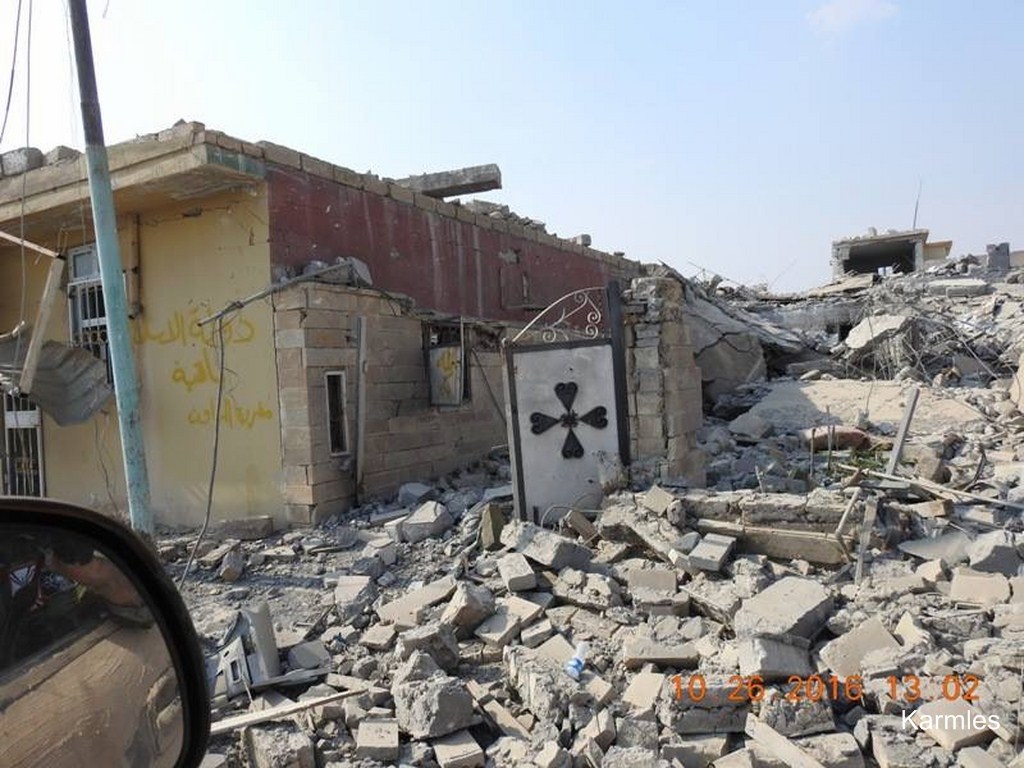 Destroyed buildings in the Nineveh Plains. Copyright: Aid to the Church in Need.

The Islamic State imposed a reign of terror in Karamlesh, using the village as an important base in its battle against Kurdish fighters, the Peshmerga, and Iraqi forces. In the village, tunnels were dug so that IS fighters could move around, including under the Church of St Joseph and the Shrine of St Barbara. The Church of St Adday was set on fire, its sacristy destroyed, and the cemetery vandalised. IS fighters were lodged in the city's houses, which were connected to each other by holes punched in walls and through tunnels. The kindergarten was used as a weapons factory.

Rami and Rita were among the thousands of Christians who fled Karamlesh finding refuge in Erbil. The two young people barely knew each other at the time. Rami was 22 years old and found a place in one of the many camps the Church established for displaced families. Rita, who was only 16 years old,  and her family found shelter in a rented home. One day, Rita visited the camp where Rami was staying and met the young man. The two became friends during this difficult period.

On 24 October  2016, the Iraqi army liberated Karamlesh. Before they fled, IS militants left hate messages everywhere, on doors and walls. They looted or destroyed everything; air strikes by the liberation forces added to the destruction.

Rami was first to return to Karamlesh with his family. Very quickly the village saw new shoots of life. Crosses were soon back on the domes of some of the main churches. Roads, schools and churches were rebuilt. Soon Rita too returned. Little by little, life in the village revived; among the stores that reopened were two barbershops and a bakery. 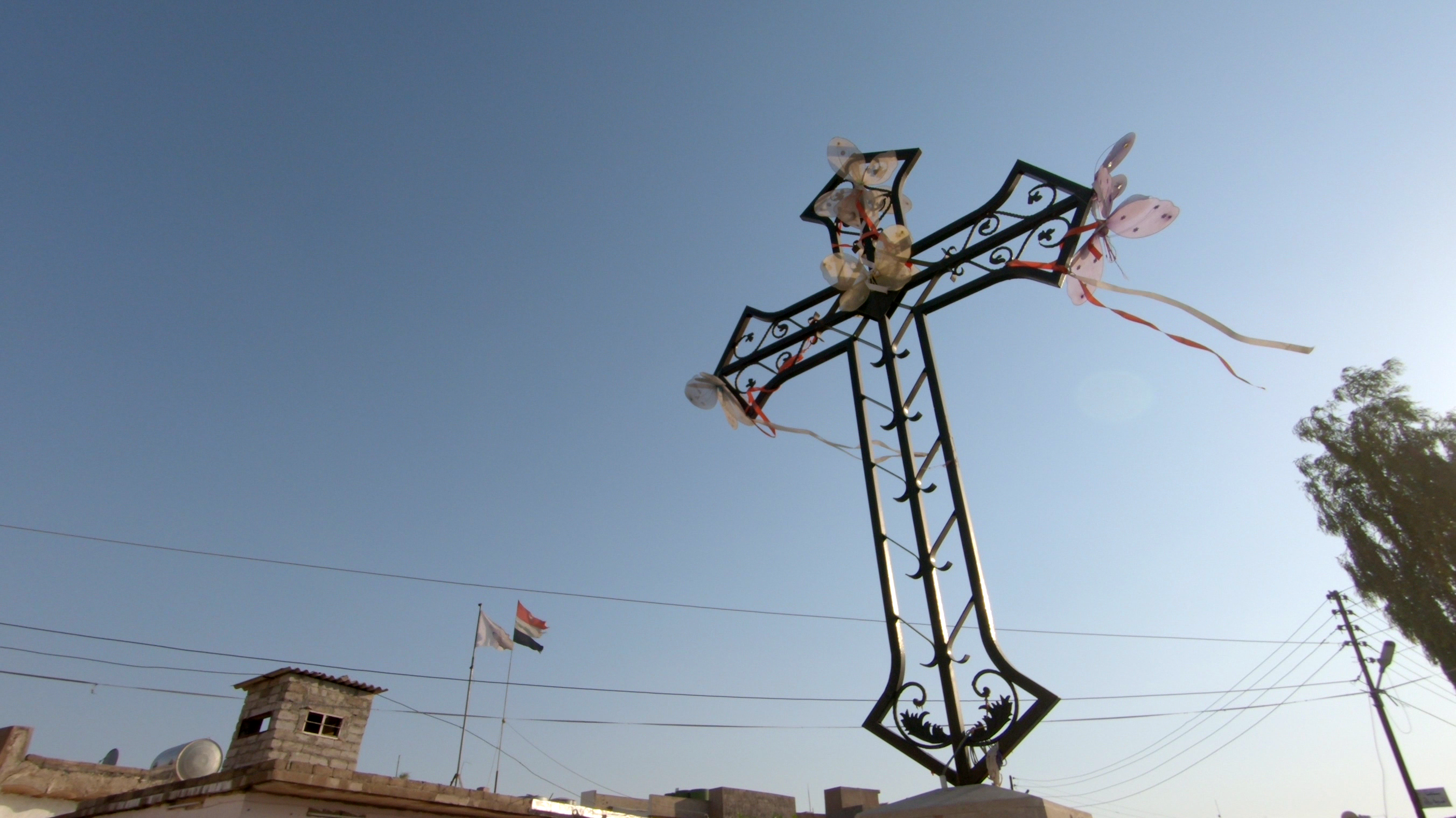 A cross in Iraq. Copyright: Aid to the Church in Need.

“Locals are very friendly and peaceful,” explained Rami. “This is why we never suspected that something so terrible could happen to us. The Islamic State turned our homes into military installations. The Church of St Barbara became their headquarters.”

Overall, almost half of the families have returned, although many saw members stay in the capital or leave the country. Currently, only a third of residents are back in Karamlesh. In many homes, there are still many empty chairs around the family table.

Rami and Rita decided, however, to take a step further. They boldly did what seemed impossible seven years earlier, when they had to give up everything and flee, living first as displaced people and then restarting from scratch: they decided to stay and start a new family. “Our life is not without risks but life won’t stop, risks or no risk. We have to keep going,” Rami told the Aid to the Church in Need (ACN) Foundation.

They were the first couple to celebrate their wedding at the St Joseph Chaldean Centre. Before the arrival of the jihadis, the facility was used for multiple purposes: weddings, wakes, conferences, films, debates, exhibitions, youth activities and much more. It was also used for celebrations by families from many surrounding villages and by the Shabak, an ethnic and religious minority living in Karamlesh.

The Islamic State left the building badly damaged: the roof was damaged, the ventilation system, sanitation facilities, electrical power, plumbing, kitchen and telephone system . . . everything was unusable. Walls on the upper floors were broken because jihadis used them to fire into the vast plain.

With the help of ACN Foundation’s benefactors, all of this is a thing of the past. Rami and Rita were able to inaugurate the St Joseph Centre and celebrate their wedding in the place where they were born, the place they had lost and then regained. Young and old toasted the young couple amid traditional Iraqi dances. Seven years after fear and death overwhelmed Karamlesh, new life and hope are taking root.

“On the wall of the church they [the jihadis] wrote: 'There will be no more Christianity in Iraq.' They did not succeed. Thank God, we, Iraqi Catholics are back,” Rami says.

Featured Image: Renovation of partially destroyed marriages and conferences center of St Yonan and St Joseph. Copyright: Aid to the Church in Need.