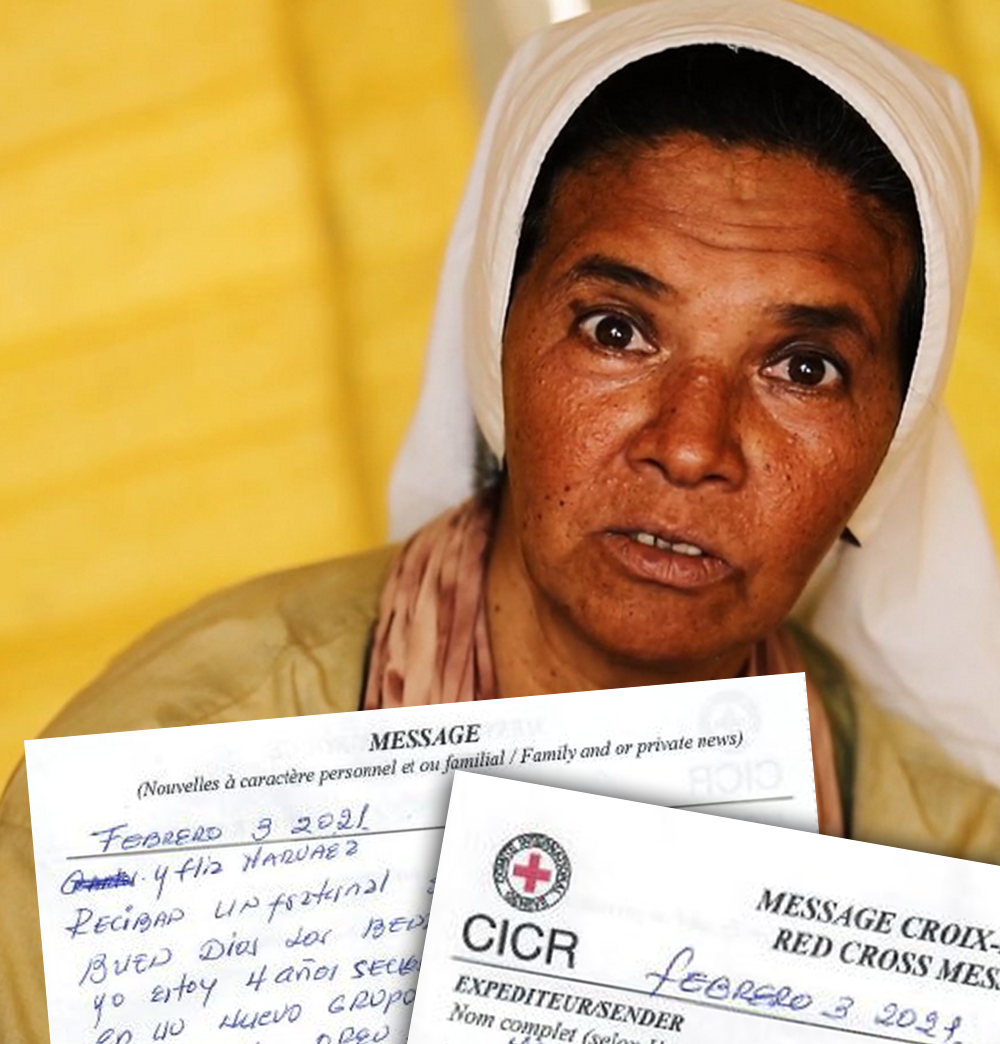 Latest message to her family from Sister Gloria, a hostage in Mali since 2017

“Pray a great deal for me…”

The Franciscan religious sister, Gloria Narváez Argoti (57), who was abducted in 2017 in Karangasso, Mali, has sent another message, via Red Cross International, to her brother Edgar Narváez Argoti. The note, 11 lines long, has been seen by representatives of the international Catholic pastoral charity and pontifical foundation ACN International. It is dated 3 February  2021 and written in Spanish, in her own hand, in capital letters in blue ballpoint pen. The family received the letter in May.

“I send everyone my warmest greetings. May the good Lord bless them and grant them health. I have been held prisoner for four years, and now I am with a new group,” she writes. Sister Gloria identifies the terrorist group currently holding her hostage as the GSIM (Groupe de soutien à l'islam et aux musulmans), the Group for the Support of Islam and Muslims.

According to all indications this is a group belonging to a jihadist alliance in the Sahel, with links to Al Qaeda. In her letter Sister Gloria asks the prayers of everyone, that she may gain her longed-for freedom. “May they all pray a great deal for me. May God bless them all. I am hopeful that God will help me to regain my freedom. Your loving sister, Gloria.”

The note is addressed to her brother, Edgar Narváez, a schoolteacher in the town of Pasto, in Colombia, where she was born. Speaking to ACN International from Colombia, her brother recalled that in his first note to his sister he had informed her that their mother, Rosita Argoti de Narváez, had died in September 2020 at the age of 87, “unable to endure the sadness and despair any longer.” His sister had replied months later. “She sent greetings to the family, said she was in good health, and asked for an appeal to be made  to the authorities here in Colombia to take measures to enable her to be released and return to Colombia.”

Speaking about the state of health of his sister, based on the most recent information he had been able to acquire through the Red Cross, Edgar Narváez told ACN that his sister is well, although the freeing in October last year of her fellow hostage, the French doctor Sophie Petronin, with whom she had shared her captivity, had affected her greatly. “Their separation caused great psychological and mental hardship to my sister, because they had shared four years of friendship. They got on very well together and were very good friends…”, he told ACN.

Edgar Narváez explained that the two women had spent most of their time together in the jihadists’ camp. “They were together for four years, they lived together, ate together, slept in the same tent. They were guarded, but enjoyed a degree of freedom. Up to a point, they were able to go outside and count the stars, the pebbles and the animals passing by, in order to kill time, because they had nothing else to do. They were given breakfast lunch and tea, there were medicines and a doctor, and they were treated well because they were women, and on account of my sister’s religious habit they showed her great respect.”

Following the release of Sophie Petronin, “they transferred her to the group mentioned in her letter, the GSIM, in a still more remote place. But little by little she recovered mentally, and now she is well again,” her brother adds. “She is exhausted physically, very thin, her face burnt brown by the sun and by the climate in the Mali region, but thanks be to God she is well. She is very strong.”

Unfortunately, however, an international mission headed by Colombia, which had travelled to Africa with the aim of securing her release, was suspended in June. “They went out in March and came back three months later, although the intention had been to remain until August 2021,” a disappointed Edgar Narváez explained to ACN International. The rescue mission was suspended due to the worsening situation after the coup in Mali. But Edgar Narváez admitted to ACN that he is “a little saddened and disconcerted” by this news, because “the Colombian group that went to find her has returned, and my sister is still alone… Although we hope they can return to Mali soon.”

Securing her release is what he wants more than anything else in the world: “That is what we all want. That is what my mother longed for – to see her free and to die in peace. But it was not to be…”