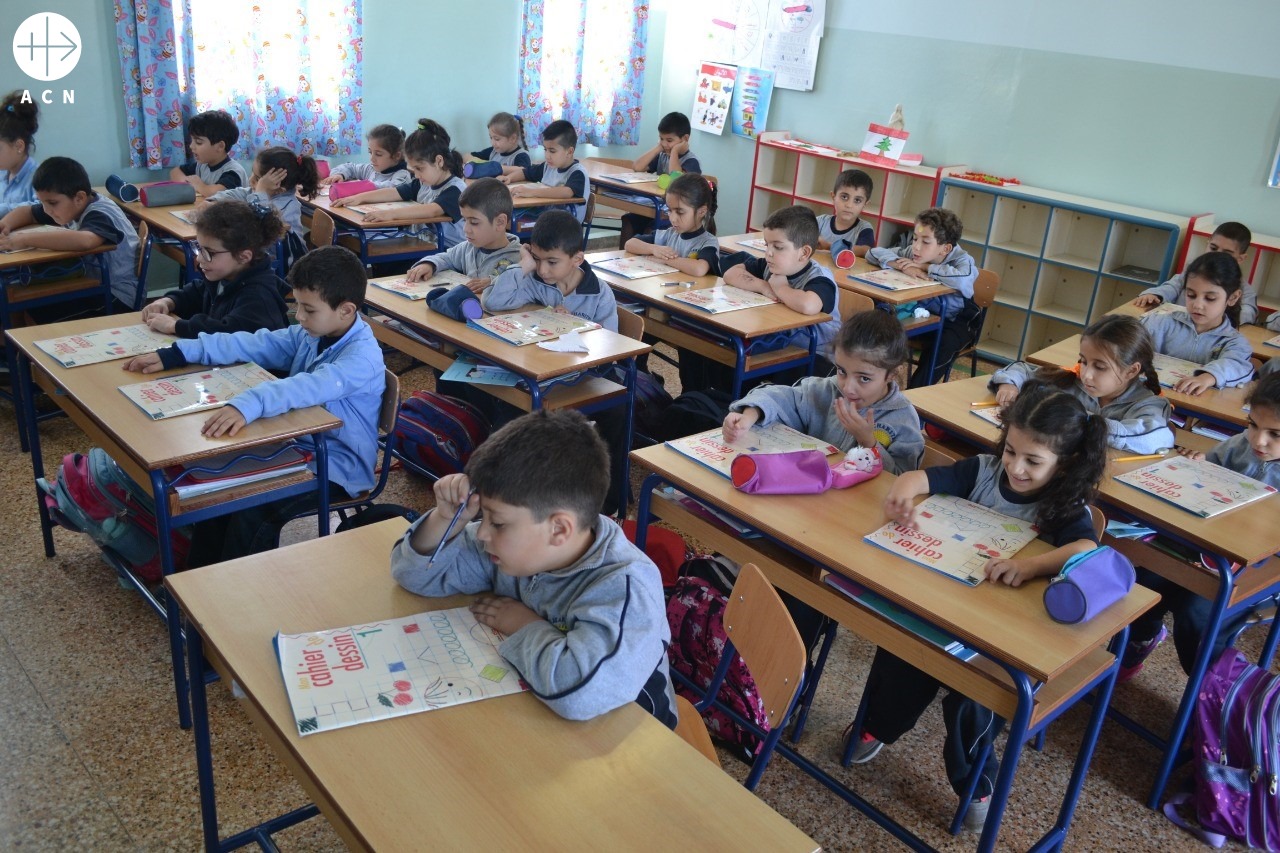 Teachers in Lebanon recognise that education is not a job, but a mission. But this mission is getting more and more difficult to achieve as the country continues in its downward spiral of economic crisis.

Jessi Abi Khalil Msanne lives around 20 km from the Saints Coeurs Ain Najm school of which she is now the headmistress, in Mansourieh. Just driving that distance to get to school costs her, per day, the equivalent of about a month’s salary in Lebanese pounds.

This fact sums up the terrible crisis that the school system is facing in Lebanon, as the country heads into another year with no President, and no working government capable of instituting the necessary reforms to ensure a bailout that could mean the end of a downward spiral of economic disaster that has gripped it for years.

“I am married, I have three kids. If I am only a teacher, nowadays, I cannot give them what they need. I need to juggle more jobs to provide for them. This takes time from me, so that I cannot prepare my classes as much as I used to”, Jessi explains, during an online conference organised by pontifical charity Aid to the Church in Need (ACN).

Jessi’s task is aggravated by the fact that students now need more attention, since the crisis and its effects on the family are leaving them with psychological problems. Despite the limits, such as insufficient funds for extracurricular activities, and power-shortages that mean lights and heating go off at around 14h30 every day, teachers do what they can. “It is a survival situation. It’s not about prosperity or growth, it is survival. We are barely surviving here in Lebanon. Education has never been a job for us, always a mission. But now it is very difficult to proceed with this mission.”

Faced with these difficulties, and often unable to provide for their own families, teachers are leaving in droves, either to the West or to the Gulf countries. Those who stay either cannot leave or feel they do not want to abandon their homeland. Robert Keyrouz has two children enrolled at Saint Coeurs Ain Naim and considers himself part of the latter group. “I have two opportunities to move to Dubai and Abu Dhabi, but that would mean having my children grow apart from their Catholic education. I also have a French passport, but I didn’t leave Lebanon, even with the crisis, because we love Lebanon, and we want to stay in Lebanon. We need to help each other. This is what Jesus has taught us”, he explains during the ACN conference.

As a PHD holder and a university professor, Robert used to earn the equivalent of about 3,500 dollars a month. Now, with the devaluation of the Lebanese pound, his salary is worth about 150. “If people like me are struggling, how about somebody with a lower salary? It is a catastrophic situation.”

The 320 Catholic schools in Lebanon provide high quality education to approximately 200,000 students. Ninety of these schools are supposedly co-funded by the state, but the Government stopped paying its share in 2017. Currently the schools survive only thanks to support from organisations like Aid to the Church in Need, that provide tuition fees and subsidies for teachers, as well as paying for books and materials and helping schools install solar panels, so as not to be dependent on fuel.

Fr. Youssef Nasr, a member of the Basilian order, is general secretary of the Association of Catholic Schools in Lebanon and explains that the Church sees this mission as more than merely educational, or an opportunity to impart Christian values to students. It is a matter of the survival of many Christian communities in the country. “Christians and Muslims live together everywhere. If our schools close, the demography will change, because Christians will leave their villages to look for schools for their children. Our schools are important to keep Christians in their villages, where they are living now. This is a part of our mission to maintain Christians in their homelands.”

He goes even further, however, saying that the fragile peace that exists in the country is very much indebted to the mission these schools continue to carry out. “Around 30% of our students are Muslim. We have our identity, our values, we are attached to them, but we are open to all the Lebanese society, without discrimination. At the same time, our schools are a space for living dialogue with the rest of the community, and to realise that we can live together without problems. Our problems perhaps come from the leaders who are running the country, but there is no problem among the people. Our schools are proof of that. We can all be citizens of a united country”.

ACN has committed to helping Catholic schools in Lebanon, as part of its ongoing effort to help offset the effects of the economic crisis and ensure that the Christian presence in the country persists, for the benefit of the entire Middle East.

“Without ACN we would be obliged to close our schools, especially the small schools in the villages. ACN is doing a good job, and helping more than 150 schools in Lebanon, and they are concentrating on the poor schools, and those in the peripheries. I want to thank everyone in ACN, all the benefactors, we count on you and without you we cannot continue, because we cannot support the poor without you. We have a difficult task ahead, and we need your help to continue our mission”, says Fr. Youssef.

“Despite the crisis, we don’t lose hope”, he insists, “we count on God, and we know very well that God will not leave us, we will overcome the crisis because we believe it is our mission, and we are not alone. God is with us, and you are with us, and in the end we will be stronger and will continue our mission.”

Featured Image: Children in Lebanon. Copyright: Aid to the Church in Need.