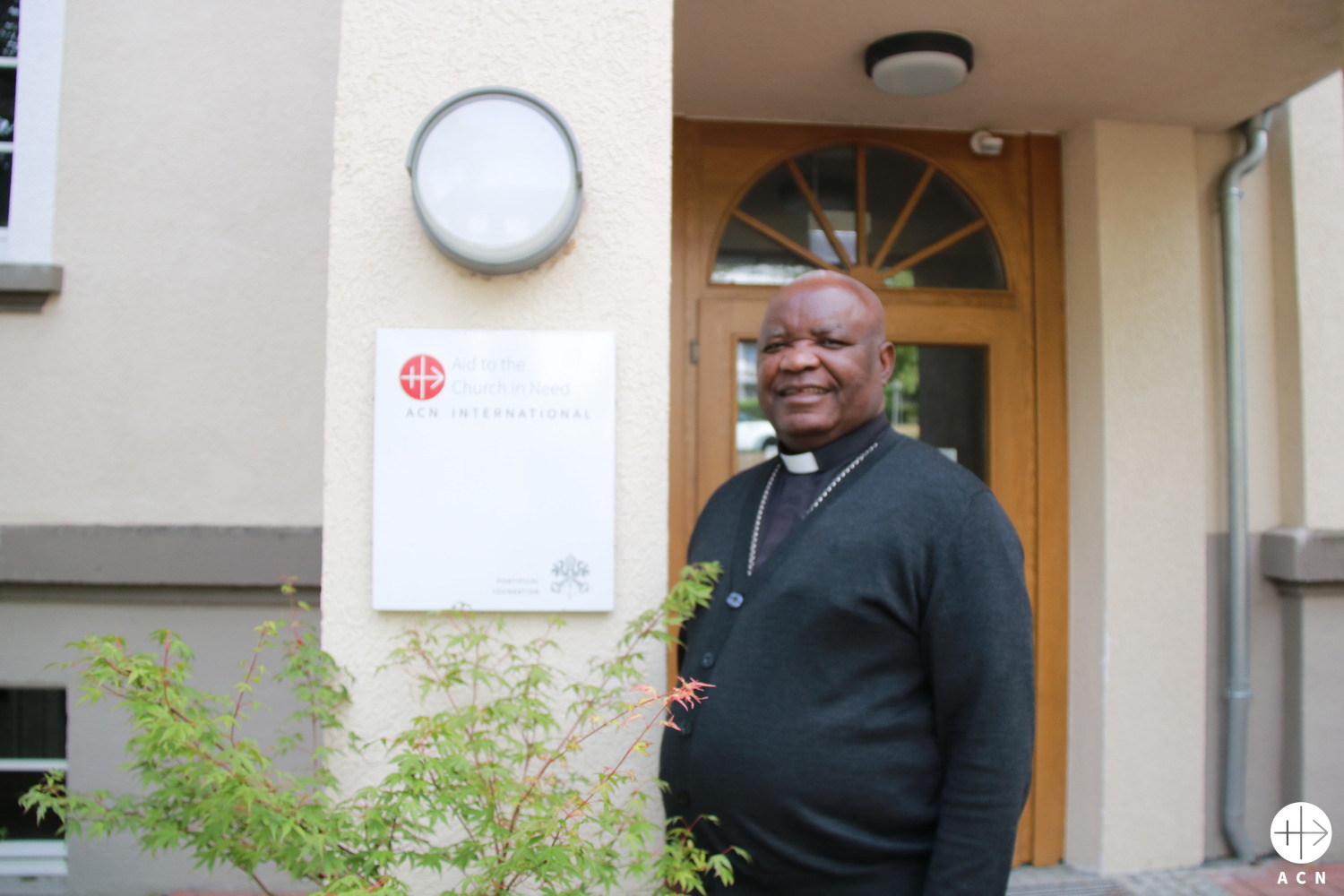 Malawi: "We want to reach out to every single person in the diocese"

During a visit to the headquarters of pontifical charity ACN, Bishop Martin Mtumbuka, of the Diocese of Karonga, in Malawi, highlights the vibrancy of the African Church, and speaks about both the success stories and the struggles of the young diocese.

Located in the north of Malawi, with the great Lake Malawi to the east and mountains to the west, the Diocese of Karonga was created in 2010. Its 24 priests – 17 diocesan and seven religious – care for more than 60,000 Catholics in a territory of about 12,000 km2, bigger than Lebanon, Kosovo, or Jamaica.

Bishop Martin Mtumbuka’s main concern in this huge area is evangelisation, which remains very important for the whole region. “We should ensure that people are not looking for us, but that we are looking for them. We should try to be as close to them as possible”, he says.

The people will not share their troubles and worries with someone they barely know, he explains, which means the proximity of priests to their parishioners is key. That is why, despite their scarcity, each priest tries to visit everyone in his parishes at least once a year and the diocese’s strategic plan calls for the constant presence of a priest within at least 20 km of every single parish in Karonga.

But distances are not the only problem, hills and mountains make up most of the diocese. It is difficult for the elderly to climb the hills and go to church, and sick people also need to receive the sacraments, so the priest has to reach them. However, the roads in the mountains and the rural districts are very bad and cars are not always the best option, especially during the rainy season.

“The road is so bad that in some cases priests have got stuck and had to spend the night out in the open. Nonetheless, we need to do everything possible to reach our parishioners: if we didn’t reach you by road or by car, we’ll reach you by motorcycle; if not, by bicycle; if not, walking; if not, by radio. That no one may blame us for not having brought the message of Christ to him. We should be able to say we went to every village.”

To help make this possible, and following a request by Bishop Martin, ACN helped fund the purchase of nine motorcycles to help with pastoral work.

Improved transport helps, but, as the bishop explains, radio remains the most powerful tool for the catechetical effort in Africa. Tuntufye FM Radio was created in 2014, with the support of ACN. The official language used in the Diocese is Tumbuka, but the local people also use Lambya, Ndali, Nyakyusa, Ngonde, as well as several dialects. Priests try to use the language of the local community, and the radio broadcasts in the three major languages of the diocese.

Use of mobile phones and the internet is extremely rare, but that is no obstacle to creativity. For example, one of the missionaries, Father Federico, always takes a mobile phone with him when he goes to a remote village to meet the chief. At the end of the meeting, he gives him the phone and, from that day on, he sends a daily message with a biblical verse to each of the chiefs he met, who then share it with the whole village.

The faith of the people is deep and vibrant. Even if the priest can’t be present, in some places the local people gather for prayer by themselves. Each parish has between 15 and 60 small churches or chapels. “When such a small community doesn’t have a place to gather, they build the church themselves” explains Bishop Martin. The people contribute cement and bricks, and pitch in as they can with the construction, but not being professionals, after a short time many of the buildings collapse. To reduce problems, the diocese is adopting a unified approach, with standards, to build churches and other parish infrastructure.

The large distances and shortage of priests and Church structures demand full participation of the laity in the ministry. Bishop Mtumbuka believes that “you can’t just give everything to the priest. For example, not every funeral can be presided over by a priest, it is not possible in our situation. So, the responsible lay people were trained as funeral ministers. The idea is that lay people can fulfil all those responsibilities which the Church allows for. We need to make sure that people receive very strong training in catechesis. We want to have as many agents of evangelisation as possible”.

There is a long way to go, but in the 12 years since it was created there has been a significant growth of parishes, from five to 16, and many young priests have joined the diocese, which currently boasts 28 seminarians. Some priests are studying abroad to be future educators and teachers.

The diocese has also benefitted from the generosity of ACN’s benefactors, who have made it possible to complete more than 100 different types of projects, totalling almost 1.5 million euros, including the construction of 25 buildings, 12 of which are churches.

Now, however, the Karonga Diocese is facing a new challenge. Being a rural area, people used to contribute to the maintenance of the clergy with produce, rather than with monetary collections. Because of the Russian invasion of Ukraine, however, food prices have doubled, whereas fuel has tripled. Fertilizers, which usually come from Ukraine and Russia, are now inaccessible.

The war has also affected the activity of the local Church: “Cooking oil used to cost around one or two thousand kwachas [between one and two euros, more or less], now it costs nine thousand. The people can’t afford it! And this leads to another problem: very soon the priests will no longer be supported by their people”, warns Bishop Martin.

Bishop Martin Mtumbuka concludes his conversation with a message for ACN benefactors: “We are a young diocese, and we are very grateful. We are trying to do everything possible for the salvation of souls and the glory of God. It is an honour to work together with those who help the Church in need. We don’t want the generosity of the people who support us to be in vain, so we are trying to do our best. And I would like to assure you that we pray for them. God bless you all!”

Featured Image: Bishop Martin Anwel Mtumbuka (from Malawi during his visit to ACN International in Germany in July 2022. Copyright: Aid to the Church in Need.