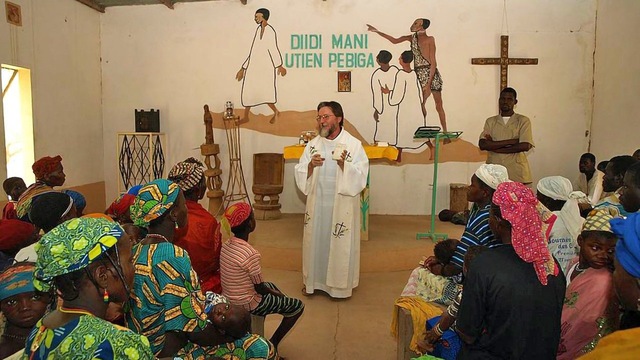 MALI : The blessing of the great silence

After two years living as a captive in the desert, somewhere between Niger and Mali, the Italian missionary Father Pierluigi Maccalli , who was received by the Pope on 9 November 2020, recalled his first impressions in an interview conducted by the SMA Media Center a few hours after his liberation. Aid to the Church in Need summaries his impressive testimony given to the Society of African Missions (SMA) on 10 October 2020.

"I find it hard to speak because after spending such a long time in silence I now find myself in this world of quickly moving events and words." These were Father Maccalli's first words after liberation, which he experienced with great joy and emotion but also as a moment of confusion.

It all began on 17 September 2018. "It had been a quiet Monday. I had celebrated the Eucharist and eaten my evening meal. I had retired, as I usually do, to prepare the morning Mass. When I heard a noise, I thought it was perhaps someone coming looking for medicines at the medical store I had established. Going out, I found myself face to face with men armed with guns, who tied my hands behind my back. I thought at first they were robbers. I gave them the money I had with me and thought things would end there. Everything happened very quickly; I was surprised and unprepared for what was about to happen to me."

During his captivity, his abductors treated him well for the most part. "Let’s say that they never hurt me or beat me. Sure, there were some pretty hurtful words. I was even preparing to die, but I noticed that they treated me with respect. They called me 'the old man' and their idea seemed to be to convert me to Islam. I felt psychological pressure, but not physical mistreatment."

The Italian missionary, a member of the Society of African Missions, speaks about the difficult moments, especially those long marches, for days and nights through the vast desert, alongside the Niger River. During that time Father Maccalli felt a great sense of anguish, a great solitude in the face of such immensity. "Where are we going? Where are we? I wept at those times; I was completely lost. I said Lord, where are you? (He weeps). But I was never afraid. Thanks be to God, I never felt abandoned. Certainly, I cried out to God, got angry with him, but I always felt he was there. It was the sole presence that sustained me."

The days were monotonous, and time dragged. "As soon as they removed my chains in the morning, I prayed the Rosary, as we walked along, with some beads I had made for myself with a little piece of string. I did a little cooking. Later on, I was with another hostage. They also had a little radio set.”

In the evening of 6 October 2020, a man arrived in a car, crying out, "'Freedom!' We set out on 8 October after Muslim prayers. We met up with the French hostage Sophie Petronin and Mr Soumaila Cissé, a Malian politician."

The hostages were then taken by car and then by plane to Bamako airport. There they met with the new transitional president, Mr Bah N'Daw. Father Maccalli gave thanks to God and to the officials who were present. Then, on the evening of 8 October, the former hostages were put on a plane to Rome and were finally able to meet up with their families. Father Maccalli was able to celebrate Holy Mass after a very long time: "So two years of waiting had finally come to an end. At last!"

"I heard so many people telling me ‘We never gave up on you.' I was never alone, even though at times I did feel alone, but the Lord was with me, with us all. I thought at first I would be set free within three months, then perhaps six months, but a year went by, a year and a half, and then two years. It was too much, all that time. I knew that there were other hostages, including a Romanian who had been there for six years! How can you hold out that long? Thank God, it’s all over for me, quickly over. Now I’m with you all again. I haven’t the words to thank everyone!"

The great silence was an experience that has deeply marked Father Pierluigi. "I experienced some beautiful things because I was in a great silence. After so many years proclaiming the Word, I had to be quiet and enter into the silence of God. I realised that this was perhaps my mission. It truly was the silence of the desert. There is no music except the music of the wind blowing. That was truly a positive time. Because in the silence you hear other things. My companions were the stars, so beautiful so brilliant. In the morning I had to battle with the sun, which was extremely hot; with the heat and the thirst, and yes, I suffered. But the great silence was also a blessing. You find yourself experiencing an inner journey that takes you far and deep."

Father Maccalli feels particularly for the women who are still being held hostage. They are more despised by their Muslim abductors. He thinks particularly of the Colombian religious sister Gloria Narvaez, who is starting to show signs of distress. And he also asks us to pray for peace in Africa: "I have lived for 21 years in Africa. Africa is beautiful, strong, a place of exchange and sharing. But it is also a body enchained by violence, by all these rebel movements," he says.

"Let us pray to the Lord for peace and freedom. The Pope has issued this new encyclical called Fratelli Tutti. May this universal sense of fraternity touch the heart of Africa, because that is the beauty of our mission."  And Father Pierluigi, this former hostage, concludes with a final message of peace: "I feel no bitterness towards my abductors. These young men are indoctrinated by the propaganda videos; they don’t know what they’re doing. There has to be a non-violent way to reach peace, which is the true message of the kingdom of God. We must continue to work in patience and humility, and without violence."