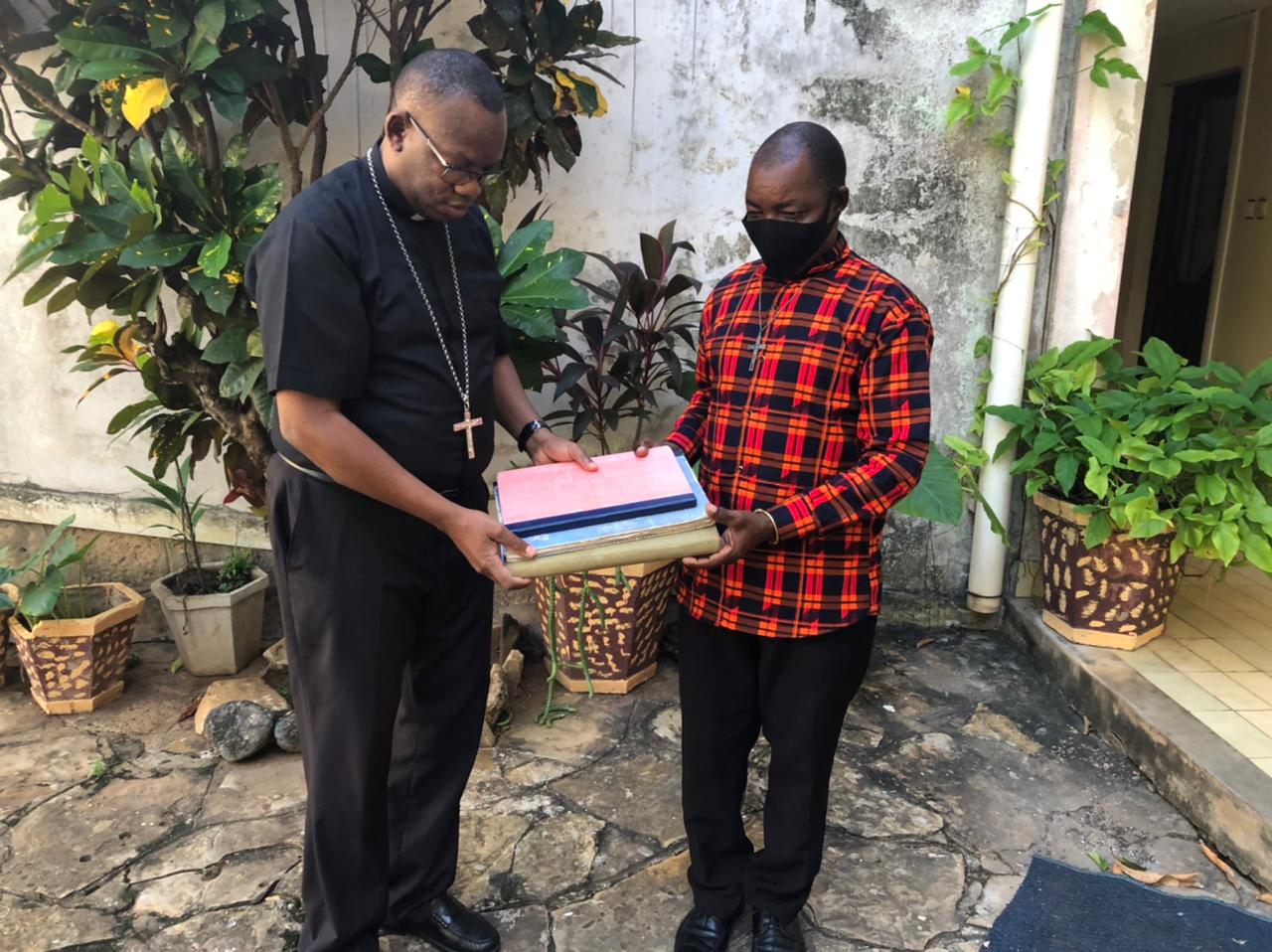 MOZAMBIQUE: catechist risks his life to save a parish “treasure” in Palma during the terrorist attack

Today ACN is able to tell the inspiring story of this courageous Mozambican catechist.

“I am the catechist and animator of the parish of Saint Benedict in Palma” explains Paulo Agostinho Matica and with these words he hands over to Bishop Antonio Juliasse, the Apostolic Administrator of Pemba, the parish registers of his home parish in Palma. On March 24, when the town was attacked by terrorists, Paulo Agostinho lay low in hiding, guarding the parish documents as a precious treasure.

“On the day of the attacks, I was working in the parish. I was inside, in the presbytery… It would have been around two in the afternoon when the insurgents of Al Shabaab arrived and began to attack the parish of Palma.” As soon as he heard the shooting start and the first bombs exploding, the catechist rushed to save the parish registers, which contain all the marriages and baptisms of the parish, the historical memory of the Catholic community in Palma.

For two days, with the city occupied by the terrorists, people fleeing and gunshots and explosions everywhere, Paulo Agostinho remained hidden inside the parish house. On the third day, he decided to risk it and made his way to the house of a friend. From there he travelled onto Quitunda, a small town on the outskirts of the city of Palma, which has recently become the centre of a major natural gas exploitation project.

From Quitunda the catechist made his way to Senga, taking with him the precious books – the “treasure” of the parish, in his eyes. He arrived on the eve of Palm Sunday. The whole region was like a war zone. The terrorists, who claim to belong to Daesh, or Islamic State, were conducting one of the most brazen attacks to date in the province of Cabo Delgado, and stories were circulating of people in Palma murdered and beheaded and hundreds of people fleeing the city, and everything in a state of chaos and panic.

When he arrived in Senga, the catechist found a small Catholic community. In the midst of the climate of war, with the people not knowing what to do or where to flee, his presence soon became known to some of the Catholics there. They told him, “We would like to pray” and "so I went to the church and we prayed together.” In the Cabo Delgado region, where there are few priests, it is common for the catechists to lead the Liturgies of the Word. And that is how the Catholics of Senga celebrated Palm Sunday together.

But Paulo still felt the need to find a safer place, so as not to lose the precious parish registers. And so, he went on to Mwagaza, another nearby village where he had some relatives. “I stayed there until 11 April,” he says. Then, hearing news that the attack on Palma was over, Paulo decided to return, in spite of all the risks. He didn’t know what to expect, he didn’t know who he might meet on the road. “I went back to the parish to see how things were,” he reports.

What he in fact found moved him and saddened him deeply. The church had been ransacked and there were signs of destruction everywhere. The door had been smashed, the terrorists had set fire to many things, to the sacred images and statues, to some of the benches, the loudspeakers, even to some new windows that they were going to replace the old ones with… Everything had been destroyed. Inside the parish house, Paulo Matica had been safeguarding around 30,000 meticales (around 400 Euros) for the parish expenses. Everything had gone: “They took the money, a plasma TV, and even the motorcycle…”

Two months and 11 days after the terrorist attack on Palma the catechist made the journey to Pemba in order to entrust the parish registers to his bishop. In a brief ceremony, which ACN was able to video, Bishop Juliasse, the Apostolic Administrator of the diocese, praised his courage and determination. “I had already heard of the dedication of this catechist of ours in the parish of Saint Benedict in Palma, but I’m filled with admiration for the fact that he also made the effort to save the parish registers,” he commented.

Bishop Juliasse emphasised the courage Paulo had shown in risking his own life to salvage these records “at such a difficult moment of attacks, shooting, killing and fleeing.” And he commended his witness of love for the Church. “In the midst of all suffering, we have this witness of love for the Church of God, a Church that Paulo loves and cares about,” he concluded.

This courage on the part of Paulo Agostinho Matica enabled him to save the parish registers for the community of Saint Benedict in Palma. But in reality, these are more than simple books. In these handwritten pages are contained the records of the entire Christian community, the names of those who married in this church and those who were baptised and confirmed there. But for the courage of this one man, the parish registers would have served only to feed the bonfires of hatred lit by the terrorists on the floor of the church. Instead, they are now part of the historical legacy of the diocese.

Featured Image: Catechist risks his life to save “treasure” of Palma Parish during a terrorist attack in Mozambique. Photographer: Fr. Kwiriwi Fonseca. Copyright: Aid to the Church in Need.