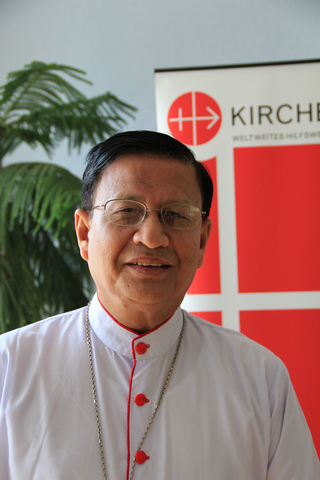 Myanmar: “We have shed enough blood”

Following the military coup in Myanmar, the Bishop’s Conference of the country has addressed an appeal for peace to the conflicting parties and the international community. “We are journeying through most challenging times of our history,” the bishops wrote in a joint statement on 4 February, which was sent to the international pontifical foundation Aid to the Church in Need (ACN). The statement was signed by the chair of the Bishops’ Conference, Cardinal Charles Maung Bo, Archbishop of Yangon (Rangun), and the General Secretary of the Bishops’ Conference, Bishop John Saw Yaw Han, Auxiliary Bishop of Yangon.

The bishops call upon the people of Myanmar to remain calm in spite of “the unexpected, shocking events” and to refrain from resorting to violence. “We have shed enough blood.” They remind the people that there are also non-violent forms of protest. The Conference implores physicians and health care providers, who have gone on strike to protest at the actions of the military, “We are living through a time of pandemic (…) Do not abandon your people in need at this time!”

In their statement, the bishops ask the military, which is called Tatmadaw in Myanmar, what went wrong over the past few years as the country underwent democratisation. “Was there a lack of dialogue between the elected civilian authorities and the Tatmadaw?” The allegations of voting irregularities during the parliamentary elections in November which were raised by the military could have been resolved “by dialogue in the presence of neutral observers.”

“Now you promise greater democracy – after investigation and another election. Myanmar people are tired of empty promises,” the Bishops’ Conference expresses scepticism and asks how the military is planning to gain the trust of the people. The Bishops’ Conference believes that an important step in this direction would be the release of members of the former government party NLD (National League for Democracy) and other prisoners. “You promise democracy; start by releasing them. The world will understand you.”

The bishops include a personal statement to the former head of the civilian authority and winner of the Nobel Peace Prize Aung San Suu Kyi, who was also incarcerated by the military and is now facing charges of economic crimes. “You will always be the voice of our people. (…) You are Amay Suu [Mother Suu] to the nation. Truth will prevail.” At the same time, the Bishops’ Conference emphasizes that “this incident takes place due to lack of dialogue and communication and lack of acceptance of one another. Please listen to others.”

Warnings about sanctions from abroad:

Finally, the bishops direct an appeal to the international community, whom it thanks for its concern in response to recent events. However, they also include cautionary words to prevent premature reactions. “Sanctions and condemnations brought few results, rather they closed doors and shut out dialogue.” Economic sanctions would “throw millions into poverty.” The bishops explain that other countries need to understand the special situation and history of Myanmar. “Engaging the actors in reconciliation is the only path,” the bishops declared. “Peace is possible. Peace is the only way. Democracy is the only light to that path.”

On the night of 1 February, the military of what was formerly known as Burma retook power by coup, ending a ten-year period during which democratic reforms were introduced. The military claims that the coup was carried out because of allegations of voting irregularities during the parliamentary elections in November. Aung San Suu Kyi won the elections with a strong majority. According to election observers, the evidence does not support the allegations of the military. The armed forces have declared a state of emergency in the Southeast Asian country for a period of one year. This is to be followed by elections. However, observers are sceptical that this will happen. The US and Europe have threatened to impose sanctions against the country.

According to the Religious Freedom in the World report published by ACN, about 8 per cent of the 54 million inhabitants of Myanmar belong to Christian denominations; Catholics make up one to two per cent of the population. Christians frequently experience discrimination at the hands of radical Buddhists, particularly because many Christians belong to ethnic minorities.