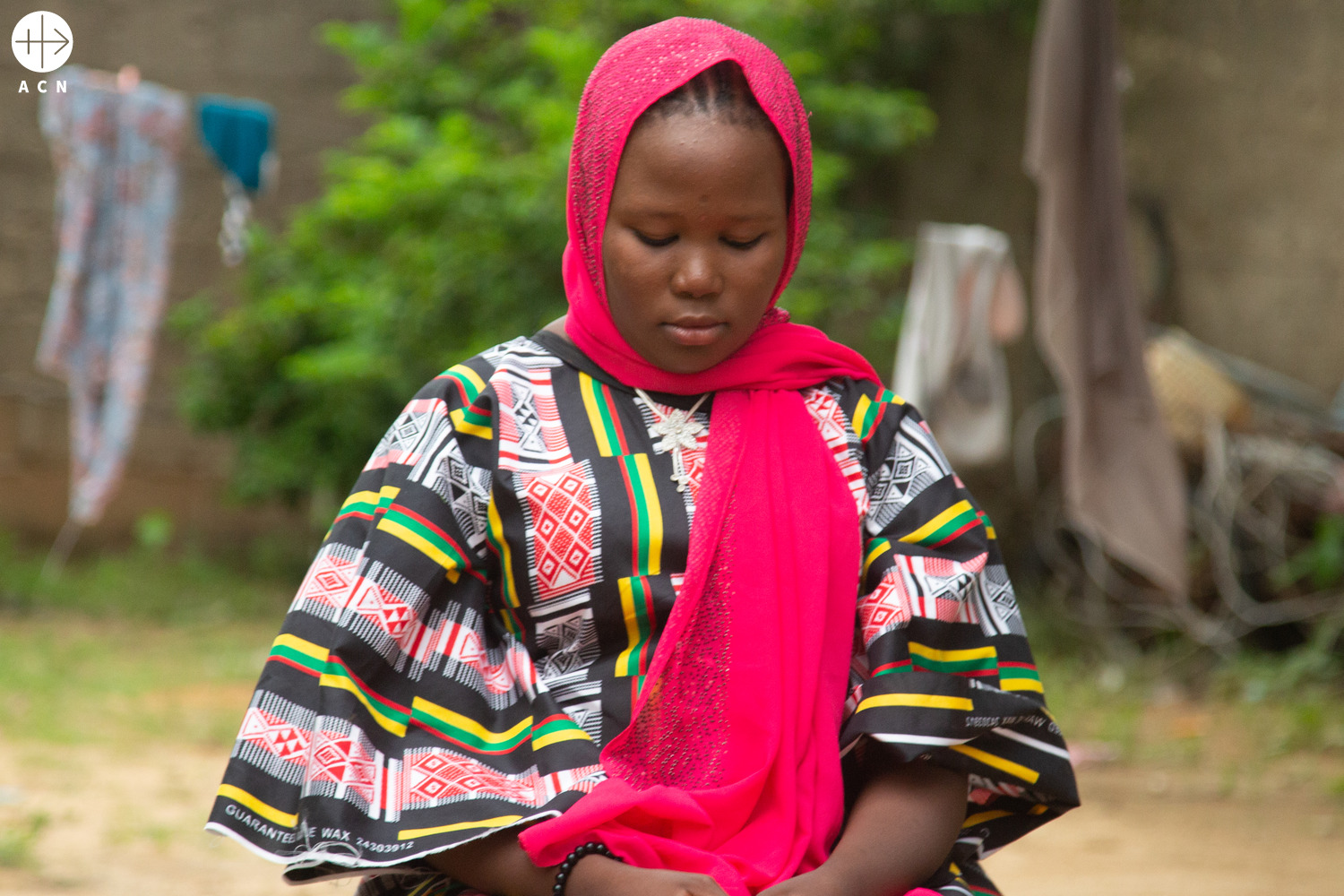 Nine years in the hands of Boko Haram:“Words cannot do justice for what I suffered”

Two months ago, Maryamu Joseph (16) escaped from Boko Haram after being held for nine years.

Along with 21 others, she was abducted in 2014 at the age of seven when the terror group attacked her community of Bazza and took her to a camp. Two of her siblings were later taken to the same camp, where one was killed and the other remains in captivity. In an interview conducted by Patience Ibile in her native Hausa language, Maryamu spoke to the pontifical foundation Aid to the Church in Need (ACN) about her ordeal and the help at the Trauma Centre built with the financial support of ACN.

How would you describe what you went through?
Nine years of living in bondage! Nine years of torture! Nine years of agony! We suffered so much at the hands of these heartless, ruthless people. For nine years we saw the shedding of the innocent blood of my fellow Christians, killed by people who do not value life. They murdered without remorse like it’s a normal thing to do. These nine wasted years in the Sambisa forest cannot be forgotten in a blink of an eye. Words cannot do justice to what I’ve gone through.

When and how were you captured?
Boko Haram attacked my community in February 2013. After a killing spree that left countless dead, they took 22 of us into a thick forest, we trekked for 22 days before arriving at our destination. They put the Christians in cages, like animals. The first thing they did was forcefully convert us to Islam. They changed my name to Aisha, a Muslim name, and warned us not to pray as Christians, or we would be killed. When I turned 10, they wanted to marry me to one of their bosses, but I refused. As punishment, they locked me in a cage for an entire year. They brought food once a day and pushed it under the door without ever opening the cage.

In November 2019, they captured two of my siblings and brought them to the camp. Only God knows how I felt when I saw them. I was full of intense anger, I felt like picking up a machete and butchering them one by one. Right before my eyes, they took one of my siblings and killed him. They cut off his head, then his hands, legs, and stomach. They treated my brother's body just like a chicken before it is cooked. I was devastated. I said to myself, ‘Who’s next?’. A few days later I started having nightmares, I started hallucinating. I saw people and heard voices that I don’t even know. Sometimes armed people came close to me, to hurt me. When I screamed, I would feel a hand on my shoulder, and one of my fellows would say: “Calm down! Breathe! You will be fine.” That was when I realized it was just a dream.

You were held captive for nine years. How did you manage to escape?
On 8 July 2022, at around 1 .00 a.m., the camp was quiet, and everybody was asleep except my fellow hut members and I. The twelve of us decided to run away. At first, I was confused whether to stay because of my younger sister, who was in another hut, but I figured I could spend the rest of my life in this camp, so I had to leave, no matter what. We snuck out of the camp and ran through the thick forest. We kept going as long as our legs would carry us, for two days, until we finally arrived in Maiduguri on 10 July 2022. When we arrived, I fainted, and when I woke up I was in the arms of a good Samaritan. He gave us water and food to recover our strength and later I came to the Church-run camp.

What has your experience at the Trauma Centre been like?
The first thing they did was to pray for me and encourage me to come back to my faith. I am happy to return to Christianity. Since I returned to Maiduguri the pain has decreased. I am hoping that, with time, God will help me overcome my bitterness and embrace peace, though I do not see that happening any time soon. I still feel that pain echoing in my ears. I still have nightmares, though not as bad as before. Thanks to the Trauma Centre I no longer hallucinate.

I believe I have learned how to adapt to the outside world, and how to talk to people. I am beginning to relate to my counsellors in a very friendly manner, not in an aggressive way as was the case at the beginning of my healing process.

In terms of working skills, I want to learn how to make beautiful dresses, shoes, and bags.

Has your suffering brought you closer to God?
What I went through drew me far away from God. I find it so difficult to come back to God. I find it hard to trust Him. I am trying to tell myself that He is still God, but it is not sinking in. I felt abandoned by God because of what I went through. They say that God is all-powerful and that He is not a partial God. Then why did He not help me when I needed Him the most?

Has all this challenged your faith?
Yes, but it’s getting better by the day. Coming back to Christianity after nine years of practicing Islam involves a lot of hard work. It looks almost impossible at first. My mind is still heavy, full of anger, bitterness, and anguish. The pain comes and goes. One minute I am happy, the next minute the sorrow returns.

Do you think you can forgive those who hurt you and your loved ones?

Forgive those heartless beings? I don’t think I am able to forgive them. I need time to digest all that has happened to me then maybe, just maybe, we can then talk about forgiveness. But today, no, I cannot forgive them.

What are your hopes for the future?
At the moment I am not thinking about that. I just want to be me again. I want to be set free from the pain and anguish I am feeling. But soon I would like to get an education, go to school, learn how to make friends, and how to speak and express myself in English.

I would like to study law to defend the defenseless. I am calling on anyone touched by God to help me. My life doesn’t feel fully and truly safe, I need to leave this environment and start afresh. I would be happiest if I could get a scholarship to go to school. I am just thinking aloud, but I would be super excited if my wish was granted.

The Maiduguri Diocese Trauma Centre in Maiduguri was built with the financial assistance of Aid to the Church in Need. Aimed at helping people who have suffered various forms of violence at the hands of Boko Haram, the centre will be officially opened in November, but it has already helped more than 20 people overcome severe cases of trauma, and post-traumatic stress, as well as offering counselling and vocational training to victims. The centre already employs a team of 24 people who work on counselling and social integration, but there are plans for another 20 staff members. At its peak capacity, the Trauma Centre will be able to cater for 40 victims at a time.

Featured Image: Maryamu Joseph (16), who escaped from Boko Haram after being held for nine years. Copyright: Aid to the Church in Need.