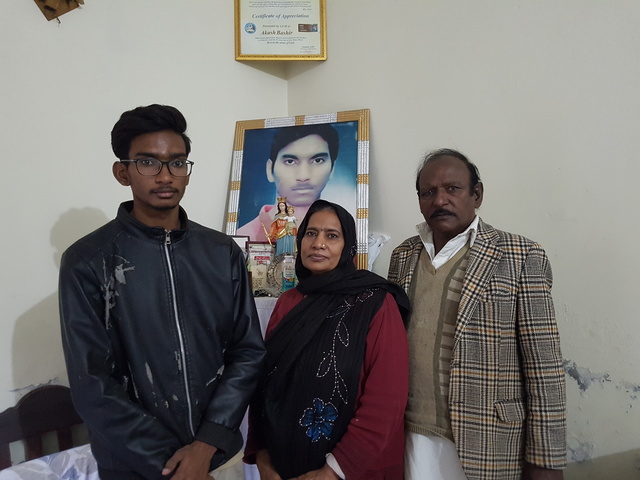 Naz Bano has been praying since 2016 for momentum in the movement to seek sainthood for her 20-year-old son, Akash Bashir, who was killed while preventing a suicide bomber from entering the crowded St. John’s Catholic Church.

At least 20 people died and 80 were injured in twin suicide blasts targeting services at two churches on March 15 2015, in Youhanabad, the Christian quarter of Lahore, the capital of Pakistan’s Punjab province. Father Francis Gulzar, the vicar general of the Lahore Archdiocese, announced the beginning of the process to seek sainthood for Akash on the first anniversary of the terrorist attack. Akash’s mother told the pontifical foundation Aid to the Church in Need (ACN) about her grief.

“We moved to Youhanabad in 2008. In November 2014, Akash joined the team of volunteer security guards of our church. All denominations were recruiting youth following the 2013 suicide bomb attack at All Saints Church in Peshawar City, in the northern Khyber Pakhtunkhwa province.

We used to watch protestors demanding justice for the victims of the Peshawar Church bombing. Akash used to discuss it with his friends and kept insisting for three months that he wanted to guard the church. He was ready to sacrifice his life if God gave him a chance to protect others.

He died during Lent. I was washing clothes in the house when my son left to go to the church that Sunday. He was wearing all white. Moments later I heard the firing of weapons outside. Then our street thundered with explosions. I remembered women speaking of death threats received at the school of [the Anglican] Christ Church. The students used to describe getting threatening letters and shrouds in the mailbox.

The streets were filled with people. Hearing the second blast, I rushed with my youngest son towards the Catholic church. I was searching for Akash among the boys standing near the church gate. But he was lying down in the dirt. His right arm was almost ripped off. I could not believe my eyes.

Policemen on duty had been watching a World Cup cricket match. Akash was supposed to check visitors at a barrier away from the church, but he insisted on a posting at the church gate. ‘I will die but I will not let you enter the church’ were his last words to the terrorist. These words are now inscribed on banners at the annual commemoration of his death. The fifth one was cancelled this year due to the coronavirus pandemic.

The Catholic Church offered support for the families of the deceased and for the injured. Other Churches and ministries aided as well. This past April, the Pakistan Rangers, a Federal Government’s paramilitary force which is responsible for safety in dangerous areas, distributed 500 ration bags containing essential food items to needy Christians and families of bombing victims.

Arsalan, my 25-year-old son, has joined the Church security team to take the place of his brother. We did not stop him. We cannot prevent our sons from serving the Church. It is their choice. Our churches are now even more crowded on Sundays. The number of Church security volunteers has increased. The community has become closer. Clerics often visit each other’s churches as part of interfaith programs. We do not want to leave Youhanabad. We love the Christian atmosphere despite the lack of a government hospital and the absence of state-run schools.

Several nuns and our parish priest accompanied us to Akash’s grave on All Souls Day. We prayed for him in a group of 20. Family members of other bombing victims brought flowers as well. The process of his cause for sainthood has been delayed due to the pandemic. However, a Salesian priest is writing a book about him.

I have mixed feelings passing Akash’s memorial in front of St. John's Church. He was a part of my heart. But our happiness is greater than our grief. He did not die of a drug addiction or because of an accident. He was a simple boy who died in the path of the Lord and saved the priest and worshippers. People love him. Akash is already our saint.”