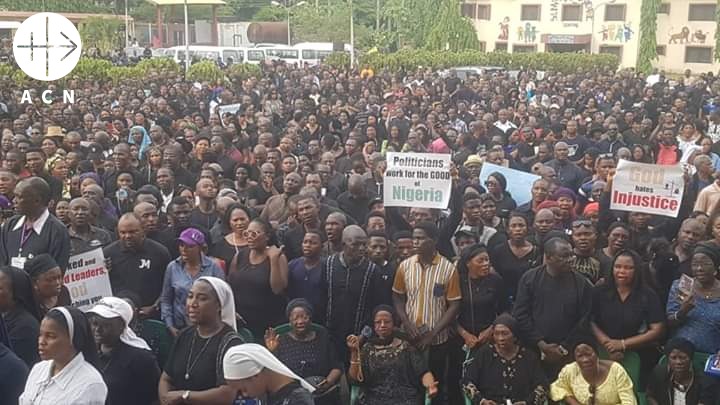 “Priests have become an endangered species in Nigeria”

Facing a wave of kidnappings, murders, and violence, Nigerian priests shun violence as an answer and call on prayer.

According to data compiled by the international pontifical charity Aid to the Church in Need (ACN), at least 18 priests have been kidnapped in Nigeria since the beginning of 2022, five in the first week of July alone. Although most were released unharmed, three were killed.

Faced with this situation, the Nigerian Diocesan Catholic Priests Association (NDCPA) has issued a statement, sent to Aid to the Church in Need (ACN), denouncing that “it is really sad that in the course of their normal pastoral activities, priests have become an endangered species. Attempts have been made at various levels to cry to the government” say the priests, “but as already observed by the Catholic Bishops Conference of Nigeria, ‘it is clear to the nation that [the Government] has failed in [its] primary duty of protecting the lives of the Nigerian citizens.’”

The priests explicitly reject any response which involves force or violence on their part, saying “we are not terrorists or a war troupe” and also question the usefulness of priests taking part in street protests, but call instead on what they say should be the first weapon of a man of God.

“Our ministerial journey consists in the proclamation of the word of God, and the celebration of the Holy Eucharist as a memorial of Christ and His mission on earth. This implies that we carry along with us the Holy Books and not weapons. Christ never encouraged us to raise arms against anybody nor take up any action in vengeance. We do not take arms, and we will not.”

The statement highlights the fundamental work that priests carry out, despite the lack of security: “Our duty is to lay before the altar of God the gratitude, cares, worries and petitions of the faithful and ours. We are advocates of pro-life and peace. We were called and sent to preach the good news to the poor, give liberty to captives, free the oppressed, heal the broken-hearted, bind up wounds, and the like. We have been fulfilling this call and we shall continue.”

For this reason, beginning Monday, 11 July, the priests call on all their brothers in the ministry to join in a week of special prayer and fasting, Eucharistic adoration, and recitation of the Rosary. According to the NDCPA, these activities are not meant to replace, but to complement other programmes dioceses have in place to curb the problem of insecurity in Nigeria. “We humbly appeal to all priests to take it very seriously without neglecting other regulations and related recommendations in their various dioceses”, says the statement, sent to ACN.

Featured Image: A peaceful protest in Abuja/Nigeria March 2020. Copyright: Aid to the Church in Need.