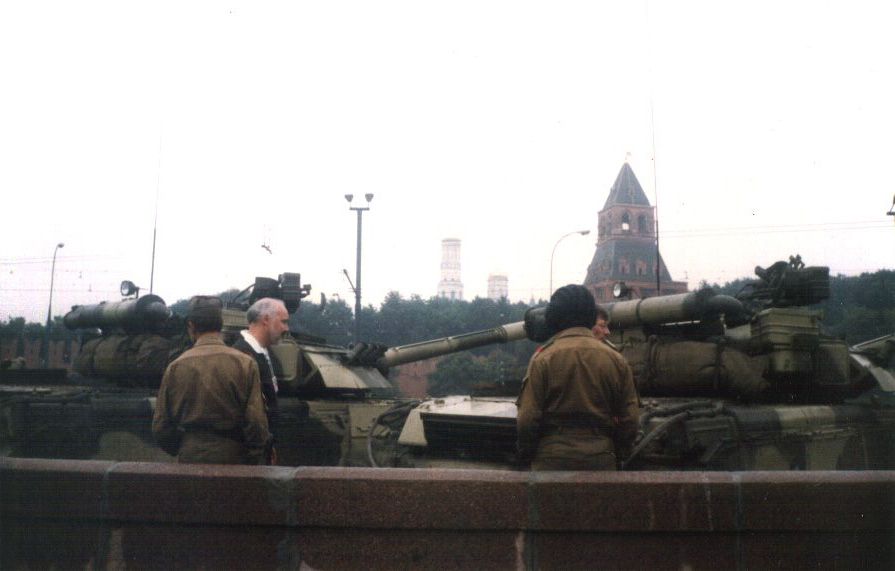 Russia: A radio transmitter smuggled by Aid to the Church in Need makes world history

19 August marks the 30th anniversary of the coup carried out by the Soviet military and Communist elites.

The images went around the world: tanks rolling through Moscow’s inner city and taking up position in front of the parliament building. The Soviet news agency TASS reporting that President of the Soviet Union Mikhail Gorbachev had been relieved from his office due to illness. The self-appointed State Committee declared the state of emergency. It was Monday, 19 August 1991, the day of the coup against Gorbachev.

While this marked the beginning of the end of Gorbachev’s political career, another person’s career was just beginning: Boris Yeltsin, at that time President of the Russian Federation. He quickly became the speaker and leader of the resistance against the communist hardliners who had staged the coup, as there was a very strong desire for reform and democracy among the people. Yeltsin grew ever more influential.

Looking back at that time, one moment, in particular, stands out: Yeltsin climbing to the top of a tank in front of the parliament building to address the people without the aid of a microphone. Following his speech, he returned to the parliament and said to the other members, “What I need now is a radio.” He wanted to reach as many people as possible. A “mouthpiece” for the democratic movement was needed, and fast. However, the media were in the hands of the military and communist hardliners.

At that moment, the solid network that the international Catholic pastoral charity Aid to the Church in Need (ACN) had built up in the Soviet Union during the Cold War gave the opponents of the coup a decisive advantage. Everyone was astonished when the Russian member of parliament Viktor Aksiutsjik announced that he had the necessary equipment to set up a radio. The parliamentarian was a member of the board of the station Radio Blagovest – in English “Good News radio.” For some time, plans had been in the making to establish a joint broadcasting station for the Catholic and Orthodox Churches in the Soviet Union with the support of ACN and a foundation based in the Netherlands. However, the Soviet Ministry of Communications had refused to grant a broadcasting license.

Undeterred, the parties had continued with their plans to set up a Christian radio station on Russian soil. By August 1991, the necessary technical equipment had long since made its way to Moscow. For quite some time, ACN project partners and employees had smuggled the broadcasting equipment, one component at a time, by ship to St Petersburg and from there on to Moscow, where the parts were then reassembled. The transmitter was ready and waiting in Moscow and only needed to be retrieved from a warehouse.

A lorry belonging to the parliament’s catering service was dispatched to the warehouse, where the transmitter was loaded onto the vehicle. To ensure that the communist hardliners would not discover the broadcasting equipment, it was hidden under lettuce, tomatoes and other foods. Once the courier had returned, engineers installed the transmitter in the parliament building and the air force provided access to an antenna.

Thanks to ACN, Boris Yeltsin now had the mouthpiece he needed to call on the people to oppose the communist coup. His appeal was heard by the people of Moscow: thousands gathered peacefully on the streets of Moscow. Even a number of military units changed over to Yeltsin’s side. By the evening of 21 August, the coup was over. Yeltsin was quick to express his thanks by granting the joint Catholic and Orthodox station “Radio Blagovest” a broadcasting license in September of 1991. The station is still in operation today.

Modern media are growing in significance, not only for preaching the Gospel, but also for carrying out the social work of the Universal Church. Since the early 1960s, ACN has been helping to fund radio and television stations by providing technical resources, audio and video productions and setting up religious news agencies. Radio stations play an important role in shaping public opinion on political issues; this is particularly the case in Asia, Eastern Europe and Latin America. In countries in which the media are censored by the political leadership or controlled by opaque economic structures, Church stations are often crucial for the preservation of democracy and freedom.

To donate to help spread Catholic media throughout the world click here.