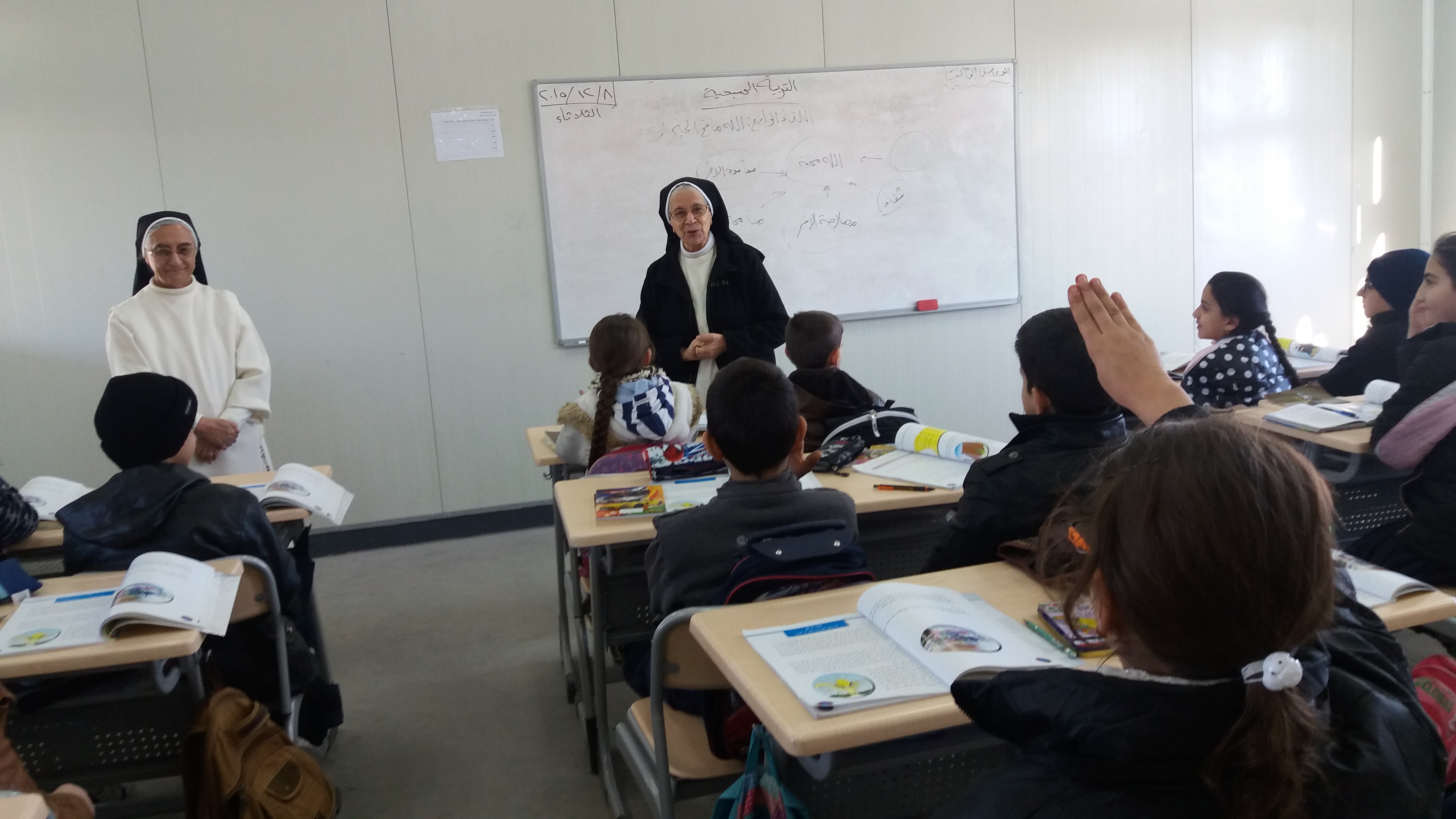 On 6 August 2014, the city of Qaraqosh fell into the hands of IS. The city is located on the Nineveh plains about 25 km outside of Mosul and was once considered the largest Christian city in the country. The Christians living in this region of Iraq were forced to flee from their homes. IS cost many people their lives, destroyed property and displaced thousands of people.

The city was liberated by the Iraqi army in 2016. Once the city had been freed, the families began to return. Now, seven years after the invasion, remarkable progress has been made in rebuilding the city.

The Church has been closely involved in this development. An expressive example can be found in the work of the Sisters of the Congregation of Saint Catherine of Siena, an order that has been very active in this region since 1890. The sisters were among the first to return following liberation and did not hesitate to commence with the rebuilding of the community. The return and presence of the religious sisters in the region encouraged many Christians to come back to their homes and revive the Christian community in the Nineveh plains.

Sister Clara Nas, the prioress of the Dominican Sisters of Saint Catherine of Siena, had scarcely returned to Qaraqosh in 2016 when she had the idea of building a new secondary school. When she told others about her dream, they thought it would not be possible: the families had just survived the horrors of IS and the suffering the group had caused. They were just beginning to return to a city that had completely been destroyed. Many considered the project of building a new secondary school outside the realm of the possible.

Sister Clara, however, refused to give up her vision. “It was our goal to offer young people a place of reconciliation and healing after being displaced by IS and living for so many years as refugees,” Sister Clara explained. And so, in 2018, she sought the support that would be needed to tackle the large project of building a new secondary school. The international Catholic pastoral charity Aid to the Church in Need (ACN) and the Federal Chancellery of the Republic of Austria agreed to collaborate.

Construction of the secondary school in Qarqush (Qaraqosh). Copyright: Aid to the Church in Need.

The news that a new secondary school was going to be built was received with great jubilation by the families living in Qaraqosh because one of the primary concerns of those who had returned or were planning to return was the education of their children.

The region’s current educational system is of very low quality. There are so many pupils that the schools work in two shifts, teaching one group of pupils early in the morning and the second group in the afternoons. Another problem is a lack of teaching materials. To make matters worse, there is a shortage of teachers, as the government has not allocated a sufficient number of teaching positions to the region to meet its needs and also does not pay salaries that would make it possible for teachers to earn a living from teaching alone.

However, there is another reason why the project has met with such great enthusiasm: the religious sisters are known and highly regarded by the locals for their many years of experience in education. Prior to the invasion of IS, the religious sisters ran the Al-Thaira primary school. They continued to carry out their mission of education as refugees in Erbil and taught the displaced children in temporary schools set up in containers. The primary school in Qaraqosh was reopened in 2017 and now has 427 pupils.

Construction of the secondary school in Qarqush (Qaraqosh) progressing. Copyright: Aid to the Church in Need.

The secondary school is expected to open its doors on 1 October for 625 pupils between the ages of 13 and 18. “As Dominican sisters, we are convinced that education illuminates the mind and opens the hearts to the truth. That is why we initiated the project for a new secondary school – in a village where young people urgently need a healthy mental environment,” Sister Clara explained.

The new three-storey school building will help the community in many ways. First of all, it strengthens the educational system in the region and frees pupils from the burden of having to attend school in two shifts. Furthermore, a sports field is planned that will be open to all young people in the community – even those who are not enrolled at the school.

In addition, the building project offers new employment opportunities within the community because locals were hired for the construction work. It is estimated that up to 200 engineers, construction workers and skilled workers were involved in the building of the new school. Once completed, it will offer jobs for teachers and other school personnel.

The religious sisters will again have a pastoral worker at the new school, just as they did at their primary school. They know that these services are a strong source of spiritual support for their pupils. The young people can make use of the school chapel, which is open to all, take part in a wide range of religious activities, hold catechism classes and prepare for their First Holy Communion.

“We are deeply grateful for your show of solidarity. We very much appreciate your moral and financial support, which is helping us to remain in our country,” Sister Clara said to ACN.

ACN is involved in many of the projects that were initiated in the region to rebuild Baghdida (Qaraqosh) and to provide the help and assistance Christian families need to return to their homes after the invasion of IS. Among other things, the pastoral charity has approved grants for the education of the children living in the Nineveh plains as well as for rebuilding six kindergartens and an orphanage.