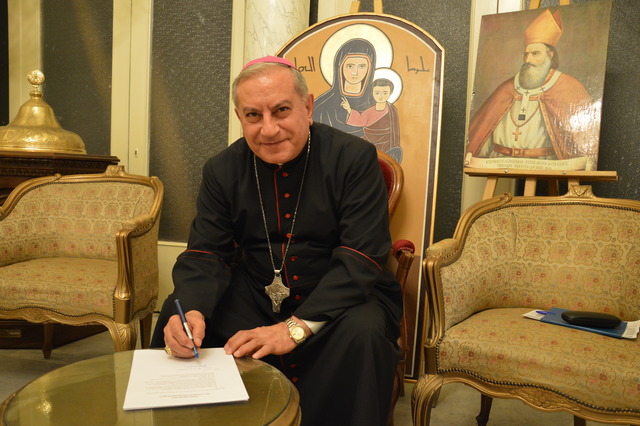 Thank you Mass in Aleppo for ACN benefactors

“Your support makes the families stay in the country,” states the Syrian Catholic Archbishop of Aleppo.

On the 20th anniversary of his Episcopal ordination, Monsignor Antoine Chahda, Syrian Catholic Archbishop of Aleppo, has invited all the heads of Churches in Aleppo to a Holy Mass for the intention of all the benefactors of Aid to the Church in Need International (ACN).

Since the beginning of the war in 2011, ACN has supported 326 projects in Aleppo, 53 this year alone. The mass is intended as a thank you for all the help ACN has provided, not only for the Catholic Church but also for other Christian denominations in the region.

In his invitation message, the archbishop explains: “We, here in Aleppo, are very grateful for all that you are doing for us, our Christian community and all those who are in trying moments of their life needing your help. Your support makes the families stay in the country. We ask you to continue supporting us, as we are in a particularly difficult moment, in which Aleppo is suffering.”

The celebration will be held next Sunday, 20 December 2020, at 6.30 pm local time at Our Lady of the Assumption, the Syrian Catholic Cathedral, and will be broadcasted live: