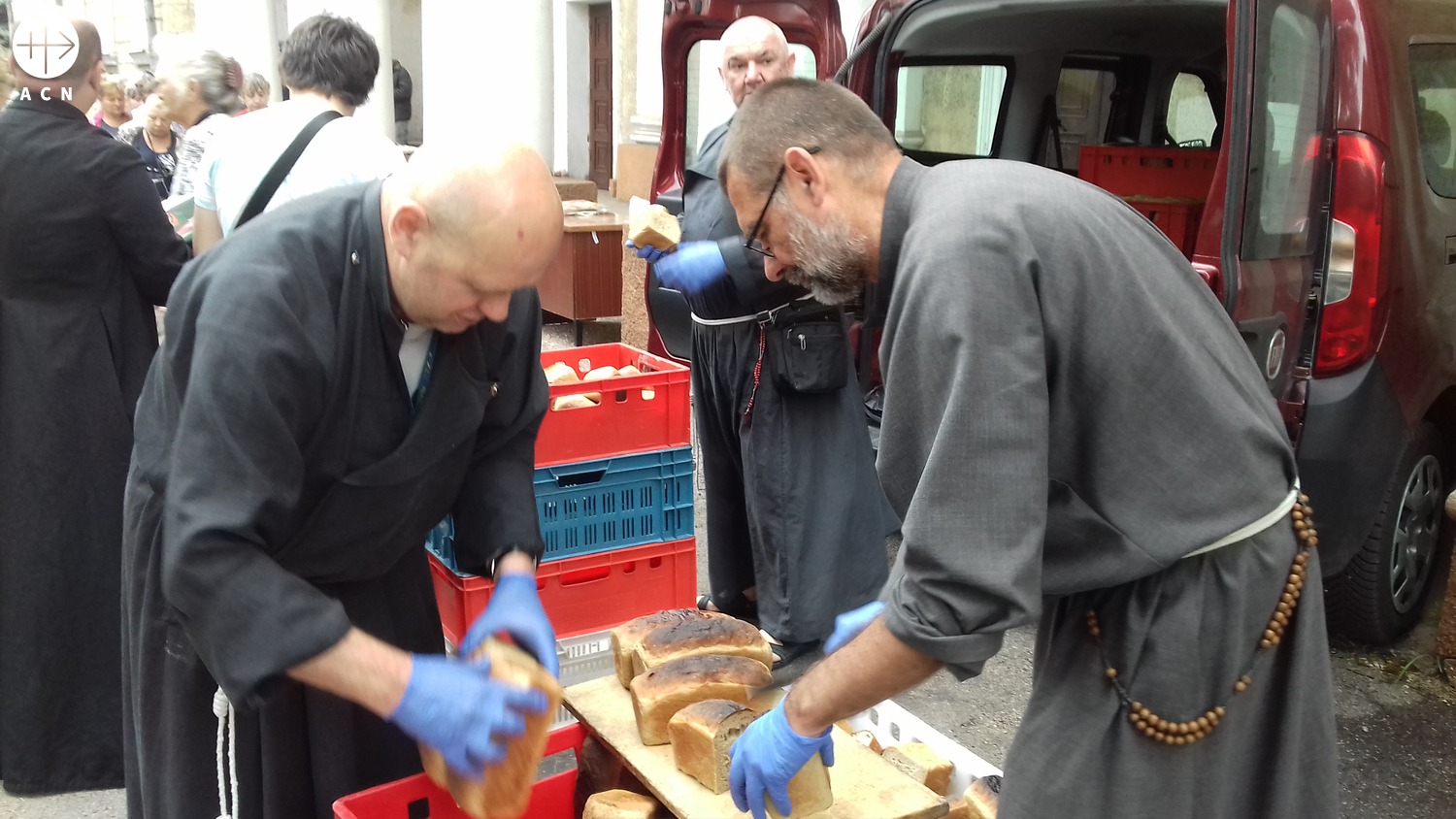 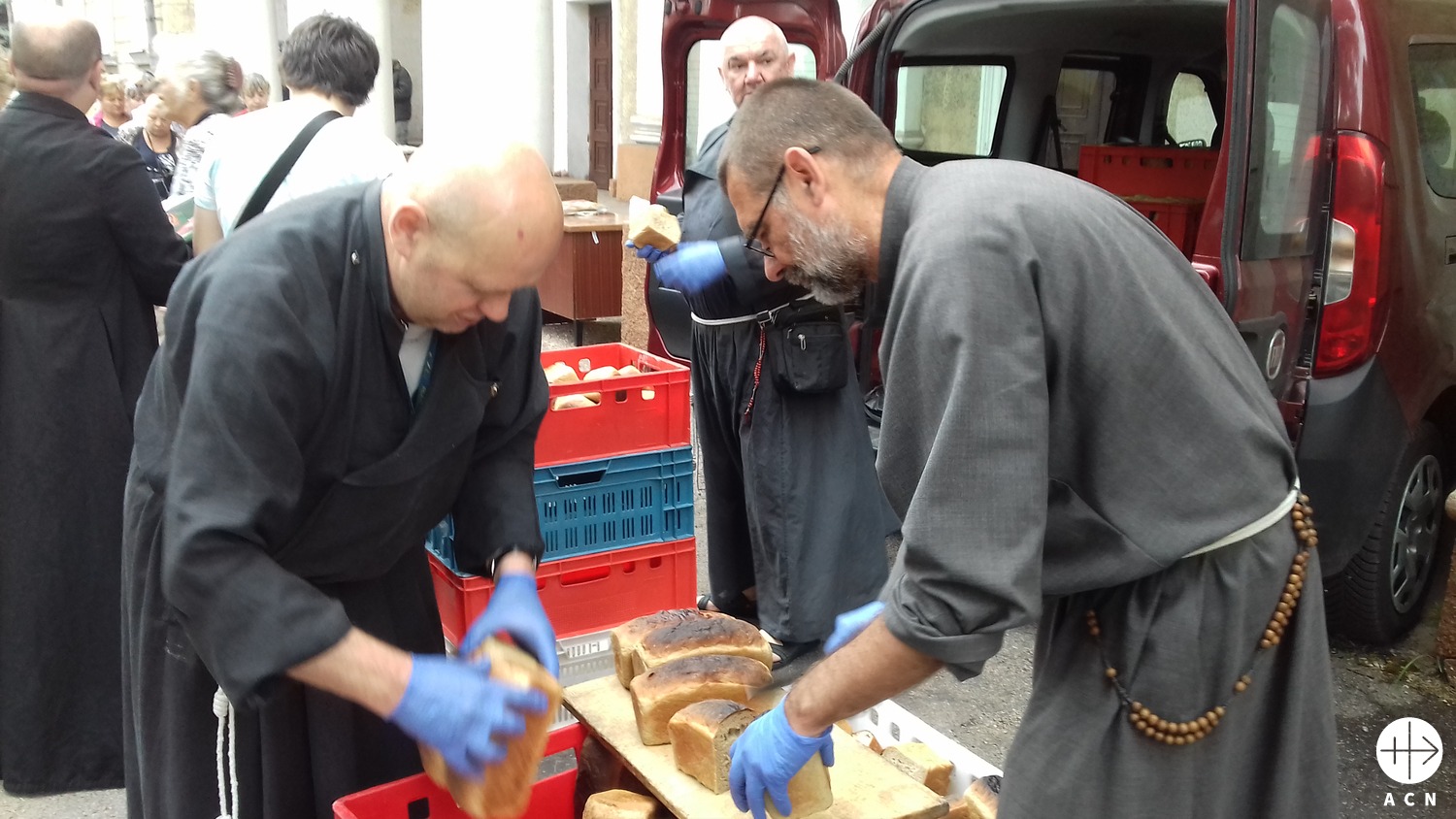 Ukraine: Missile attacks strike close to the house of the Albertine Brothers in Zaporizhzhia

The superior general of the Congregation of the Albertine Brothers, Brother Franciszek Grzelka of Poland, recently visited his fellow brothers and brought them a delivery of relief supplies.

The brothers run a soup kitchen and bakery as well as a shelter for homeless men in the southern Ukrainian city of Zaporizhzhia. During his stay, a missile attack struck close to the house of the congregation.

In an interview with the international Catholic pastoral charity Aid to the Church in Need (ACN), Brother Grzelka reported, “During the last night of our stay, the area was hit by a direct missile attack. Between two and three o’clock in the morning, there were about ten explosions in the city district in which our building is located. Several of these were very loud. The windows and walls of our house shook. As we later found out, a seven-storey building in the immediate area was destroyed. More than a dozen civilians were killed and about 50 were injured.”

These were not the first attacks. Brother Grzelka said, “There were a number of air raid warnings during the day and at night, but we did not hear any explosions in the immediate vicinity of our brothers. They told us that in the days before we arrived, the other side of the city, where they run their soup kitchen, had been under attack by missiles and drones. Brother Euzebiusz said that most of the attacks are launched at night, but there have also been explosions nearby when the meals were being served at about 10 in the morning. Luckily, none of the poor people were injured.”

According to Brother Grzelka, 1,300 people regularly come to collect relief supplies when these are passed out in the city centre. He helped to distribute the supplies during his visit and reported that, although the beneficiaries were mainly women with children, there were also quite a few men. He told ACN, “We were able to distribute the supplies without incident. Several of the recipients are homeless people who have been coming to us for years. The others are new people who have been forced by the war to rely on charity because the prices in the shops have shot up and there is little work to be had.” He said that there is also a large group of internally displaced persons who have come to Zaporizhzhia from regions in southern Ukraine that are occupied by Russian soldiers. “Since early March, there have been Russian forces about 50 km outside of the city. The front is close by, but the city is still in Ukrainian hands. Eighty per cent of Zaporizhzhia oblast is occupied. Recently, Putin held fictitious referenda also in Zaporizhzhia oblast before annexing this province into the Russian Federation ‘on paper’. The missile attacks on the city have greatly increased in number since then.”

ACN has supported the work of the Albertine Brothers in Ukraine for many years, for example with Mass stipends and subsistence aid, with donations of vehicles and with funding for maintenance and repair work on their buildings. The congregation of the Albertine brothers was founded in Poland. Brother Grzelka told ACN that, since the war started, the brothers have been organising transports of food and other necessary supplies such as generators and medical aid for their organisations in Ukraine. “Once a month, we carry out transports with two small lorries. The number of people who are in need has grown exponentially since the war began. In the past, about 150 persons made use of our services. By May, the number of guests at our soup kitchen and bakery had increased to 700. When the number exceeded 1,000, the municipal authorities decided that the area around the soup kitchen had become too dangerous for the gathering of such a large group of people and assigned us a new place for the distribution of food. The brothers began to pass out bread and food there, for example tinned food for the homeless and other foods for those who have accommodations and are able to prepare a meal for themselves at home.”

When asked for his opinion about the current situation, Brother Grzelka explained, “As Albertines, we do not concern ourselves with political or military analyses. We pray that Ukraine will be victorious, for the conversion of the aggressor and for peace for this tormented country. As long as we are able, we want to be there with them and live out our charism of helping those in need – of which there are many at the moment. We are grateful to everyone who supports our work both in Zaporizhzhia and in Lviv.”

The congregation of the Albertine Brothers is a small Polish congregation that belongs to the Order of St. Francis. It was founded in 1888 by Saint Albert Chmielowski. The charism of the Albertines focuses on service to the poor, particularly to the homeless. Currently, 34 brothers are serving in six houses in Poland and Ukraine. The Generalate of the congregation is located in Kraków, Poland. In Ukraine, the congregation has houses in Lviv and Zaporizhzhia. A special focus of their work is the pastoral care of the homeless. The brothers provide guidance to the men in the shelters on how to live according to the Gospel. They pray together, attend Holy Mass together and work on getting their lives in order. According to the brothers, many of the men have been abandoned by their families and have lost control over their lives. The brothers believe that the goal of their work with these men is to help them to “regain a sense of purpose in their lives”.

To make an offering to ACN's Ukraine Appeal visit www.aidtochurch.org/ukraine

Featured Image: The Albertine Fathers distributing relief goods to those in need in Zaporizhya. Copyright: Aid to the Church in Need.