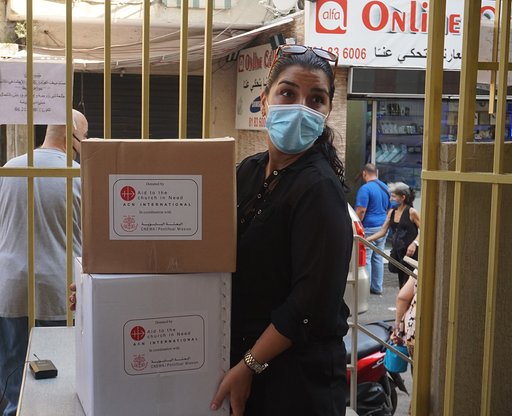 A Ray of Hope in Beirut

We ask for the sake of humanity for the whole world to put their hands together and help the people in Lebanon.

The anticipation that bare kitchen cupboards would soon be filled stirred a flurry of enthusiasm at the Socio-Medical Intercommunity Dispensary in the poor Beirut neighborhood of Nabaa. There, beneficiaries of the center gathered to receive food packages, thanks to the support of the international pontifical foundation Aid to the Church in Need.

Even before Lebanon’s severe economic crisis, Bassima said her family was “living on the edge,” hardly surviving on her husband’s earnings as a taxi driver. “Now I can barely feed my children,” said the 41-year-old mother of three. More than half of the Lebanese population currently lives below the poverty line, and the purchasing power of the national currency has decreased by 80% in less than a year.

Accompanied by her youngest child, three-year-old Charbel, who is named for the beloved Lebanese saint, Bassima explained, “If I were to go to the supermarket and purchase the least of these products, I would not have enough cash remaining to survive the rest of the month.  I can hardly buy anything nowadays.”

Each family food package -- divided between two boxes -- contains basics such as lentils and beans, canned items and cooking oil. “I am so thankful for this center,” Bassima said, balancing her boxes in a stroller to transport them home, little Charbel at her side. “The social worker and the sisters are always here to listen to me and help me.” 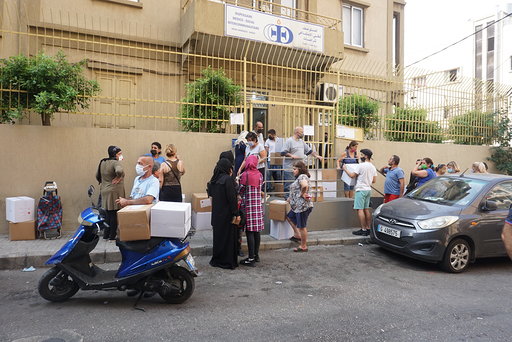 A total of 786 families benefited from the food package distribution at the Nabaa dispensary.  In all, more than 5,800 needy families are being helped through the ACN-funded initiative - in cooperation with CNEWA and Caritas - at several distribution centers in areas of Beirut affected by the August 4 catastrophic double-blast.

“There are so many poor people in the Naba area, so many needs,” stresses Sister Marie Justine el Osta, from the Maronite Sisters of the Holy Family, who serves as director of the dispensary.  “After the blast, the needs are rising.  People are struggling to live day by day, and with each day everything is getting more expensive,” she said of the country’s dire situation that is plunging the middle class into poverty. “I thank God that He sent ACN to organize together to help us.  It’s a sign that the Church is close to our people in their suffering.  I hope for more collaboration and projects to come,” said Sister Marie Justine.

When 33-year-old Abeer learned that ACN - and its partner CNEWA- both are pontifical organizations, she remarked excitedly:  “I want Pope Francis to know, I love him so much!  It’s one of my dreams to go there (to the Vatican) to meet him.” After being unemployed for nearly a year, exacerbated by the coronavirus lockdown, Abeer’s husband at last found work in the United Arab Emirates. The separation is difficult for Abeer’s family, as she cares for their four-year-old son in Lebanon.

“Thank God he has work now,” Abeer said. Previously Abeer worked as a cleaning lady in a school. It was Abeer’s way to help provide for her family. With a degree in hospitality management, she was not able to find a position in her field. “Sometimes you have to pass through difficult times just to appreciate what you have,” Abeer says.

“Jesus is very merciful, how he is helping us. Our only help is from this center. I feel so comfortable here. My son gets his checkups and vaccinations, everything. The sisters here are like a ray of hope, because it’s a very, very hard time we are suffering in Lebanon now.” Despite her struggles, Abeer believes that “God will never leave us.  I have a lot of faith.  That’s why I can stand up.  And I will teach my faith to my son,” she says with conviction.

“Lebanon is devastated.  We are going through the most difficult time in its history,” Sister Marie Justine stresses.“We ask -- for the sake of humanity -- for solidarity with Lebanon, for the whole world to put their hands together and help.”