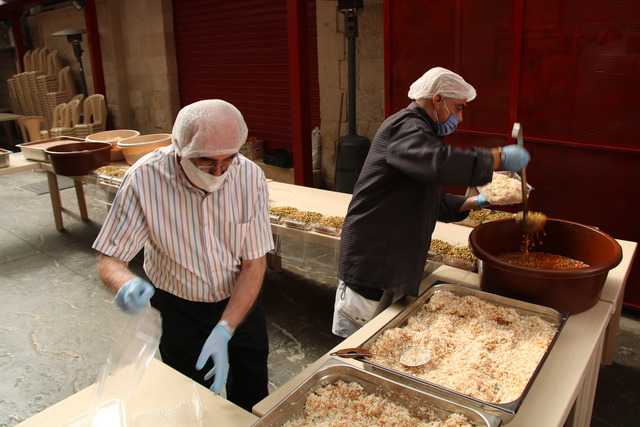 Lebanon: Despite the crisis, the Church will not abandon the refugees and the needy

Lebanon is the country that has taken in the highest number of refugees in the world, in proportion to its own population.

And the almost 1½ million refugees in the country also include many Christians. In the mainly Christian regions of the country, the local Catholic Church has been helping the poorest and most needy to find a place to live and obtain the basic necessities of life. An example of this is the Greek Melkite Catholic diocese of Zaleh, in the Bekaa Valley, close to the Syrian border. There are many Christian families here who have fled the war in neighbouring Syria and they are suffering terribly from the current crisis in Lebanon itself. ACN has no intention of abandoning them.

Many of these families feel terribly alone. Among them is the Rief family. They came here three years ago, fleeing the bombings and the war in Syria. The mother is a nurse, the father was a chef in a restaurant. They have three children, two of whom are adults now. Until recently they managed to get occasional work, whenever they were able, but as a result of the crisis they have lost their jobs and now nobody is bringing in any income to the family. Thanks to the support of ACN, the diocese is able to help them.

Since 2019 and up to the present time, the aid supplied by ACN for various projects in support of the refugees in Zahleh has come to a total of 3.6 million Euros. A considerable part of this aid includes paying rent and providing some kind of accommodation for people like the Rief family. Another major part goes on providing basic necessities such as food, clothing and essential medication.

One of the aid projects run by the Greek Melkite Catholic Church in the country since December 2015 is the daily meals service known as the St John the Merciful Table. St John the Merciful was a saint renowned for his great love of the poor. Wherever he saw any need, he sought with all his energies and means to alleviate it. When he was Patriarch of Alexandria he fed 7,900 people every day. He died around the year 619 and is venerated today as a saint by both Catholic and Orthodox Christians.

The food kitchen in Zahleh is a regular meeting place for people who cannot afford a hot meal each day. Among them are many Syrian refugees, but also a steadily growing number of Lebanese as well. Every day around 1,000 people are given a hot meal here. In the past, they used to come and eat at the various centres. However, with the arrival of the pandemic, around 800 people now come here to collect a hot meal to take away, while for the remaining 200 or so, who are either incapacitated or unwell, the meals are brought to them at home. At the same time, they are able to enjoy some human contact and spiritual counselling.

One of the people who comes every day is Labiba, who now lives together with her two unmarried sisters in a room measuring just five square metres. They came here from Homs two months ago because they were dying of hunger. The economic crisis had made it impossible for them to find work and they arrived with just the clothes on their backs. They are unable to cook either because the room they live in has just two divan beds where they sleep and a small paraffin stove. They are profoundly grateful to be able to eat at least one hot meal a day, thanks to the St John the Merciful Table.

The people who come not only receive food for the body but also psychological and spiritual support and encouragement. They all agree that their faith is their sole source of strength and that it is only thanks to this that they are able to endure the poverty and hardship and exercise patience in the midst of their suffering.

Featured Image: Preparing the food in the St John the Merciful Table. Photographer: Maria Lozano. Copyright: Aid to the Church in Need.