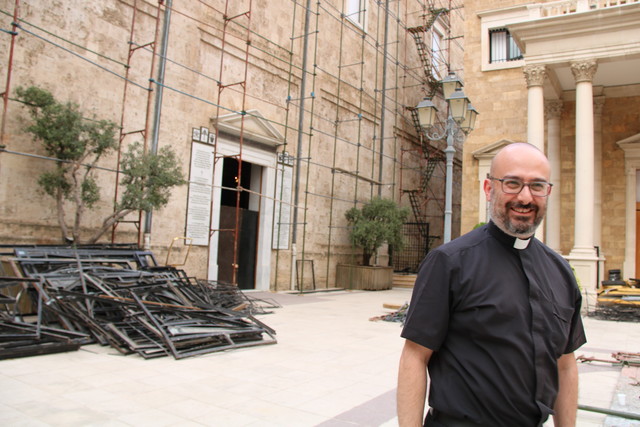 Lebanon: “Hope is our daily bread“

An interview with the parish priest at the Maronite Catholic cathedral in Beirut.

Lebanon is often held up as a model for the entire Middle East, not least because of the comparative stability of inter-faith relations within the country. Yet the balance has shifted and become increasingly unstable after more and more Christians have left their homeland. In August 2020 Beirut was shaken by one of the most violent peacetime explosions in human history. Now the Lebanese capital faces an existential crisis – and with it the entire country – already plagued by economic mismanagement and corruption, and by a political and banking crisis.

Father Jad Chlouk, aged 38, is the parish priest at the Maronite Cathedral of Saint George in Beirut. He describes how the Church is present and helping all the needy. The cathedral itself was also badly damaged by the explosion. The international Catholic pastoral charity and pontifical foundation Aid to the Church in Need (ACN International) is funding the restoration work on this cathedral and on 16 other Church properties in Beirut.

Life in Beirut has not been the same since the explosion four months ago. What is the mood in the city like today?

We are still shocked by what happened in August. Memories of that horrific day come back often, especially when we see the ruined houses, churches, schools and hospitals, or when we hear a sudden noise like thunder. We couldn‘t but be reminded of that incident!

The mood is still distressed and anxious, but despite everything, we are preparing ourselves as much as possible to live the coming feast and renew our spiritual life.

The Christian neighbourhoods were particularly hard hit by the explosion at the start of August 2020, because they are close to the harbour. The Maronite Cathedral where you are pastor was also badly damaged. ACN is supporting the reconstruction. How far has the repair work progressed by now, at the onset of winter?

The rehabilitation of the Maronite Cathedral started a month ago when we tried some temporary measures to avoid further damage from the rain coming through the damaged roof and the shattered windows and doors. We expect to finish fixing the roof in a couple of weeks, while as for the other openings, the fixing of the damaged windows and doors, this work is still in progress.

To what extent has the Covid-19 pandemic affected the restoration and humanitarian aid work?

The Covid-19 pandemic has delayed the process of rehabilitation of the cathedral, especially during the 2 weeks of the lockdown period, when we had to apply for special permits to proceed with the work, while at the same time always respecting the safety measures, like social distancing and so forth. On the other hand, we tried to maintain the humanitarian aid because with the economic crisis the Lebanese people are currently experiencing, we need to be more present and close to our brothers and sisters in need. It was risky, but by adopting all the safety measures, we still kept our mission on track in order to serve them all better.

Immediately after the disaster, many young people, in particular, announced their intention to leave Lebanon now, because they no longer see any future for themselves in the country. Has that happened in practice, and what does it mean for the Christian community in Lebanon?

The statistics show that more than 380,000 requests for immigration were presented to the embassies of the EU and the countries of North America and that most of them were from Christians, who unfortunately now feel like strangers in their own home country. This is negatively affecting the whole Christian community because it is losing most of its brightest and best, and especially its young people, who are supposed to be the future of the Christians here. Hence, the number of Christians in the country is decreasing day by day, and this is badly affecting the situation and causing still more pressure for those who remain, in a situation where they might soon suffer from persecution. This is not a conspiracy theory; this is the reality that we have witnessed in our closest neighbours, including Syria, Iraq, Palestine, Jordan...

As you look towards the New Year, are you more worried, or is this worry outweighed by hope?

Hope is always our daily bread, especially in these dark times. Despite everything, we look towards the future with hope, because we know that our Lord Jesus Christ is the Master of history and that in His hands lie all our history and life. With Him and through Him we are sure that “all things work for good for those who love God” (Rom 8:28).

To watch a video on the reconstruction of the Maronite Cathedral go here.