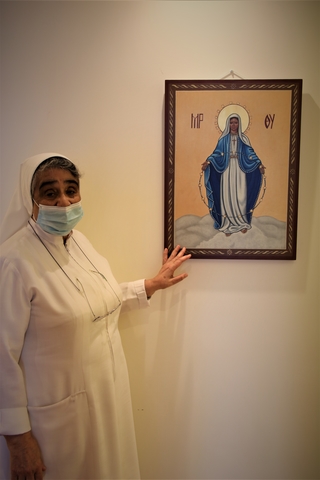 We have to rise again from the ruins

ACN is helping to rebuild the sisters’ convent on the ninth floor of the hospital building.

On the ninth floor of the building, the convent in which nine of the sisters normally live has also been badly damaged. One wall fell in on top of one of the sisters, wounding her arm. “But no one of them died. It was a miracle because the windows were blown in, scattering broken glass everywhere, and the ceilings in some of the sisters’ rooms were also brought down. So that’s why, despite my sadness, I give thanks to God and Our Lady of the Rosary for having protected us,” Sister Nicolas explains, as she points to, and indeed almost caresses, the picture of Our Lady of the Rosary that is hanging in the hallway of the convent. Another of the sisters, Sister Arlette, relates how she had gone into the bathroom to get some medicine when she heard a voice saying “go out, go out” and that made her take a step backwards, just a moment before the bathroom mirror and the whole of the bathroom ceiling came crashing down.

The hospital is situated in the Gemmayzé suburb of Beirut, less than 500 metres from the port. Before the explosion, it had 200 beds, plus some important and very modern medical facilities and operating theatres on its eighteen floors, nine of them underground and nine overground. But without doubt, the heart of the hospital, its hidden driving force, is the sisters themselves. “The hospital is not an end in itself, it is a means of helping our patients with all our energy and commitment to overcome some of the most difficult phases in their lives, times overshadowed by suffering, uncertainty and fear,” explains Sister Nicolas, the hospital director. All of the sisters combine their professional expertise in the various different hospital departments with their vocation of pastoral care and human spiritual concern for the patients and also for the hospital staff.

“Without them, the hospital would be a different place; they are the strength behind our work," says Maron Rabash, who has been working for twenty-eight years in the hospital. “This hospital, with its Christian ethos, is very necessary for Beirut. Many patients choose to come here because they know that they will be treated in an ethical manner,” explains this anaesthetist, still dressed in his scrubs.

The hospital, run by the Sisters of the Rosary, is situated in northeast Beirut in a densely populated quarter of the city. Before the blast, it served many families affected by the economic crisis. “Sometimes they couldn’t pay, so I asked them to pay half the cost, which was still impossible for many, so I said whatever they could afford or to pay in instalments,” Sister Nicolas explains. “This hospital was the Pearl of Beirut, and our chapel is the Pearl of the hospital. That’s where everyone could go: the staff – 80 doctors and 92 nurses – the patients and their family members, whenever they wanted to gain new strength, seek counsel and regain hope.”

At the moment only two floors in the hospital are still able to function. They have managed to repair one of the lifts so that they can take the patients upstairs to the operating theatre and for Covid tests. Sister Clotilde, the sister in charge of the nursing department, tells us that many of the nurses have been traumatised. Some of them were wounded and Jacqueline, a 60-year-old nurse, died as a result of the explosion. Her photograph stands at the entrance to the hospital, with a candle burning in front of it, accompanying her in prayer.

The sisters are used to difficult times. They still retain vivid memories of the experience of the last civil war. “Owing to our situation on the boundary between areas of different religions, our hospital was the place of refuge for all the patients without any discrimination. We gave all their time and devotion to caring for all the patients, even during the most difficult times, when there was no bread or other food available for several months.”

The sisters are seeking funding from international institutions and governments so that they can rebuild the hospital. The international Catholic pastoral charity and pontifical foundation Aid to the Church in Need (ACN International) has promised help to repair the sisters’ convent. Sister Nicolas has sent the following message to ACN’s benefactors: “I know that God is with us. I see it in the hands of so many people who have not forgotten us. With your help, we will be able to continue our work and start over again. We have to rise again from the ruins. Our Lady of the Holy Rosary will guide us in our work.”